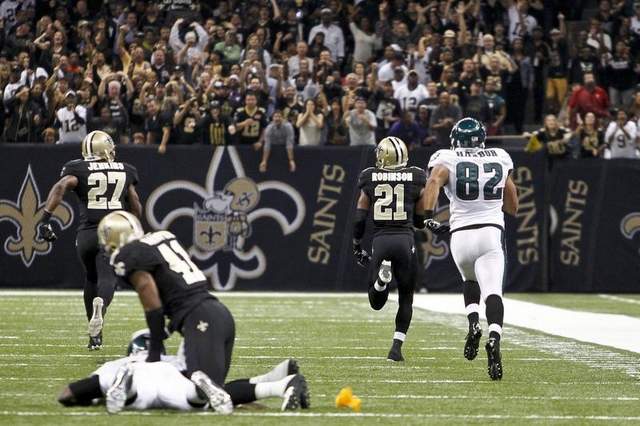 Eagles offensive masterminds Andy Reid and Marty Mornhinweg have not had a good game plan in the red zone.  They don’t have a group of plays which are effectively consistent down there and it’s the reason they can’t punch the ball in there when they get in the area.  It’s very obvious that they don’t have something to go to when they get in the red zone.

If was kind of ironic that a former Eagles assistant, Steve Spagnuolo would be the one to expose them for the poor design of the offense.  I’ve said before that they lack a power running game in the red zone with left tackle Jason Peters sidelined with the Achilles tendon tear.  There’s no excuse for Reid and Mornhinweg not having designed some effective running plays in red zone to use without Peters because they knew during part of the off season that he wasn’t going to be available.

They’re being forced to rely on plays which were successful five to ten years ago, but are now easily defended.  How many times have they shifted into split backs and run the shovel pass?  Teams didn’t adjust to it for many years of Reid’s tenure here.  The Birds would shift to split backs and Donovan McNabb would flip the ball to Brian Westbrook and he would trot into the end zone.  Michael Vick tried to flip the ball to LeSean McCoy the other night and the New Orleans linebacker were there waiting for it.

The Saints were also going to an automatic “zero” blitz every time the Birds shifted into an empty backfield.  Zero blitz means they’re sending everybody and there’s no safety help in the deep middle of the defense.  Without the running back in the backfield to block, a blitzer was in Vick’s face immediately and he’s got to get the ball out of his hands.  The free blitzer would force Vick to throw the ball away, throw the ball to a receiver who had to cut his route short, or mistakenly take the sack like he did when the Birds were in the red zone.

The Saints doubled Brent Celek, who was Vick’s number one target on the play which he was sacked.  Reid explained it all yesterday.

“It’s not that (Vick) he’s not picking it up. There’s going to be an extra guy and it’s his responsibility to get the ball out,” Reid said, referring to five blockers trying to pick up six rushers. “Or you’ve got to look at the receivers and make sure they’re doing their part, too.”

Their number one target in the red zone has become tight end Brent Celek and he’s been disappointing.  A couple of weeks ago against the Lions, he dropped a touchdown and had another one called back for offensive pass interference.  Of course you know what happened when Vick tried to go to him this week.  I’ve been telling you since the off season that Celek would be the key in the red zone because he’s their best receiver with some size.

They should have had Harbor going deep into the back of the end zone, so that he would have run cornerback Patrick Robinson out of the area and that would have given Celek more room to operate and of course Robinson  wouldn’t have been in the area to pick off the deflection.

You have to blame Reid and Howie Roseman for not having signed a wide receiver with some size.   Would Plaxico Burress and the eight touchdowns he scored last season have helped you this year?   A big receiver eliminates that problem in the red zone.  Check out all the top offenses in the league and all of them have a big receiver, who is an effective target in the red zone.

The Eagles don’t have physically dominant people on the line or amongst their offensive personnel to make a differenct in the red zone.