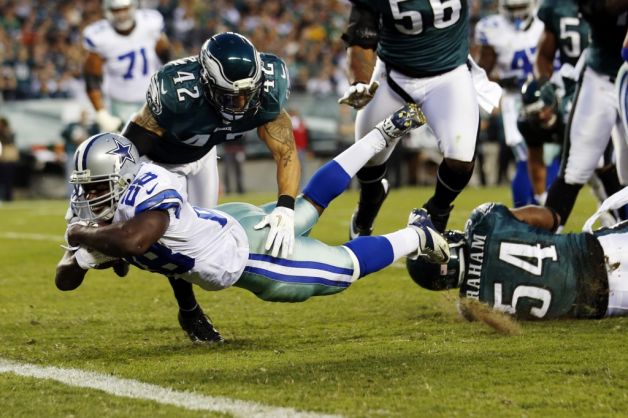 This was the Cowboys first possession of the game and they had driven the ball 69 yards from their twenty-yard line.  It was first and ten on the Eagles eleven.

Tony Romo took the snap and dropped straight back.  He turned and threw a quick screen to running back Felix Jones.

First safety Nate Allen comes up to make the play, but misses Jones by lunging at him as the running back cuts slightly back inside.  Cowboys tackle Tyron Smith forced Allen outside, but a good safety would have put a move on the offensive linemen and been able to slide underneath him to make the tackle, but Allen seems to be too cautious.  He doesn’t turn it loose.

Next up came Eagles cornerback Nnamdi Asomugha, who had Jones squared up in his sights.  He let Jones run right through his tackle.  He didn’t get the power in his legs by bending his knees and putting some explosion into the tackle. He was just kind of laying on the ball carrier.  It was a horrible job by Asomugha.  He has become a serious liability for the Birds.

Defensive end Darryl Tapp was in hot pursuit and he dove at Jones, just as Asomugha was missing the tackle.

Eagles linebacker Mychal Kendricks did a pathetic job on the play.  The play was to his side, but he didn’t even get a hand on Jones.  Kendricks was being blocked by Cowboys tight end Jason Witten when Jones caught the football five yards behind the line of scrimmage.  Witten held the block on Kendricks until Jones was in the end zone.

It seemed like Witten held the block for five minutes. There’s no way you can win in the NFL with a linebacker who stays on a block that long.  You can’t get dominated by a tight end like that and be a successful linebacker in the NFL.

If I were the defensive coordinator I would sit down with Kendricks and have a long conversation with him. I would let him know that a better effort would required or he couldn’t play for me.  They need to have the same conversation with Asomugha.

Both Asomugha and Kendricks failed to show me enough effort on that play.

Defensive end Brandon Graham dove at Jones as he came in pursuit, but he had no chance of making the play.

Safety Kurt Coleman dove at Jones as he was going into the end zone.

What Exactly Is A “Pretty Significant Concussion”?