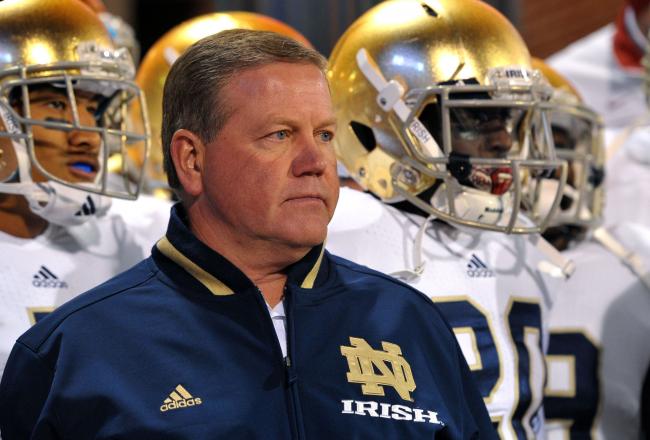 Notre Dame head coach Brian Kelly made it clear today that he was going to stay at Notre Dame and turn down an opportunity to be the head coach of the Philadelphia Eagles.

The Eagles released a statement tonight regarding their head coaching search and the fact that Penn State’s Bill O’Brien, Oregon’s Chip Kelly and now Notre Dame’s Kelly have all decided to stay with their schools and turn down opportunities to become the Eagles next head coach.

“There is no question we spent a considerable amount of time and effort looking at who we thought were the best collegiate candidates for our head coaching job. We did so knowing that there was a remote chance that these coaches would leave their current posts. We understood that going into the process, but we wanted to leave no stone unturned while trying to find the best head coach for the Philadelphia Eagles. We have no regrets about the effort we made in that direction and we will continue to proceed as planned in our search.”

Take as long as you need, just make sure to get the right guy.

This Statement from the former Ticket Sales Manager, Stadium Operations and an Event Planner at the Linc. That right, your President of the Philadelphia Eagles Don Smolenski.. Great time to be an Eagle Fan… Not..
Maybe Don should stick to Weddings or Concerts at the Linc, but leave the most important hire of the Eagles Franchise in 15 Years to a Football Professional

You take too long E-Money, there’s no one left.. Senoir Bowl Fanes are happen ing the be t 2 Weeks with Indy Combines about 40 days away
Who is there to scout these players, what Coach is going to coach them, what schemes are they going to employ and what College Prosoects and or Free agents best suit theses Schemes.. No e of this can occur effectively without a Head Coach with a Clearly Defined Mission, philosophy and a Staff in Place
Owner stated publicly that he knew that he was going to make a Coaching Change when the Eagles dropped to 4-8 and were bound for another losing Season which was the end of November.. Be judicious and explore all options but lets be crystal clear about this Eagles Coaching Search, time is not on the Eagles side for it doesn’t happen like this in Pro Sports like it does in the Business World when you can take months on making the correct hire, you do not have this Luxury in Pro Sports (or Big time College Sports for that matter)

Tom Clements, Mark Trestman,
Brad Seely or Mike Nolan will be the next HC

When did Bradley say that Paul?

He makes shit up

Reports from Seattle sources who say Bradley’s wife wants no part of East Coast.. And doesn’t want to raise their kids in a region full
Of rude and hateful people, deal with the Local Media along with the congestion, pollution, higher cost of living, safety and education of their kids

WOW, what a surprise! Everybody, but the 3 Amigos knew, that O’Brien, Kelly & Kelly, were using the process to up the ante at their Colleges, to get more $$$ & extensions, their staffs, & themselves. Keep wasting time boys, you’ve either talked to, inquired about, or interviewed, in double figures now, with no coach in site, meanwhile they have a man, who wants the job, is qualified, has local ties & support here, who Lurie already has conferred with, in Jon Gruden, but Lurie’s stubbornness, delusions & stupidity, is holding it up! His refusal, to give some say, to any incoming coaching candidate, is killing any opportunity to, as of now, to land him a coach. If he doesn’t swallow his pride, & change his thought process, we will wind up with a huge ???, or disappointment, at HC! Roseman, is a unqualified, ill-equipped, glorified gopher, with FOOTBALL acumen, & should have no say in nothing but finances, & salary cap issues! How the f^#@ does he qualify to tell anyone, who is an NFL player?!? All of us armchair GM’s, have better eyes for talent, than these imbeciles! Thus the reason, why we have a team of heartless, talentless, undersized, non-entity, turds, on this team, that needs to be nuked!!!!

Plus Gruden is completely over rated by the uneducated public… They like him mbecause he scowls on the sideline and gives them angry, ALL CAPS sound bites… Meanwhile his last year of coaching was a complete abortion overseeing a mutiny
You don’t have a better eye for anything, you are an angry frustrated fag wannabe

Say that to my face, internet puss! Anytime, anywhere! We’ll see who the fag is old man!!!!

Ok so we missed out on the top 3 candidates we wanted…. Plans 1, 2, and 3. Is there a plan 4 or the 4th best candidate. That’s supposed to make me the fan feel good. And the “Rooney Rule” is a joke. Why no interview for Stanford’s coach? To be honest what has Gus Bradley or Mike McCoy done. Gus gave a fiery tongue lashing to his Defense…shoot Ray Rhodes could do that…

What does any coach do before he’s hired? Belichik was a below average coach until he ‘discovered’ Brady. Tom coughlin got fired then won two SB… It’s all a crap shoot. John harvaugh was a special teams coach for Christs sake

Chuck, they talked to Shaw, he informed them he was staying.

To think that Roseman and Lurie weren’t gathering info is assanine on your part. They may be limp wristed fags but they are bright they were picking their brains

Paul has no clue…i’ve learned to ignore him…

Bradley or Arians will be the next coach

Unless, they plan on interviewing any of the Green Bay, New England, or San Francisco Coaches…that’s all that really left….Bradley, and Arians……I choose GUS

Paulman,
What happen to Dave Wannstadt?

He’s hanging out with frauds other sure thing…Donohue

He’s hanging home waiting for the Phone to ring,
The way this Eagles Coach Search is going, I wouldn’t discount him getting a call from the “Trey Fantasy Amigos”. Read them and Weep..

**Breaking News,
Per Golden Dome sources, Notre Dame HC and his Staff to receive
Compensation Packages as if any of this is a surprise to anyone
The NCAA and University are filing a suit against the NFL and the Eagles to stay away from their Coaches and Programs and will not allow future access to any Campus Airfield for Lurie’s Traveling Circus,
JH will up date everyone after he cleans his Basement per his Mom’s request

I keep hearing this Gruden is overrated mess. The Bucs traded away two 1st round picks to get him to lead an aging team with a shot to get a Superbowl….he did just that and ran over the eagles on his way in finishing what he was hired to do.

How could he build a team from scratch when the team was less 2 first round picks and 2 players traded a compensation for his services?

Look what the Raiders were before he got there…The garbage tuck rule cheated him out of one Superbowl and he played against the team he built in Oakland…in the Superbowl.

And he have spent a few years working with young QB’s picking the brains of innovative coaches, viewing the game from a different perspective which can only help his coaching acumen going forward.

The Eagles fans are a bunch a damn losers always claiming someone is not good enough. How would an Eagles fan know whats good enough?

Well, the guy who came in to tampa coaching an aged team kicked the Eagles ass before the Vet was blown up.

Chucky took down the Vet and he’s better than Andy Reid.

He was hired to win a SB.

Because all of the clueless, factless nitwits on here, say he won with Dungy’s team! But, what they fail to realize, is he rebuilt that entire Offense, that off-season, via FA, & changed the scheme entirely, to win that SB! BTW, the total compensation for Gruden- 2002 & 2003, 1st round draft picks, 2002 & 2004, 2nd round draft picks, & $8 million in cash for compensation for him! Damn!

He wasn’t my first choice, but he’d be an upgrade over some of the guys, they’ve interviewed so far! Billick is a good choice too, along with Bradley, Fangio & Roman.

Who cares what a Redskin fan has to say about the Eagles coaching choice? I know that I don’t. Why does a Redskins fan come on here anyway? Go find a Redskins site and talk about how YOUR coach may have cost the team it’s franchise QB because he was an idiot.

greenfan…I don’t care whether you care

I am not the loser who quit…”bought RGIII jerseys for all my boys”…..and then continues to come back on an Eagles site and think that anyone would think you have anything worth reading…..you were a loser before you quit on the team and you are a bigger loser now……go play with your new friends, because you are a fraud, and will always be a fraud.

Heard Rosie have a Kelly fetish…..the next guy to be interviewed for that head coaching job?

I BELIEVE I CAN FLY

LOL, funny stuff — one of the reasons i love to read the comment section on GCobb– Songs and Vinnie best Post Commenters