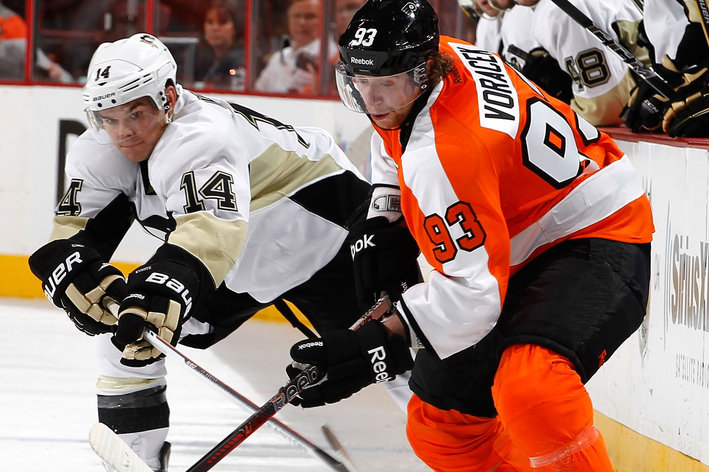 No one expected the first game for the Philadelphia Flyers in 256 days to go “smoothly.”

There were positive flourishes that caught everyone’s attention as much as there were rough patches of ugly, ugly hockey. In the end, the team couldn’t hit the ground running (or skating, if that analogy works better) and finished the day with a 3-1 loss to the rival Pittsburgh Penguins.

You can’t argue that the team didn’t show up to play when the puck dropped, but the energy wasn’t focused nor the communication clear.

Tyler Kennedy was credited with the first goal of the game- a re-direction of a shot from the point by defenseman Paul Martin during a power play. The puck may have hit defenseman Luke Schenn first, but there’s not much to really argue about there. It’s the type of goal that haunted Ilya Bryzgalov last season and hopefully this will be the last of it’s kind.

“It was tough. You get down 2-0 and the shots aren’t in your favor,” said head coach Peter Laviolette in the post-game presser. “That first goal is a tough one, just a redirect kind of a fluke, but we’ve got to have better execution on that face off goal.”

The line combinations that began the game will probably be in place for tomorrow’s game in Buffalo, but there’s no reason to believe these will remain intact indefinitely. Some players had stronger games than others, as the quality of passing between players and puck control in the neutral zone were spotty at best.

“There seemed to be a little bit of rust out there,” said Laviolette. “Our passing was a touch off. We had a lot of passes that seemed to go into skates and breakouts in netural zone movement. I think that will come with time, but there’s definitely room for improvement as far as that goes.”

Brayden Schenn had a quiet game with Claude Giroux and Scott Hartnell, who were in a world of their own out there. Giroux tapped in a bouncing pass from Hartnell early in the second period to cut the deficit in half.

Giroux nearly collected a breakaway pass at the 9:04 mark of the third period, but just missed being on-sides.

Wayne Simmonds and Matt Read were arguably the best forwards out there, with Read finishing with an unusually high six hits on the scoresheet. Rookie Scott Laughton played decently on their line in his NHL debut, but I can’t help but feel he weakened the line’s offensive chances.

That’s not to say he doesn’t deserve to be on the team- simply that there is still a lot for the 18 year-old to learn at this level and that a more established player would be better suited for providing offense on the upper lines. Laughton also had difficulty with being muscled off the puck.

“I thought he played a strong game for us,” said Laviolette. “He was responsible defensively, he had four or five good hits, he was strong in the puck battles and had a couple opportunities at the net. I thought he did a nice job. It’s a tough situation to come into for a young kid. First game, in Philadelphia, sold out building, on NBC, but I thought he handled it really well.”

One other area of praise worth mentioning in the first game is the “new and improved” Zac Rinaldo. He may have been quieter than usual on the ice, but that’s actually a positive for the team. He stayed out of the box, delivered strong hits and played well in the offensive zone.

Special teams needs some work, as the penalty kill was 2-for-3 and the powerplay went 0-for-5. Laviolette praised the first powerplay unit, which features Jake Voracek and Kimmo Timonen on the points, but noted that “the second unit is new and might take a little bit of time.” The second unit featured Andrej Meszaros and Kurtis Foster on the points.

In spite of the score, Bryzgalov appeared focused and dialed in for the duration of the game, stopping 24 of 26 shots. I’m not worried about him moving forward as much as I am with the collective balance of the offense.

It’s only been one game, but with a shortened season, every lost two points is going to hurt the team in two months.

Who Will Quarterback The Eagles in 2013?

It’s going to a be a “Long” Short Season I’m afraid for the Flyboys
When Simmonds is one of your Stronger Forwards, your in Trouble,
The guy can’t stay on his Skates …

We just might have, one of the slowest, non-passing teams in the NHL, again. If they think just being physical every night, is going to succeed, they’re going to have a loooong, short season, as Paul stated. We have almost the same exact team as the failed team from last year, you didn’t exactly think we were going to win a cup, with this DF & goalie, did you? I like the Schenn-JVR trade, but who exactly on this DF is going to move the puck, get shots on net, & get points? Other than the ancient Timonen, NO ONE is offensively gifted! Coburn is an overrated waste, Meszaros looks 30 lbs overweight & is coming off of major surgery, Grossman & Schenn are solid, hard hitting, stay-at-home defensemen, & Foster, Gervais, Lilja are just guys. It’s only the 1st game, so lets hope they get their legs soon, or it’s NFL Draft time, & pitchers & catchers to await! More to be disappointed about! SHEEESH!!!!

Dcar, overly optimistic as usual, it’s too early to judge anything because it is obvious that the flyers don’t have their legs yet,nthey had no speed yesterday which I attribute to not being game ready yet

LOL Jake, I’ve stated that it is 1st game & need to get their legs, but that doesn’t change the facts, that I’ve stated.

The most Overrated Sports Franchise in America are these Flyers
Worse than the Cowboys and Yankees who actually won have some Championships in the last 25 Years. As long as Ed “Mafia Wannabe” Snider is running the Show, more disappointment and underachievement we will see from the Orange & Black.. This is my story and I am sticking with it until proven otherwise..

Eagles haven’t one since 1960. That’s my story and I am sticking to it.

Cripes. Let’s close down the Wells Fargo Center. It was 1 game. Effin relax. Can we at least get 10 games into the season before you abandon ship? You knew coming into the season, they would have problems defensively. That is why they tried to get Weber. They also have a ton of young players who need to mature into their roles especially with Briere out of the lineup.

And that is Simmonds who had 28 goals last year Pman? He is not the best skater but that is not his role. His role is to much it up in front of the net and get some dirty goals. I am not sure what is going to happen this season but I am looking forward to watching the young kids develop.

Bad first period doomed them. Played well the rest of the game. SImilar pattern to last year. Bryz played well. I will say it now after one game. The PP needs work. With 5 chances you need to get at least one.

Man, it is ONE game. No training camp, very little practice. No patience from the guys on these pages. Relax! It’s like the responders on this site talking about Foles is going to be good or Foles sucks. Let things or QB play a little. Lets see what the Flyers look like around the 20 game mark. Geez!

Paulman, Andy Reid and his era most overrated team in all of sports, you just have a hard on for devout flyers fans

Terrible call from ref. Score should 1-1 at Buffalo

I’m not the best hockey e pert but who picked the flyers to win the cup this year? Or any year for the matter in the last decade? It’s always been that the flyers have a solid team but will likely be doomed come chances for the cup due to their goalie. And that’s been the truth for the most part. So how is that overrated? It’s not at all. Flyers fans are some of the best in all sports. All that matters to me is getting in the playoffs. Cause as we just saw last year anything can happen. On top of that I’m just happy to watch flyers hockey on tv ESP after the piss poor eagles season we just had and with that thief Andrew Bynum who we have to read more bullshit about

Bingo! All you want from any of our teams is to get in the playoffs and see what happens. Good job.

Remember that Eagles Juggernaut in 2004. Didn’t win. What happened to that dream team from a couple of years ago? didn’t do squat.
Giants wild card team? Wins SB
Phillies juggernaut in /2011. didn’t win.

Did anyone pick the LA kings to win last year? The 8th seed?

I don’t think so!

And regardless of what happens this town will always be a football town. It’s just the way it is here which is why we’re harder on our football team more than any of the others. Also they are the ones that have never delivered a modern day championship when the others have. But when they finally do which I hope is sometime soon it will be beyond any parade Philly has ever experienced.

Spot on. If the Eagles ever capture a SB the parade will dwarf anything that the Phillies or Flyers have ever done.

Only those in Philly have overrated the Eagles, I stated for 2-3 Seasons that their window was closed for any legitimate Super Bowl Run after the Best of the McNabb era ended about in 2006-2007 after that knee Injury he was never the same to go along with this Ankle issues either
I stated the last 2 Seasons after the Summer Camps that they were a
8-9 Win Season Team at best, so the rebuilding process here in 2013 is about 2 years too late in my opinion, but what do I know ..

Don Massenhoven stinks as a referee. He needs to be sent to the WCHL for further training.

Flyers are not a good Team, any way you look at it,
Play the kids and use Hartnell, Talbot, Briere as Trade Bait for the the Teams that have a legitimate shot

You got to relax a little. It is game #2 Look at the 20 game mark. Did you cash in The Eagles season when they dropped to 3-3 after their start?