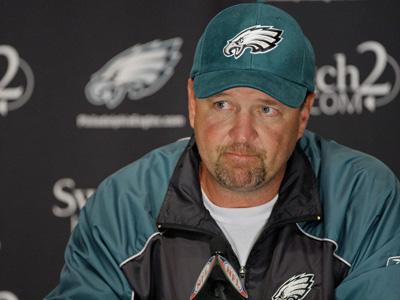 Coaching in the NFL is all about having the right relationships.  Last year the Birds were 4-12, yet both their offensive and defensive coordinators had no trouble getting job as soon as they were given the freedom to talk to other teams.

The Eagles offense had many problems a year ago, but the New York Jets were even worse and that may be part of the reason Eagles offensive coordinator Marty Mornhinweg will be taking the same position with Rex Ryan and the Jets.  During his time with the Eagles, Mornhinweg oversaw some outstanding Eagles offenses, which were amongst the most explosive and productive in the league.

Like former Birds head coach Andy Reid, Mornhinweg has an affinity for throwing the football.  Mornhinweg was here when the Eagles went to the Super Bowl after the 2004 season.  Mornhinweg has been very good at working with quarterbacks, like Donovan McNabb, A.J. Feeley, Jeff Garcia and Michael Vick.  Prior to his time in Philadelphia, he was head coach of the Detroit Lions, but that didn’t go too well.

He was running a 49ers offense, which was just about unstoppable, when Steve Young led San Francisco to a Super Bowl title back in the mid-90’s.

I’m sure that his success with those quarterbacks is the main reason, he’s getting the opportunity with the Jets.  He’ll be asked to straighten out New York quarterback Mark Sanchez.

The Eagles defense was probably the worst defense in the league at the end of the 2012 season.  They just flat out quit in the last game of the season against the Giants, yet former Indianapolis Colts offensive coordinator and NFL Coach of the Year, Bruce Arians, is bringing the guy who ran that defense, Todd Bowles, to Arizona with him.

The Eagles gave Bowles permission to talk to other teams and the Birds coach will be leading the Cardinals defense in the upcoming season.  Hopefully for he and the Cardinals, he will get much better production out of the Cardinals than he got out of the Eagles.

Correction – The Eagles backfield was a bright spot under Bowles until he was moved to DC. After that move the team made Bobby April Jr. the defensive backs coach. How did that move work out?

Bright spot?!? WTF secondary, did you watch! DRC played well for the 1st few games, then went into the witness protection program, & the rest of the secondary was a barren waste land! BTW, moving Toilet Bowles to DC, made a horrid DF, even WORSE! How did that move work out?

Bowles and Washburn fightihng, then Marty and Andy fighting, now Jeff and Joe
Can’t we all get along LOL

How the Cardinals let Horton leave in the first place is crazy, hiring Bowles to replace him is even crazier. I could care less about the both of them at this point, just glad their both out of here, Zordich and Caldwell has to go next, we need a clean slate, the only one i’d keep is Duece.

I think the RB Coach (names escapes me) is still with the Eagles isn’t he or did he go with Chiefs with AR??

Ted Williams and Duce Staley are being retained. Williams has been with Eagles since 1995.

Glad Duece is staying. Honestly…. maybe he could solve our FB woes. haha. Oh wait… we wont need a FB in this system.

How in the world is Andy Reid more appealing than Lovie Smith to be a HEAD COACH?

The appex of both’s career was to make it to the Superbowl and loose.

Yet untested college guy gets the Eagles Job…

Cower, Gruden, and Bilick certainly deserve a shot if they wanted one, but each seems to want a perfect situation to return to coaching.

I don’t know what Lovie wants. But he darn sure is more qualified that Andy Reid and no experience college guy.

Norv is just a coordinator now, if lovie wanted a DC Job he’d get it in a minute. Why he didn’t get a HC job is a great question… I guess because he has no pizzzazz. Or something I was leaning in his direction but I guess he isn’t a sexy name

Bowles problems with the Eagles was WIDE 9 GUY.

Buy the time he got to run his defense, the loser mentality had set in.

Pretty in Pink is garbage and should have been benched.

The high paid stars had no motivation for maximum effort since everybody knew Andy was getting fired.

Laugh as Banner all you want, but he held the purse strings tight and keep them playing hard. Andy reversed and paid everybody and they all quit playing.

It’s hard to eat a McBurger after you just dinned at Wolf Gang Pucks. You just are’nt hungry.

Bowles is a competent DC put in a losing situation last yr , WITH WASHBURN UNDERMINING EVERYTHING, I wish him well in Ariz

Movie Smith will return next Season
Maybe the Cowboys, Jets, Titans, Raiders, Panthers who will be looking for A HC if these Teams show marked improvement
Lovie making $4 Million in 2013 not to work so don’t feel too bad for him..

Latest rumor I hear is the birds are going to talk to Giants linebacker coach Jim Herrman about DC position. Interesting possibility.

I just read the same thing about Jim Herrman, I also read his bio, after reading it, I wouldn’t have no problem if they hired him.

I agree I would not have issue. Has NFL experience and Hopefully has an idea of what types of players it would take to rebuild this defense after his time with the Giants.

@phillyfan and @Andrew p where did u guys read the info about Jim herrman? Just wondering. You really get no info on here.

According to SB Nation the birds are talking to Bill McGovern ,Boston College DC as their LB coach.