Colin Kaepernick Will Have To Beat The Ravens With His Arm 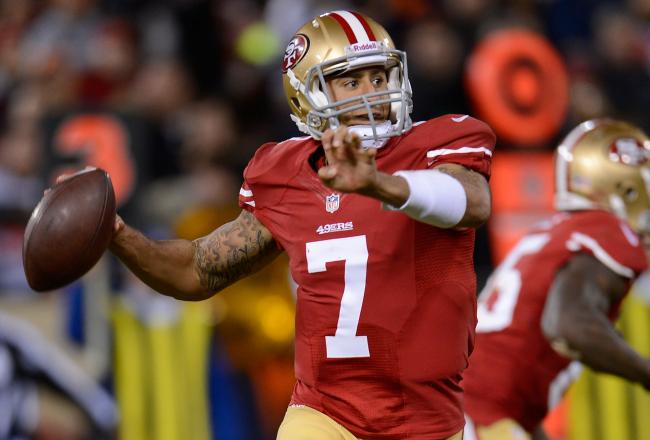 As for this Sunday’s Super Bowl, I’m awed by the talent on the San Francisco 49ers roster on both the offensive side and the defensive side.   They are clearly the most talented football team in the NFL.  You’ve got to give their front office a lot of credit for amassing so much talent.

Still having an advantage from a talent standpoint doesn’t guarantee victory.  You can lose the game because of a strategy mistake, even though you may have much more talent.

Despite not having the most talented defense in the NFL, I’ve been very impressed by the Baltimore defense because of their defensive strategies.  The defensive coaching staff of the Ravens confused and slowed down both Peyton Manning and Tom Brady in consecutive weeks.  Manning and Brady are two of the smartest quarterbacks in NFL history, but the Ravens defense had them unsure of themselves.

They’ve had two weeks to get ready for Colin Kaepernick and the Niners, so I’m very interested in what Baltimore will do defensively.  Ray Lewis gave some of his thinking regarding what they’re going to do to stop the Kaepernick, Frank Gore and the Niners running game.

“They’re doing a good job with it,” Lewis said yesterday in New Orleans. “At the same time, when you do watch the film, a lot of people who played against them just never communicated at all.

Lewis talked about the mistakes the Packers and the Falcons made in defensing the read option attack out of the pistol formation.

“You can tell that a lot of people playing against the read-option just played as individuals,” Lewis said. “It’s really hard to play that type of package as individuals. You have to play it as a group.

“If you (want) to try to slow it down, that’s the only way to slow it down is to really play it as a group and make sure before the snap that everyone is on the same page.”

In the Green Bay game, outside linebacker, Erik Walden was responsible for tackling Kaepernick when they ran the read option his way, but he went inside to help on Gore, even though somebody else was responsible for the running back.  When he went inside, Kaepernick pulled the ball out of Gore’s stomach after the fake and kept it, then turned on the afterburners while going around the corner on the way to the goalline.  Every defensive player has to do his job.  They can’t be undisciplined.

In the Atlanta game, the Falcons made the mistake of keeping their outside linebackers outside and upfield to take away Kaepernick, but they opened up a gaping hole for Gore and LaMichael James, when they moved so far outside and upfield.  You can’t telegraph to the quarterback, which defender is going to take the running back and which defender is going to take the quarterback.  You have to keep him guessing until the last split second when you have to decide.

Neither the Packers, nor the Falcons have been able to stop Kaepernick and the Niners from running the ball, but the Ravens defensive coaching staff has proven they’re ahead of rest of the league.  They will have a plan to stop this running game, so that it doesn’t dominate the game.

I believe the Ravens defensive will play assignment football with one player assigned to tackle Gore and another will be assigned to Kaepernick.  I think the Ravens discipline will help them slow down the Niners.

I don’t think that the pistol formation and the read-option are going to beat the Ravens, I believe Kaepernick will have to beat Baltimore with his arm and his scrambling ability because I think they’ll be ready for the pistol and read option.

One of the great strengths of Kaepernick is the fact that he can put all of the pistol and read option weapons down and drop into the pocket and throw for 300 yards without doing anything with his legs.  I could see the Niners getting Lewis isolated one-on-one and beating with passes to Gore and especially, LaMichael James.

Randall Cunningham Was Just 25 Years Ahead Of His Time

Ravens Rookie FG Kicker wins it with a 37 Yard FG with under a minute to Play.
Star of the Game … RB Bernard Pierce adn TE Eugene Dixon with a big Catch and Run on the winning Drive.. .

A small donation to the blue hen sports boosters would seem appropriate!

Hahaha! Going toward my baby Girl’s college next year, if I’m blessed with the W. But the betting this week (for amusement only, of course), could be a possible donation. LMFBO!!!!

Send her to UD and my wife will take her to dinner once a week and make sure no a.hole dates her! Go flacco!

LOL! Thanks for the offer. She is going Florida St. My twin Boys are Freshman there, they have that covered. My Brother lives in Tallahassee too, he boards them, & keeps an eye on them for me. Thank God.

Yeah, lace his Shirley Temples with roofies, & dump him in Siberia! LOOOOOOOL!!!!

The only person still drinking “Shirley Temple’s” is JH… What a Dweeb that Kid Is… Ha..Ha ..

Aw now isnt this nice, father and son tag teaming the Big Bad JH haha cant win in a 1 on 1 discussion so you two have to resort to this hahah rofl.. Its great to be me.. Btw when jakedog said JH he was talking about John Harbaugh you clowns, how slow can you guys be? hahaha