Randall Cunningham Was Just 25 Years Ahead Of His Time 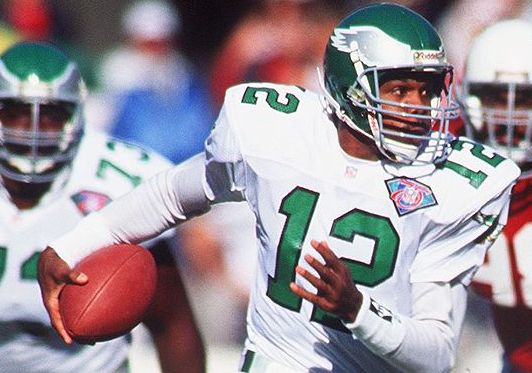 A couple of weeks ago, I texted my buddy and former Eagles teammate, Randall Cunningham when I saw him on one of the pregame shows leading up to the NFL playoffs.  They interviewed him and San Francisco 49ers quarterback Colin Kaepernick as youngster talked about studying tapes of Randall, Michael Vick, Vince Young, and Steve Young during his high school and college years.

When I saw Kaepernick running the read option against the Green Bay Packers and the Altanta Falcons, I couldn’t help but think about Randall because he had the same ability, but was clearly 25 years ahead of the time.   They let Randall scramble and keep the ball on some bootlegs, but they didn’t have set plays to utilize his speed and athleticism.

Buddy Ryan used to tell him to just make something happen and that worked during the regular season, but in the playoffs with the outstanding teams and defenses like the Washington Redskins, New York Giants, Chicago Bears and San Francisco 49ers standing in the path to the Super Bowl, Cunningham and the Eagles offense couldn’t be counted on to consistently put points on the board.

This is one of the reasons I’m looking forward to seeing what Eagles new head coach Chip Kelly employs offensively to move the football against NFL defenses. Kelly has revolutionized the college and NFL game, by finding a way to utilize the speed of the quarterback.

That pistol formation, which the San Francisco 49ers used against both the Packers and the Falcons was borrowed by Jim Harbaugh and Niners offensive coordinator Greg Roman from Kelly, after Oregon had pummeled the Stanford, when the Niners coaches were there in the Pac-12.  They kept those tapes and pulled them out when they drafted Kaepernick.

Of course Kelly had picked up the Pistol formation and read option offense from Nevada head coach Chris Ault, who has coached Kaepernick during his college career.  Ault is the inventor of the pistol formation.

I couldn’t help but laugh, when Cunningham called me back after I had texted him.  He let me know that Kelly had been recruiting his son, who is a All-American high school quarterback in Las Vegas to Oregon.  Randall has been texting me during his son’s high school career and giving me his stats and athletic ability.  Randall Cunningham II is 6’5″, he high jumps 7’2″ and can run a 4’5″ in the forty yard dash as a high school junior.  Don’t rule out the chance that we will see the second edition of Randall Cunningham here in Philadelphia.

Colin Kaepernick Will Have To Beat The Ravens With His Arm

That pistol formation, which the San Francisco 49ers used against both the Packers and the Falcons was borrowed by Jim Harbaugh and Niners offensive coordinator Greg Roman from Kelly.

gcobb. jim harbaugh and greg roman pickup the pistol formation from chris ault of nevada where colin keapernick went to school. but you make a great point randell would have been great in this offensive attack.

recalling i remember randall with a broken leg , and thats about it ! he never miised much time with injuries . which is what the birds are in need of : a 16 game QB .

The pistol formation is not what Kelly did at Oregon.

Kelly’s backfield lined-up in the inside and outside zone read formation.

Chris Ault created the the “Pistol Formation” but Kelly used it against Stanford and their up close experience of getting spanked with it probably did influence them more then Nevada would have.

It would be nice to see Randal Cunningham Jr. in Philly, but there are going to be a lot of NFL teams wanting to kick those tires.

No – Kelly never use the pistol formation. Not one time in his entire coaching career.

In a recent interview, Chip Kelly was asked this question….

Q. One of the recent trends in the NFL is more pistol formation. People are tracing that back to you. Your thoughts on what seems to be a melding of the NFL and college games.

COACH KELLY: Don’t know. Haven’t been there. Don’t run the pistol offense. That’s not what we do.

Nice Story, to reminice, not sure waht relevance it has in 2013..
It would be great if Chuck Bednarick and Reggy White were playing for the Eagles

Great memories..the ultimate weapon would be a star today with an offense actually designed to take advantage of his skills. Big Randell fan, and it will be intersting to see how well his son can play.

Loved Randall, his son as a junior was a backup qb, that doesn’t necessarily sway, since he looks young and projects, he’s 6’5″ and under 200, a late bloomer like his dad , we will see

Randall was at his best when he was with the Vikings and used his legs to buy time to pass if necessary, he turned into a good pocket passer

But he was the best athlete to ever play qb, hands down

Randell was so good Buddy Ryan didnt even have a designed offense.. He told him to just go out there and play.

Randall was money or as Randy Moss would say straight cash homie. We all still wonder what could have been if Randall was truly coached. I still haven’t forgiven Gary Anderson for costing Randall his chance of going to a Super Bowl.

it is like harking back to simpler times…. so many beloved players. If they had only won something they would own the town, they would have trumped the cup flyers….
Fing FOG BOWL!!!!!! i HATE YOU!