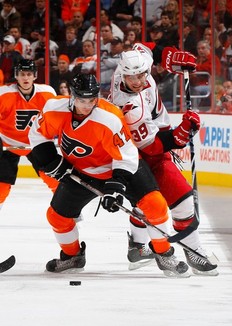 Wayne Simmonds sat out Saturday night’s tilt against the Carolina Hurricanes with concussion issues after taking an errant elbow to the head from Washington Capitals’ defenseman John Erskine on Friday night.

Philadelphia Flyers general manager Paul Holmgren announced on Sunday that Simmonds would be reevaluated on Monday. He apparently was seen speaking with his teammates around the locker room on Saturday, but concussion symptoms sometimes take a few days to manifest.

While the timetable for his return is unknown, Holmgren has not stated whether he plans on making any roster moves in the meantime. Tom Sestito returned to the line-up in his absence while rookie Tye McGinn moved up to the top line.

There is always the possibility that Holmgren could recall a Phantom in the event of another injury or if the team needs a scoring touch that can’t be provided from, say, Jody Shelley.

I just don’t think it will ever be Eric Wellwood again.

The Flyers under Holmgren’s tenure have had little patience for bubble players that don’t make an immediate impact on the roster.

Journeymen and eventual ‘AHLers’ like Ryan Potulny, Jared Ross, Jon Kalinski, and David Laliberte were each given opportunities with the Flyers, though they varied in length between 11 and 42 games.

Andreas Nodl is arguably the only forward in recent history that the organization allowed the time to develop in the NHL before eventually placing him on waivers in 2011. In 127 games with the Flyers, Nodl tallied just 28 points, but became valuable enough as a penalty-killing defensive forward that the Hurricanes decided to claim him off waivers.

Wellwood was given his first opportunity with the Flyers in 2010, where he earned an assist in three games played.

On January 21, 2012, I suggested in a post that the organization should give him another look at the NHL level while Jaromir Jagr’s groin went haywire.

He was called up three weeks later and tallied 5 goals and 9 points in 24 games over the remainder of the season. He also skated in each of the Flyers’ 11 play-off games, scoring no points while averaging 11:42 time on ice.

There was every reason to expect the Flyers to give him another look again this season, but an apparent lack of focus at the AHL level last fall may have soured the organization’s expectations.

Wellwood played in the first four games this season, but was returned to the Phantoms when Danny Briere was ready to return to the roster. He didn’t put up any points in that span, as the team earned a collective 1-3-0 record.

This isn’t an indictment of Wellwood. He is an unbelievably quick, defensive-minded forward with decent puck-handling skills. He simply hasn’t developed a scoring touch.

Eric T. of Broad Street Hockey also found that Wellwood was the best forward in each of those four games this season at generating offensive pressure and driving the play forward.

If the Flyers do make another call-up, I expect prospect Marcel Noebels to make his NHL debut. He took a demotion to the ECHL at the start of the season very well and has since scored 5 goals and 7 points in 12 games played with the Adirondack Phantoms in the AHL. He brings size and offensive skills that Wellwood doesn’t possess.

I could very well end up with egg on my face in short notice if Wellwood makes a reappearance on the roster. I simply suspect that the organization has seen all its had to see at this point, for better or for worse.

This Super Bowl Will Be Decided Late In The 4th Quarter