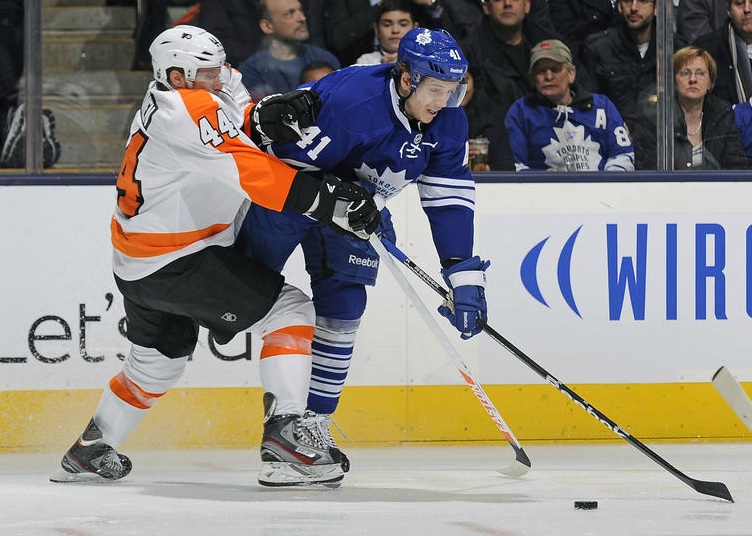 Philadelphia Flyers defenseman Kimmo Timonen took 13 shifts in the first period on Friday night, as the Flyers took on the New Jersey Devils at the Prudential Center.

He skated nine shifts in the second period before heading to the locker room. He never returned to the bench for the remainder of the game, as the Flyers eventually fell 4-3 in regulation to their Atlantic Division rivals.

The organization announced during the third period that he would not return, citing the ever popular “lower body injury.”

Over the course of his NHL career, Timonen has been the definition of an “Iron Man.” Over the last twelve seasons, he has missed just 33 games. Even when he was ailing last season with a disc fragment in his lower back, he only missed six games while averaging 22:45 of ice time per night.

It’s no secret that, at 37 years of age, his health isn’t as guaranteed as it once was. Timonen even suggested in early January that the condensed schedule could have more of an adverse effect on him than a typical 82-game season.

The immediate schedule does no favors either. The Flyers continue their road trip tomorrow in Montreal, followed by a matinee game on Monday against the New York Islanders (that is sure to be packed) and the Pittsburgh Penguins on Wednesday.

If the injury is that serious, the short-term solution is to call up defenseman Erik Gustafsson from the Adirondack Phantoms. The Flyers still have Andreas Lilja available, but a third pairing with him and Kurtis Foster is begging to be exposed by a fast offense.

Gustafsson has not had the year that I’m sure he and the organization were hoping for. He is the best puck moving defensive prospect in the system (considering only signed prospects), but his production with the Phantoms has once again matched his output last season, and not the All-Star totals he put up as a rookie in the 2010-11 season.

Some of that can be attributed to a leg injury that he only recently recuperated from. However, he struggled at the beginning of the season with defensive partner Marc-Andre Bourdon, who is all but shut down for the remainder of the year with lingering concussion issues.

The other immediate option would be to recall defenseman Danny Syvret.

The organization has given him lengthy looks at the NHL level in the past, but he was never quite able to stick with the club long-term. They have liked him enough to continue bringing him back, though, as they traded to bring him back in 2011 and then signed him to a two-year deal this offseason.

Syvret, 27, has been one of the leaders for the Phantoms on and off the ice. He leads all Phantoms defensemen in points with 24 and was outspoken about commitment to the team after another recent slide in the standings.

However this injury plays out, Holmgren has a lot of long thinking to do. Does he risk sacrificing the season or does he pull the trigger on a trade at the expense of team chemistry?

Everybody Has An Opinion About Chip Kelly’s Decisions

How Will The Eagles Defense Look In September?