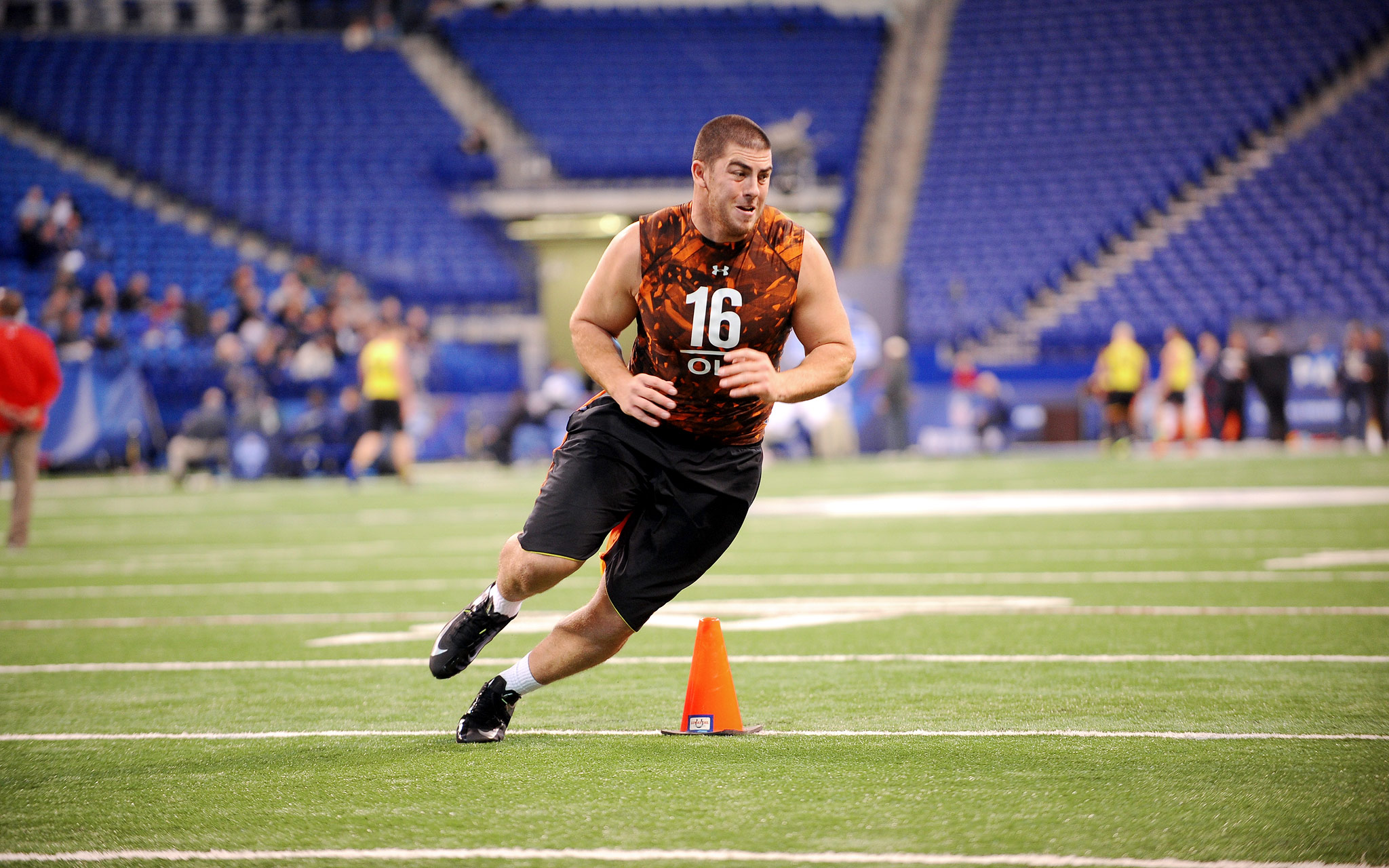 This year the offensive linemen are considered an outstanding group and expected to be very well represented in the top 10 picks.  They worked out yesterday and there are prospects who improved their standing and others who dropped a bit.

The number one rated offensive tackle Texas A&M’s Luke Joeckel’s was solid in his performance but at the NFL Combine yesterday.  He was slow in the 40-yard dash with a 5.22 and a 5.35, but the scouts don’t usually put too much weight on them.  His standing broad jump was 8’10” and he ran the 20-yard shuffle in 4.68. His field work was better but he didn’t outperform the other offensive tackles ranked below him.  He’ no longer head and shoulders above his competitors, but I think he still has a good chance of being the first pick in the draft.

Central Michigan’s Eric Fisher is considered the second best tackle in the draft behind Joeckel but he put up better numbers than the Texas Q&M tackle in just about every test.  He ran a 5.05 in his second 40-yard dash.  He had a standing broad jump of 9’8″ and did the 20-yard shuffle in 4.44 seconds, which was the best number of all the offensive linemen.  They both bench pressed 225 pounds 27 times.

Quite a few NFL player personnel people feel that Alabama guard Chance Warmack is best football player in this draft, but he struggled in the “Underwear Olympics”  yesterday.  The big fella could only run a 5.49 in the 40 yard dash.  His work in the drills done on the field was mediocre at best and had some onlookers questioning the glowing evaluations he had been given.

Jonathan Cooper is the second in guard rankings with most teams, but he moved closer to the top-rated Warmack yesterday with his workout.  He ran an impressive 5.07 in the forty-yard dash and moved well in the field drills.  He also showed off his tremendous strength by bench pressing 225 pounds 35 times.

Oklahoma offensive tackle Lane Johnson blew the roof off the Indianapolis Dome with his workout on Saturday.  He’s currently an offensive tackle, but he converted from being a tight end and his athleticism showed up big time yesterday.  He ran a(4.72 in the 40, jumped an amazing 34-inches in the vertical jump, leaped to 9-11 broad jump.  In the field work, he wowed the scouts even more by with his work in the kick-slide drill where he has to cut off an opposing pass rusher.

Oregon offensive tackle Kyle Long, who is the son of Hall of Famer, Howie Long, had a strong showing at this year’s Combine and showed that he’s a tremendous athlete with a big upside.  He ran a 4.93 40-yard dash which is outstanding.  His standing broad jump was 8’11” and his 20-yard in 4.63 seconds.

Arkansas Pine-Bluff’s Terron Armstead turned a lot of heads on Saturday with his 4.71 in the 40-yard dash.  This was a unbelievable time for an offensive tackle, but it shows that the big guys are getting faster and faster.  This guy is 306 pounds and was able to run a time which tight ends and linebackers would be very happy about.

Combines don’t mean a thing when you go back and watch tape Chane Warmack dominated stop letting the combine brain was you Gcobb!!!

With all due respect Big Turk, that was on the college level.

I think Chance Warmack is a good player, but I don’t think based on tape that he is a top 5 talent….top 10? ahh, maybe…..top 15? absolutely.

He is one that I believe is being overhyped a bit. You should NEVER draft a Guard in the top 5. I’m sorry he didn’t look that great at the combine, and there were some who looked a lot better than he did……truth is the proof

For some odd reason, Warmack reminds me of Max Jean-Gilies. I like Cooper better. IMHO, he’s more well rounded OG. Warmack is very good, but look at who his line-mates & TE where! No way you draft an OG, in the top 10. Sorry, not as important as OT & C.

Because they look alike DCar…..

Combine doesn’t mean a thing anyone can look good when they prepare for 3 months for a workout in shorts my brother example Darius Heyward Bay, Bruce Campbell, Mike Mamula. I will agree with you that a guard maybe too high to draft at pick no.4

Realistically he is a top 15 talent. That in itself is a complement; nothing to be ashamed of. But Mayock, and others are wrong for calling him a top 5 talent. He just isn’t. He just wouldn’t impact the game enough to be worthy of such accolade.

Exactly! Mayock has lost his marbles! Also, buyer beware, on the people thinking Lane Johnson, is a plug & play OT! BIG MISTAKE! Dude is a glorified TE, has ZERO lower body weight, & will be routinely bullrushed, in the NFL, unless he puts on, 20-25 lbs of muscle & lower body girth. Fisher, is not better than Joeckel. All hype from the Senior Bowl week. Watch career tape. Don’t get me wrong, both are plug & play OT’s, but Joeckel is a can’t miss. IMHO! 8D

We agree to disagree on Fisher, and Joeckel DCar…..

That’s the beauty of it, we can! But we wouldn’t turn down either. But unless we agree Peters is gone, in which I think he should be, we have bigger needs, with #4, which HAS TO BE a starter from day 1!

Not taking guard at 4. Brtter to trade down.

I agree Stevo. Just makes too much sense to do that.

Also looks like Alex Smith will be going to Kansas City as being reported.

Haha you said Mike Mamula..please don’t remind us of that guy. Just imagine how Jarvis Jones would look next to Mychal Kendricks and DeMeco Ryans. Would it be completely crazy if the Eagles selected Geno Smith at the 4 spot? I think he would do well in Kelly’s O

We’ll get our QB in next years draft, but Foles will still be the starter.

No let’s not! JJ has Spinal Stenosis, & is a major red flag. He’s 1 bad hit, from being a paraplegic. Everyone is cluelessly in love with dude! No way at 4, & a HELLS NO to Geno Smith at 4, with all the holes on this team!

Eagles need to shy away from DT Star Lotuleile has a heart issue,
Stay away from LB Jarvis Jones with Spinal Issue
And stay away from QB Geno Smith who is too passive to be a Leader at QB
So to me, this leaves OT’s Joeckel, or Fisher or DT Shariff Floyd
Who are tge only Prosoects worth taking at # 4
Maybe these Pkayers are not even Pro-Bowlers 2-3 Years down the road, but they are upgrades over current Zoroaster and should be good to very good Players for the next 8-10 Seasons barring injury

and stay away from guys like Bernard Williams who want to play BBall and smoke chronic
and stay away form guys like Sean Andrews who want to rap in their basement about skinny white swimmer guys
these are the injury guys so far Jordon, Milliner, Jones, now Lotulelle
I’m with you paulman Joeckel, Fisher, Floyd because no injuries right now

The one I have noticed about Alabama’s Players during the Nick Saban era,
They tend to physically max out and don’t improve much as Pro’s as they are already in a Pro System in Alabana as far as weight/physical conditioning Nd it seems in recent years by the Players start getting injures and just beat down after a couple years in the Pro’s.. Can anyone from Alabama the last Drafts or so that has shined in the NFL (outside of WR Julio Jones)

the last 3 years in recruiting
Alabama is getting who ever they want in the Country
Blue Chip Guys coming in – leaving as first round picks
Can’t ignore that going forward
But I want an OT ( no more Bell, Dunlap, Kelly) and I believe at least one or all won’t return healthy ( Kelce, Herremans, and/or Peters )

I said last off season that Trent Richardson wouldn’t be all that, and even despite his injuries, …..to me showed himself to be the average player I said he would be. I know he scored some TD’s, but a lot of them were short yardage, goal line scores. He didn’t have a ton of break away runs like some of the elite RB’s, because on the NFL Level, he is just OK, average.

You may be on to something there Paul, but you will find some critics because some will be so enamored with that team, as much as they are with the player, that they won’t be able to see the point, that they may not be all that in the pros. “Are you kidding me, They were great in college”. They just won’t get it.

We agreed, overhyped! Last years RB draft class, & this years, are near carbon copies. No studs, or stand-outs.

trent is a good player – Cleveland had no QB, No wr, aveage OL and God Help us going forward HC in pat shumer
still don’t understand why they needed to give Minnesota a pick to move one spot ahead — Heckertt was exposed and taken advantage of by Minnesota on that deal
Would Cleveland offer Richardson, Weeden, Mitchell Schwartz and this years #1 for RG3 —- boy they blow that opportunity

Trent, is not good. He’s got conditioning & health issues, & was overhyped & overrated!

Doug Martin was the best RB, in last years draft, and his production PROVED that…..

I saw more potential from Bryce Brown, drafted in the 7th Round, than I did from Richardson.

I honestly feel that Trent Richardson is a good player, but players like him are a dime a dozen in the NFL. He’s REALLY NOTHING SPECIAL. I said that months before Jim Brown said the same thing.

Best overall Running Back is Stephan Taylor from Stanford because he can Pass Protect, Catch and Run.. He will make a nice situational/3rd Down back for someone and will probably go in the 3rd Round.. Rush for 400-500 Yards, Receive for another 500-600 Yards

Don’t confuse Richardson with Ingram. Martin was good but Richardson is better watch his tape from last year. If they get better QB play he’ll be that much better also remember he probably at no point was 100% either.

in Today’s NFL, a RB needs to be able to Catch the Ball and Pass Protect.. (not sure this is Trent Richardson’s strength’s) but their COach (Chudzinski & OC Norv Turner) are very creative in getting their backs into the passing game.. Expect a big season by Trent Richardson and the Browns Offense this year..

Well in that case trade down. And i agree with you guys regarding the health issues with some of these guys. They should stock pile picks for now

Problem is unless a Team that really wants QBGeno Smith or OT Fisher, who else is there that is worth moving/trading additional Picks to the Eagles to go the the 4th Spot.. I say Eagles select OT Eric Fisher at #4 and then
Move on for some moves in the 2nd/3rd & 4th Rounds

And that pick should be Fisher……