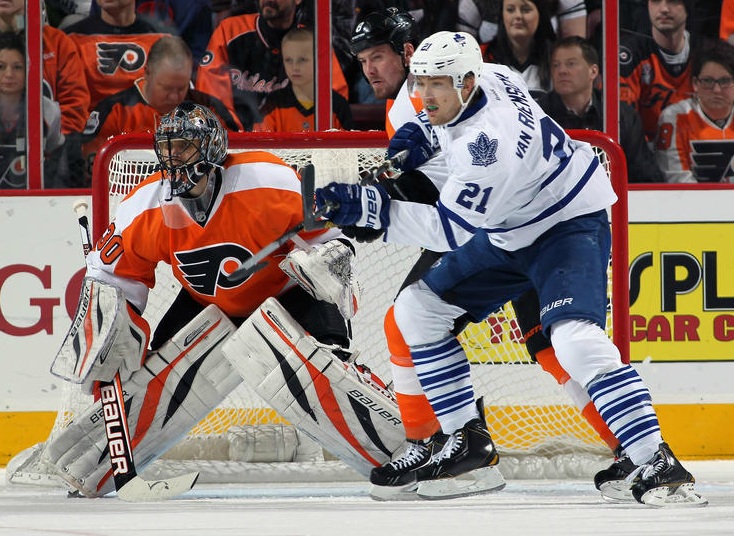 The Philadelphia Flyers had another chance of breaking even in the standings if they could grind out a win against the Toronto Maple Leafs this evening, but a handful of mistakes in a tightly contested 4-2 loss cost them another valuable two points as the 2013 NHL season draws closer to the halfway mark.

The Flyers opened the game with the third line of Max Talbot, Sean Couturier and Zac Rinaldo. Rinaldo’s promotion to the checking line has garnered a lot of positive attention for the agitator, as he has been able to better translate his relentless forechecking into being more than a liability.

Rinaldo stayed glued to former Flyer James van Riemsdyk throughout the game, holding him to just one shot on goal in spite of his 20:49 of ice time. Rinaldo also drew a powerplay opportunity against Leafs fourth liner Mike Brown in the first period.

The Flyers controlled much of the puck possession early on, out-shooting the Leafs 8-4, but a failure to set up the powerplay on the Brown penalty eventually led to the gameplay evening out.

Phil Kessel opened the scoring late in the first period, racing past Kimmo Timonen before beating Ilya Bryzgalov cleanly from the side of the net. Bryzgalov could have made the stop if he hadn’t played too deep in net and cut down the angle, but I don’t think he expected the play to develop as quickly as it did.

While the hockey sense and experience that Timonen brings to the team are invaluable, this was probably the worst his age been exposed all season. He was also called for a blatant tripping penalty midway through the second period after hustling back to negate a 2-on-1.

The powerplay continued to stumble through the second period, as the Flyers were only able to muster one shot on goal through four attempts.

“They were really aggressive, and I think we got frustrated a little bit through the middle period,” said head coach Peter Laviolette. “There’s no time to set up and make the nice plays that everybody wants to see. I don’t think that it’s not the powerplay wasn’t working, or that they didn’t want to make things happen… When the checking is tighter, there’s less… ‘WOW’ out there, and that’s the way of the middle of the game looked.”

Nikolai Kulemin padded the lead at the 15:02 mark, taking advantage of a bad line change and beating Bryzgalov on the 1-on-1 rush.

The Flyers’ top line responded two minutes later, as Jake Voracek fed a beautiful cross-ice pass to Scott Hartnell while he crashed the net. Hartnell raised the puck over Leafs netminder Ben Scrivens, scoring his first goal of the season.

Voracek was named the NHL’s first star of the week after scoring 11 points in his last four games, and he is already making the case to be considered this week as well. He scored a critical powerplay goal early in a 4:00 minor aginst JVR to help cut the Flyers’ deficit to one goal.

In spite of stronger play in the final ten minutes as the sense of urgency kicked in, the Flyers were unable to crawl out of the hole that the early mistakes put them in.

As Laviolette remarked in his post-game presser, the team wasn’t that bad defensively. Both teams played strong checking games and limited the amount of shots on net. It was simply a handful of mental errors that led to scoring chances for the Leafs that they were able to capitalize on.

“There’s been a lot of talk about the ‘0.500.’ It’s not like we’re shooting for 0.500 in the room,” said Laviolette, when asked about the importance of hitting that mark in the standings.

“We’ve just got to get back, and it’s got to happen through this stretch of games, where the home games favor us and [there are] not as many road games. It’s got to get to a point where we put together 3 out of 4, 5 out of 6, 6 out of 7 and start to get the win column going in the right direction so we can set ourselves up for the last third of the year and a playoff push. We’ve got to get back to it Wednesday night and start climbing back out.”