The Geno Smith Fever Will Help Andy Reid And The Chiefs 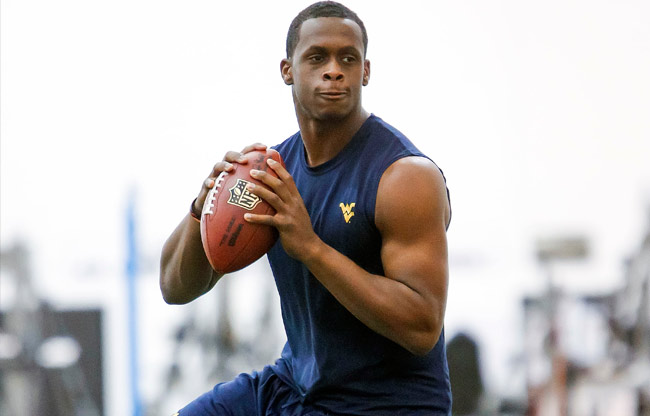 I know Eagles fans don’t want to hear this, but it’s starting to look like West Virginia quarterback Geno Smith is going to get Andy Reid and the Kansas City Chiefs additional draft picks in this year’s selection process.  Mike Florio of ProFootballTalk.com has already predicted that Geno Smith will go number one and the Chiefs will get a lot for trading down.

A bevy of draft experts are starting to project him as a top five pick rather than being a top ten choice.  His NFL Combine workout and his Pro Day workout along with the desperation of so many teams to find a “franchise quarterback” have probably set the wheels in motion to move him up to the top of the draft.

I think it will work out for the Chiefs as if they got San Francisco quarterback Alex Smith for nothing because they’re going to get some nice offers from teams who want to move up and get Geno Smith in the first slot.  Reid and the Chiefs will get back just as much for letting a team move up and draft Geno as they gave up to the 49ers for acquiring Alex Smith.

Let me make it clear that I’m not vouching for Geno Smith because I don’t know enough about him.  I do love the way he throws the football and I’ve seen him show his speed when taking off on scrambles.  Still I don’t know if he’s a sure thing, but it won’t matter to the teams who want to move up and get the top quarterback in the draft.

Jaworski On Geno’s Pro Day: “His stock to me clearly went up today”

I think the Eagles are in just a better position as the Chiefs, Reid is going for Jockel or Fisher after getting rid of Winston and he knows both those guys will be gone by 5.

KC Chiefs goes 15-1 and Wins the Super Bowl 35-32 over the Eagles…
QB Geno SmMith and WR Mardy Gilyard are Co-MVP’s fpr the Super Bowl and unfortuntately, both Break their Collarbones while attempting to carry Andy Reid off the Field on their Shoulders … Neither Player is heard from again..

Drive up his price for extra draft picks and move down and pick a few guys.

If Smith is there we should definitely select him.

There is little doubt the eagles will select geno smith at 4,and if they believe he may go earlier, they will trade up to get him, its the eagles modus operandi, they love the mobile , black qb, but this one a big mistake

I disagree jakedog.. We need vick and smith. It can be perfect with Chip kellys offense.. This is what we have to go with so might as well make it as best as possible.

You just used the words ‘Vick’ and ‘perfect’ in the same sentence.

And not as a joke.

Delusional. Too many Guinness today?

We all know you hate vick Vinnie but the man might not be a great football player but he turned his life around. We need to see how he runs this style offense and we need to draft smith to do the same.. Like it or not this is the offense we will be running. I don’t have any favoritism one way or the other.

If they do pick Geno at 4 then he should start from day 1. Vick should be released minutes after the pick (since nobody in the league would trade a bag of shit for him). It would just be a waste of time, you would need to figure out if Geno can play in the NFL before the next years draft and you need at least a season to actually do that. And if you are picked at 4 overall, you are suppose to be a NFL starter from day 1, you should be that good that you can step in. And its not like Geno could learn from Vick since Vick is a below average QB anyways. Hell Vick won’t even know the system himself.

However, I do think it would be a mistake to draft Geno at 4. I think he could possible be a good NFL player but no way in hell do I waste the 4th pick overall on a player that got shut down by freaking syracuse defense in the biggest game of the year with weeks to prepare. Picking Geno that high would be like taking Locker or Ponder. Guys that were rated mid to late 1st round at best but just because they had a good day in shorts and no defense they rise up the board and all of a sudden people are on the bandwagon.

ANd that WVU system is suspect when it comes to the NFL. Name me the last NFL impact offensive player that came out of WVU? They had a bunch of guys tear it up in college but it never really translated to the pros.

Dana Holgorson was just Hired at West Virginia last season, no offensive players were drafted from West Virgina last year so this is the first year Holgorson system players will be drafted.

good stuff but a QB translating to the NFL is a whole different story. I just think it will be a mistake at 4 overall.
Fact is most college players can light up teams like Marshall and James Madison. But the guy folded against quality competition for the most part. Sorry thats the last thing we need in Philly. Not showing up against good teams and big moments is not a quality I look for in a QB or a player at 4 overall.

If Geno played in the SEC against those Defenses, he would probably be rated as a 3-4th round prospect right now.