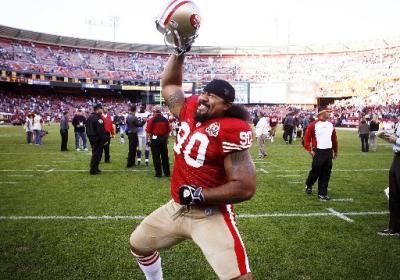 Back in that infamous offseason of 2011 when Nnamdi Asomugha, Dominique Rodgers-Cromartie, Vince Young and Jason Babin stole the headlines, there was a problem that no one noticed right away.

It wasn’t until in hindsight, that among those four guys, there was a 25-39 record amassed between the Oakland Raiders (Asomugha), Arizona Cardinals (Rodgers-Cromartie), Tennessee Titans (Young) and Houston Texans (Babin). It was often discussed how some of these guys gave up on their team last season; perhaps it’s because they’re used to playing for teams who are done playing meaningful football by December.

Winning was something these guys weren’t accustomed to, and in their two seasons in Philadelphia – one in Young’s case – winning remained foreign territory for them.

This time around, though, the new Eagles’ regime is doing their homework. So far, the Eagles have netted a handful of players in free agency, none of whom being a superstar. What Philadelphia has done so far is bring in men who are coming fresh off of winning seasons.

Between their signings so far, they have brought in a combined free agency class that boasts a 68-42-1 record. The only men who were on teams below .500 were linebacker Jason Phillips (Panthers) and Bradley Fletcher (St. Louis); both of them are more likely special teams players, too.

Digging deeper into the signings so far, four were on division winners in the AFC (Barwin and Casey with Houston, Chung with New England and Williams with Baltimore). Of course, Cary Williams is coming straight to Philadelphia with a Super Bowl ring, as well.

Issac Sopoaga was also a division winner with the San Francisco 49ers and an NFC Champion, too.

This is exactly the direction the Eagles needed to go in. We’ve seen what happens when bringing in a class of Pro Bowlers and superstars. Perhaps that was just a fluke class, but nonetheless, Chip Kelly, Howie Roseman and the rest of the Eagles’ staff are doing a fine job in free agency.

It seems pretty clear that they want hard-nosed, chip-on-their-shoulder type players who want to win. Philadelphia fans, despite some of the previous questionable moves surrounding the quarterback position, should appreciate that and look forward to these new players competing the entire 60 minutes every game.

The Geno Smith Fever Will Help Andy Reid And The Chiefs

Bradley isnt special teams he is a starter type CB

He more than likely will start alongside Cary Williams. But I do think they aren’t done at the corner position. Wouldn’t be surprised if they signed another veteran and/or drafted someone on the first day.

Pip…. not so sure about that. 1 thing that i do like about what they have done is that guys will compete. Noone outside of Cox, shady, Djax, peters, herm, cole (assuming he’s here), is promised anything.

Great article Kyle; spot on. I feel like we have guys hungry to play and not guys who just want to receive a paycheck and keep their uniforms clean.

Stevo, I kind of feel like Trent Cole is not guaranteed a starting spot right now.

the Eagles were Weaklings last year and quitters so the new FA additions are welcomed more because they aren’t the former. But the Eagles need some superstars – Touchdown makers and turnover causers

I say we got the better slightly better part of the trade one because DRC played well on occassions (very few games) and we got a draft pick also. Kolb showed flashes so i said no one really got the True Better overall deal in this one. its pretty much 51-49 Eagles.

Wasn’ the trade McNabb for a 2nd rounder (Nate Allen) and a fourth rounder which later netted us Demeco Ryans and Casey Matthews? I’d say we easily got the better end of this trade. However, it could get tricky if you look at the fact that McNabb was later traded by the Redskins for a 6th rounder to Minnesota which got them Alfred Morris. But at some point, you have to draw the line because any of these players could be traded for other draft picks or players.

I’d say the Kolb-DRC trade was easily in our favor since DRC did play well at times and we also turned that 2nd round pick into Brandon Boykin and Vinny Curry. Kolb was cut and they have nothing to show for it.

Jon its not my style to call people out on the internet but you are a freaking idiot. Do you watch any other team besides the Eagles? A. Benn is a BUM he sucks. He has no bussiness playing in the NFL.

Total waste of a 6th round pick.

Arrelious Benn is a speedster. Runs a 4.42 and is young, (Eagles still on the youth movement) only 24 years of age. Has alot of potential. Very very good trade

The people of tb are laughing out loud.

You ll see. He will fit in very well in this offense. He has talent

Why would a team give up on a 24 year old 2nd rounder if he could play?

Due to the fact that he has been up and down, battled injuries. This could be just what he needs, a change of scenery, with a coach that will cater his offensive approach to the strengths of his players. Chip has a good football mind for defense, but a great offensive mind. He ll utilize Benn the best way possible. Very good pick up.

Haveacigar. I bet he doesn’t even make the team. No way he beats out Riley Cooper. Cooper is way better on special teams.

HEEEEEEERE’S JONNNNNNY!!!!! The clueless, @$$CLOWN cheerleader, is back! Hey, LIL BRON-BRON, how did you make parole? I thought that restraining order, that you broke on Lebron, put you away longer?!?

Eagles did same thing with Safet Jarrett last Year and will
Do it this with Nate Allen.. Some Players are just not a good fit
With a particular Team/Scheme..

Now my next pick up would be the LB Ray Maualuga who would play as ILB here in the 3-4. The Birds need one more ILB and then theyll be set there.

Elvis Dumervil is released. Eagles should look into that. He would easily be the best player they have on defense. Major impact player. Best season he had when he was a OLB.

ES, I was thinking the same, when I saw his release. I’d sign him, & trade both Cole & Graham. You then would have a great LB corps, of
Dumervil- Kendricks- Ryans- Barwin. Draft another ILB & OLB, in the draft. Would be nice!

Same thoughts I shared on here, good stuff Big. Benn will in all probability takeover that 3rd wr spot. Avant is getting old, and is very slow. May be on the team for veteran leadership,blocking ability, has good hands, but is slow as molasses haha.. this offense will require speed speed and more speed. Benn has that.

According to a source, the Eagles have no interest in Elvis Dumervil at this time. But I was told that they have been in discussions with OT Jake Long all while he visited the Rams and the discussions are ongoing. The Eagles are “very interested” im being told.

We are all dumber from listening to Jon Hart speak. Than you

It would be nice if the Eagles signed Jake Long, but I’m sure it will be a costly signing. I think he’s gonna sign with the Rams. The player i do like is RT Sebastian Vollmer from the Pats. Solid player and is only 28. He did have knee surgery in Feb and should be good to go by training camp. I have heard that the Eagles are looking Vollmer, and RT Andre Smith from the Bengals. I bet the Eagles sign one of the three available. Preferrably Vollmer

Yeah Jake Long is the guy, they’ve been eyeing him since the start of Free Agency. Have been in constant contact with his agent. And as we go further this is a situation we should watch because Long obviously hasn’t been able to get the money from teams that he wants, so hes gonna be forced to come down in price and I believe that’s whats taking place at this time. I have a feeling the Eagles will eventually sign him for much less than he originally wanted..

I like Jake long, a winner who played for a losing organization like the Dolphins, all that losing with no end in sight can affect a players MOJO, a fresh start for Jake , here @ RT would be good

Doesn’t Long have some health issues? I figured the Eagles would stay away from someone like that. But ya if they can get him at a good price I’d say go for it. But i really like Vollmer.

DMAN, don’t question the awesome Jon, he was told by his inside sources! MY GOODNESS, GRACIOUS!!!!

Stay away from OT Long
Back, Neck and Shoulder issues and has been on the Decline the last 2 Seasons, his body is breaking down, he’s still a good Player but not a Pro-Bowler Type at his stage of his Career.. I would be concerned with his back
And Stay away, Sign Eric Winston or Draft on of the Top Tackles at #4 (Joeckel/Fisher/Lane Johnson) and you have. Younger, Cheaper OT during their Rookie Deal than you get with Long, Stay away..

Paulman. remember Ron Solt — some of these players games may shrink like prunes if HGH testing is implemented.

I remember old # 69 of the Colts, Ron Solt was a good player in his day..
Word on Long is that he may just remain with the Dolphins since they added
Weapons like WR Mike Wallace, Beandon Gibson, TE Keller
And is being wooed back by the Dolphins and is mulling over their original Offer.. Rams were concerned as most are about his issues with his back which is why there hasn’t been Teams knocking the doors down to obtain him and with a Strong OT Class this Draft, the demand and Salary Offers
For OT are down across the board this Free-Agency

I agree Paulman. And yes Eric Winston would be nice too. Seems like a player with a lot of heart and stands up for his teamates. But players like Long, Smith and Vollmer will have to sign first in order to tell what it would cost for someone like Winston.

Just to change the subject – BTW, JUST AN UPDATE ON SOME OF THESE SO CALLED FUTURE NBA SUPERSTARS ;

Thomas Robinson – Traded to the Houston Rockets, in the middle of his rookie year for virtual NBA Garbage….I told you he was nothing special, and would be a bust….

Jared Sullinger – Out for the season, with the same back issues I said would come into play with an NBA Schedule, and was only averaging 6 points, and 5 rebounds during the regular season. Hardly Superstar numbers, He wasa semi beast in college. that doesn’t;t always translate to the pros…..I told you he would be a bust, and somebody owes me a case of Kirin Ichiban!!

Dion Waiters – Nothing close to superstar status, and never will be. I told you he would be a bust…..

Tyler Zeller, Myers Leonard, and John Henson, all hyped by some of you, and all BUST!!!!

My name is GMCliff – recognize