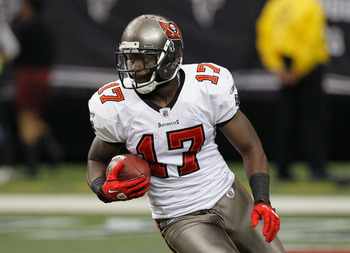 The Eagles kept the offseason moves coming on Friday afternoon, completing a trade with Tampa Bay that will send wide receiver Arrelious Benn and a seventh round pick to Philadelphia in exchange for the Eagles’ sixth round pick in the year’s draft and a conditional pick next year.

Benn is a disappointing former second-round pick of the Bucs. He’s a big receiver at 6’2 and 220 lbs, but he was unable to accomplish much in his brief career. His best season came in 2011 when he caught 30 passes for 441 yards and three touchdowns. His inability to emerge was part of what prompted Tampa Bay to go out and spend top dollar to acquire Vincent Jackson.

Benn will get a fresh start in Philadelphia, but he’ll need to earn his way onto the roster.

Very good pick up. Has some ST ability, has size, strength and can end up as the Birds 3rd WR. A young guy that has the chance to really take off here in Philly with this change of scenery. I really like this trade. Howard Roseman did it again. Nice work…

Howie hasn’t proved a damn thing yet, many fans are not sold on Howie… most sucessful personel directors have sat under and studied under a proven guy ( like Tommy Gamble has ) WHO DID HOWIE SIT & STUDY UNDER ? and don’t give me Andy… as Andy has never drafted anybody in his life before he got here, so with that , people have a right to be concerned. let tommy gamble identity players for Chip and run the draft, let Howie sign them & manage the cap and we’ll all be better off

Aurelius Benn has no Soecial Teams experience as far as I know JH
He’s been a WRvand never received a Punt or KO, so where is his ST experience come from??? I don’t recall him playing ST at University of Illinois either.. He’s a WR

Arrelious Benn is the WR version of Nnmandi Asomugha.

That is seriously the worst comparison ever.

Maybe Chip can make something of him.

Not a bad move, nor a great one. One thing he mite do for the birds is return kicks. Averaged 23.5 yards per return last year in Tampa. Could be lights out for Avant?

This isn’t the front office. Lets get this correct. No player comes here unless Chip Kelly wants them here. Every player brought in has to be ok with Chip. Do you really think Roseman or Gamble just pull players out their ass and bring them here? Doesn’t work like that. Chip Kelly probably recruited this kid and knew of him very well and told Howie to see what he can do. Kelly has a role already set for him. Now if it works is another issue.

dag – I was taken a shot at Howie and his cliches. This whole week he has been spewing that the Eagles are bringing in professional high character players doing extensive background checks and interviews with fellow coaches. Well nobody in College or Tampa will give Arrelious Benn a character recommendation. That is what I was laughing about.

Additionally Jeff Lurie cleaned and erased Howie Roseman for all responsibility at the state of the Eagles January speech except the 2012 draft. Howie has his fingers in every contract on the roster now except 5. There are only 5 contracts that were signed before 2012 that have guarantee money that can not be cleaned off of Jeffery’s January 2013 Howie free speech. He isn’t back stabbing and fooling anyone anymore. This team is his Howie’s contracts.

My next move would be sign Elvis Dumervil or Ray Maualuga. Both very good LBs. Dumervils rushing ability off the edge is one of the best in the league. Birds need to take a hard look at him and I believe they are..

Ray Maulauga had the hardest hit vs that UCLA QB on the sideline that I ever saw in college football. I thought he killed him.

Maualuga is slow, and horrendous in coverage; Not a 3-4 linebacker.

The next move should be to sign Sebastian Vollmer to cover the RT Position, and Andre Smith to strengthen the RG Position. I know he is a tackle, but he would be better utilized playing Guard.

Then turn our attention to the draft.

Dag you have no clue about what you speak , Kelly is a stooge to the money boys who lured him away from a position in college he coveted, andy Reid laughing his ass off, no longer under the direction of money men, jock sniffers, Andy finally free to do his own thing, Kelly will prove to be a failure because he’s a puppet to money people, who love money, power among all else, and chip the mole Kelly is a weak ass man to the money people

Andy finally free to do his own thing? Did you just start following the eagles recently? Andy had TOO MUCH power in Philly which is ultimately how the Eagles ended up in the position we’re in now; 4-12, rebuilding, and no franchise QB.

looks like Andy is doing exactly what was goin on Philly but in kc to me. good luck with Alex smith chucking it 40 times a game

Andy Reid response to an interview question askin him why he isn’t handing the ball of to Charles more than 14 times again.

well we had a couple pass plays designed for him but they were just like runs so I count that as a run.

Jake takes it in the can. You got it all figured out. Some of you dudes are the biggest hand jobs I never met. Cheer for another team.

When you are around long enough you figure it out, you can root for this franchise, it will never produce a championship until it is rid of the agenda , money grabbers who have no interest in sports except for profit, there’s no other explanation for the hire of a nerd, bean counter like Roseman, this guy couldn’t make a pop Warner team, but he’s an nfl gm, only in the the old of capitalism and the types of Roseman , Lurie who thrive in this money environment,

Sounds like you take it in the can clueless, no original thought, no dominance, no man must be a faggot like kelly

You are ignorant too btc, read up, listen up, Andy had no power, never wanted Vick, I doubt he wanted mcnabb, same stuff going on now

Andy had no power? Haha. Jake clearly either isn’t really an Eagles fan or just started loosely following them within the last year or so.

Eagle Suck…. You Suck get lost…

To true fans. es the front office is concerned with their bottom line and finances and thank god they are and make money or the team would have done what other losing teams do LEAVE for greener pastures.

It is their desire to make money that makes them compete. You can not tell me that Lurie and Co do not care about all the money to be made selling Superbowl Merchandise to a starved base that will buy Salt and Pepper shakers and Caps and……. Winning more = More money. Look at the Cowboys who have seriously disturbed hordes of fans outside of Dallas due to WINNING multiple SB ==> see also steelers nation, Patriots blah bl;ah blah.

Regal eagle tbe reason the birds are what they are

Birds should have thrown in Riley Cooper’s bum ass.

Cooper is a decent player. He is not an NFL starter but he is a solid back up / ST guy.

You can not have 53 stars on the roster.

True, but you can’t have 40 Special Teamers on your Roster
either

Jake the reason the eagles are where they are is that Lurie should have moved on from Andy after 10 years. If you can not produce a championship after 5 you should be gone but certainly after 10. We got a team full of guys that should /would have been cut but for a coaches blind loyalty to his guys. Guys were allowed to stay far too long and an atmosphere of not having to earn your roster spot took over thus we got hot Garbage in our living rooms.

WR Aurelius Benn had a promising Start to his NFL Career with Bucs
But was one of the many players along with then Bucs Coach Raheem Morris
Who were young, immature and lacked focus and discipline (Winslow Jr, Talib,Freeman) a couple years back and fell out of favor with new HC Schiano
A change of scenery may do him well with a fresh start with the Eagkes
Benn from University of Illinois was a Top 5 WR when he came out of College
Low risk-high reward with this signing for this is probably his last chance to remain in the NFL as a Player. He has size, speed and can make plays down the field, so hopefully he’s matured and realizes that he has to give 100%
On every practice and play and if so, eagles. Kyle have picked up a quality
4th WR who can contribute..

If I had a choice I would have wanted the Eagles to use Free Agency for Defense and the Draft for Offense — So Howie and the boys seem to be making favorable choices so far. I would have targeted Andy Levitre instead of James Casey with that money spent of Offense though. LT, SS, C, RG, QB were the biggest holes on the team last year. They made a lot of moves but 4 of their 5 biggest problems are still there. Their offense couldn’t score last season so I am hoping they use the draft to fill all these offensive weaknesses now.