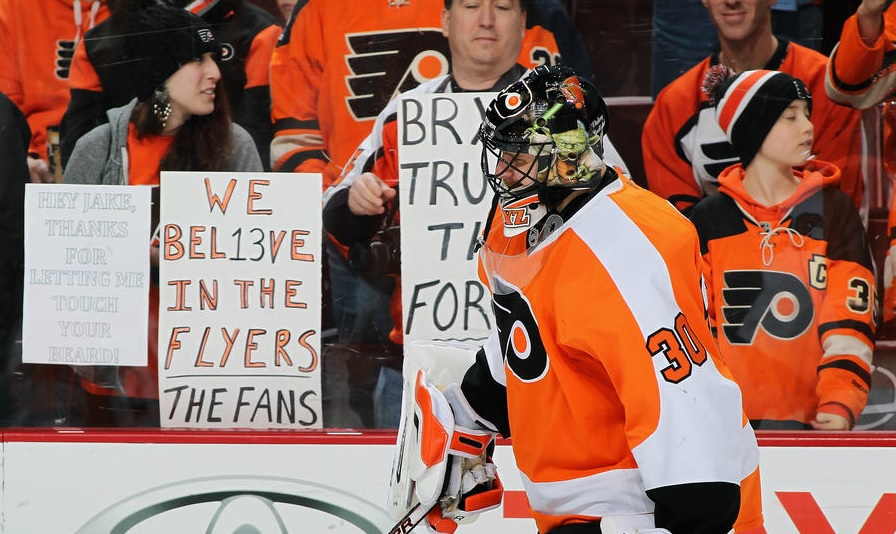 If the Philadelphia Flyers’ 5-2 loss to the New Jersey Devils on Wednesday was “rock bottom,” their 2-1 shootout victory on home ice was a positive step in the right direction.

Not “perfect,” but it will do.

Goaltender Ilya Bryzgalov, once again being brought into the “buyout” conversation, provided ammunition to shut down his critics by stopping 27 of 28 shots through overtime and two of three shootout attempts. There were some close calls, including one shot in the third period that literally trickled just wide of the goal post, but he was solid when the team needed him to be.

Moving up through the roster, the defense made far less turnovers than they have in recent games. Luke Schenn somewhat screened Bryzgalov on the lone Devils’ goal, but the puck was redirected by Devils’ forward David Clarkson through his legs.

Schenn finished the game with one blocked shot and nine hits in 22:37 of ice time.

The offense left a lot to be desired, especially when the team has not had much success winning games when they enter the third period tied. The majority of the game was “dump-and-chase,” with the Flyers generating little sustained offensive pressure against the Devils. With just three shots on goal through the third period, they were lucky the score was already tied.

Max Talbot put the Flyers on the board in the first period, thanks to a great line rush between himself, Matt Read and Simon Gagne. Gagne patiently held the puck on his stick as NJ defenders slid in front of the crease to block a shot, passing it to Talbot with great timing for the back door goal on an open net.

In addition to concerns about the team’s approach to offense, the reckless plays by Scott Hartnell and Brayden Schenn nearly cost the team the win.

Hartnell, as one of the veteran leaders of the team, needs to take a lesson from Zac Rinaldo and focus his energy when he’s on the ice. Hartnell’s aggression following a penalty to Jake Voracek while on a powerplay prompted Wayne Simmonds to join in, turning a 5-on-4  powerplay very quickly into a 5-on-3 shorthanded situation. The Flyers’ penalty kill was fantastic in shutting that near-catastrophe down.

Hartnell was called again in the third period after making a needless slash, with the slash being the final call on a shift just begging for a trip to the penalty box.

As for Schenn, I would be shocked if he isn’t suspended again. With just 1:42 remaining in regulation, Schenn charged Devils defenseman Peter Harrold in the offensive zone, throwing a dangerous hit while leaping into the air. It was the exact same hit he was suspended for earlier this season, against the same team. It was a stupid, unnecessary play that he should know better than to make.

The two points earned are valuable, but it’s a drop in the bucket.  The team has to start pulling win streaks together if there is going to be a fairy tale end to this season.

Bryz was good last night. Would be nice for him to get a string of about 10 of those in a row.

I don’t believe my eyes last night Bryz won a shoot out. Congrats! Clarkson lost control of the puck on his shoot out attempt & Elias missed the net. Read and Giroux went five hole.
Adam Larsson moves away from the puck and cringes and gets a boarding call. LOL I was laughing. He was so scared of the impending Rinaldo hit and then the refs bailed the chicken out with a horrible boarding call. Flyers announcers missed the entertainment in the hit. They are so motioning the hit and trying to examine Rinaldo’s intent when they should have been examining Larsson chickening out.
Please send Couturier to the AHL he is so boring. Bring back Harry Z instead he at least gives 100% effort instead of coasting through the game emotionless.