Leadership Will Be Key To Locker Room Changes For Eagles 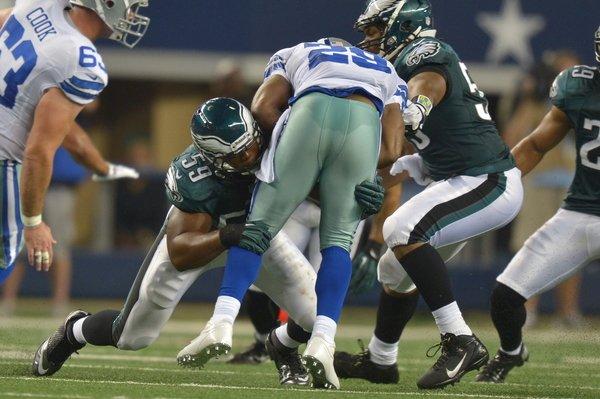 I commend Eagles new head coach Chip Kelly for putting his stamp on the team and one of the places he has started is in the locker room.  No longer will the Eagles team be separated by positions and offense and defense in the locker room.

This year, the offensive players will have lockers right next to defensive players.  Everyone will be mixed in together, but they will make it a point to have older players mixed in throughout the locker room with younger players.

This is good, but it won’t mean anything if the veteran players like DeMeco Ryans, Jason Peters, Todd Herremans and Jason Kelce don’t take control and lead the football team.   On the offensive line last year, they had no leadership when Peters, Herremans and Kelce went down.

The veteran players who were left a year ago on the team failed to step  up and lead with some “tough love”.  They all followed Andy Reid’s lead and refused to call anybody out.

I was disappointed in that Ryans wasn’t comfortable to challenge his teammates on the defensive side to be more prepared and focused during games.  I know it was his first year with the team, but he was the best defensive player with leadership ability.  I respect the fact that Ryans carries himself like a professional.  He is mentally prepared for each game and was their most consistent defensive player a year ago.

He stayed quiet as the defense melted down week after week, especially in the secondary.  He never criticized his teammates publicly.  This should have been done at some point.  It should have started by getting in the face in one-on-ones, then eventually been made public when the private talks failed to work.

Understand I’m not talking about individually calling them out publicly, but he and the teams other leaders should have been making it known that there were veterans taking the field, who were unprepared to play.  People like Nmandi Asomugha and Dominique Rodgers-Cromartie should have been made uncomfortable and told that they were letting their teammates down.

The Eagles need leaders to step up this year and rule this team.  Sitting next to a veteran player in the locker room won’t mean anything if those vets don’t teach and lead.  Ryans must be one of leaders because of the fact he’s always going to be talking in the Eagles defensive huddle.  With that position comes a leadership requirement.

Peters, Herremans and Kelce are also guys who must step up as leaders.  I know they were were hurt a year ago, but the team needs them back desperately as they head forward.  The fact that they’re not all the way back to being ready to get on the field and play, makes me think the Birds will take one of those tackles with their first pick.

On another very important subject, both of these guys are still in the process of getting healthy.

I head that Peters is ready to go because he’s had a lot more time than the others to rehab his Achilles tendon tears.

Kelce is the one farthest away.  He’s recovering from serious knee surgery and won’t be able to do much in the upcoming mini-camp.  It looks like he’ll be back and ready to go when the summer workouts get started.  He’s a key to that offensive line.

Herremans, who is recovering from foot and ankle surgery will likely participate in the upcoming workouts, but it will be the start of him doing football drills.  It will take him awhile before he gets all of his movement back, but he’ll probably be much improved when they do their second group of team workouts after the draft.

Coburn, Meszaros Out Rest of the Season as Lauridsen Recalled

Paulman this is the exact reason why I feel Dion Jordan will be the pick. Bringing in someone who is Chips “guy”. Someone who will be a voice of reassurance that Chip knows what hes doing when bad times arise. Someone that has actually flourished under Chip. Plus after doing more and more research at 6 7 with and already reportedly up to 250 lbs his skill level is just off the chart. This is my choice today lol.

I hope the on the field demeanor improves.
Herremans used to run across the field to help his RB get up off the ground, he didn’t have that passion last year. Dawkins would sprint to huddle and encourage and/or talk strategy.

We need line help desperately. Eric Fisher is my choice at the moment

What leadership? 90% of the team will be changed, the majority will be young! Ryans is the only leader they have.

He tore his ACL, hasn’t played since the 2011 opener, & Weaselman signed him to a 3 year contract. O.o
BWAHAHAHAHAHAHA!!!! Still no O-linemen! Cue the Circus theme song!

The writing is on the wall, they WILL take an O-Linemen with the 4th pick! Herrimens will move back to guard an the line will be set, I also see them picking a couple up with the lower picks also

Come on Dcar you know the front office has a soft spot for injured hidden gems that never pan out. LMAO

Why are you soooo negative all the time?.They take a shot at a 6-7 239 lb wr that ran a 4.5 at the bc pro day last week, and you rip them.The trade of a 6-7 de geathers was also worth a shot.I feel a lot of tom gambles influence here.I like all the additions they have been making and the league has noticed .

From what I can see it’s a possiblity Kelce may not be our center next year. It seems Chip likes size and weight, Kelce is kind of on the small side. But we shall see. Hey D at least that kid is big no more smurfs come on man.

DCAR can’t help himself… He is always negative and plays it off as some sort of truth… This is a low level move very little risk, kick the tires no biggie

hac, I always speak the truth & am always brutally honest. Nothing less, nothing more! Dude tore his ACL, & hasn’t played since the 2011 college opener! If it is such a low level move, why would Weaselman have signed him to a 3 year contract? I hope he does work out, because dude is huge, & WAS, pretty quick for his size. But, to me, this is a typical sign an injured player, where they think they’re cute, in signing reclamation projects! That’s what this entire off-season has been!