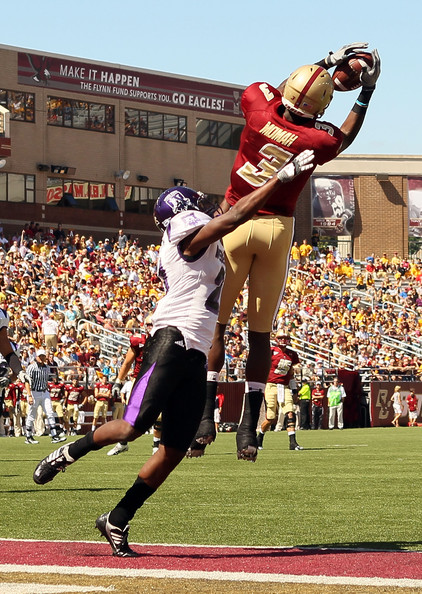 Eagles head coach Chip Kelly said he wanted to get bigger as a football team and he wasn’t kidding.  Today the Birds signed 6’7″wide receiver, Ifeanyi Momah, who played his college ball at Boston College.

Momah who hasn’t played football since 2011, recently ran a 4.4 forty-yard dash in front of some of the Eagles scouts.  Obviously, it’s not easy to walk away from a 6’7″ and 239 pound wide receiver who can run that fast.

A serious knee injury in the first game of the 2011 season ended Momah’s career at Boston College.  He did go out with a big bang on that September Saturday by having a monster game against Northwestern, when he caught eight passes for 157 yards.

In 2012, Momah’s effort to secure a sixth year of eligibility was turned down by the NCAA.  He could have been drafted last year, but he was still rehabilitating from the knee surgery.  The 4.4. time in the forty lets us know that he’s finally recovered from the surgery.

Leadership Will Be Key To Locker Room Changes For Eagles

Damn that’s one tall WR. I actually love this move. The Eagles have nothing to lose and so much to gain if this kid turns out to be something special. Sounds like this guy could be our red zone specialist

gm, I think he was being sarcastic, & that’s what he was saying. Maybe I’m wrong. LOL!

Yeah I’m a give foles a shot guy. Hate me if ya’ll must.

One thing for sure, with the acquisitions on Benn & Momah,
Chip Kelly obviuosly wasn’t Satisfied with the Receiving Corp of
D-Jax, Maclin, Avant, Cooper and D Johnson which I am glad to finally see
For I haven’t been satisfied with this Group collectively the last 2 Seasons.
I believe Avant is trade bait and Cooper is simply not good enogught
And do remember that Maclin is in final year of his Rookie Contract
And will need to have a big year if the Eagkes are to resign after
2013.. Lots of Competition and now some size and red-zone a targets along with TE Casey should make the passing game more effective in the Red-Zone than we seen under AR and Co the last few Seasons
Keep bringing in Takent with size and speed
Add these guys to the DL Gearhers they got from and this tells me they are going to Draft heavy at the OL Positions
We could see 2 OL picks in the first 3 Rounds
(OT Fisher in the 1st and Guard/Tackle Pugh in the 2nd or Guard
Larry Warford or even Guard/Tackle Kyle Long or Center Schwartz in the 3rd and I am ok with any of these Selections to rebuild the right side of the OL

Kyle long is a very good player if you check out the fiims of him.I see him in different scouting reports as a guard prospect that can play tackle.I see him as a rt with the potential to move to lt.I would be happy as hell to see fisher at #1 ,manuel at #2 with a trade up into late 2 to get long.Left tackles are one of the hardest things [after qb] to acquire.I believe that would give them a rally good [and big] qb prospect that has a chance to be the qb of the future. I know gm cliff will weigh in negatively about manuel ,but if you all check out the youtube videos of him ,and know anything at all about football, you wont find a big differencwe in manuel and gino smith [not enough of a difference to warrant the 4th pick in the draft instead of manuel in the 2nd rd]Fisher is 10 year a pb tackle and i hope he is their pick.

Your right Joe…neither one of them is worth drafting especially Manuel, and I don’t like Kyle Long a little bit.

But we do agree about Eric Fisher; He should be the pick, if they decide not to trade down.

Don’t watch the youtube clips, they generally, give you all his good plays. Watch his highlights from his rookie year in the NFL, and you will see that you don’t know football.

You obviously underestimate Warford, he is a better Prospect than Pugh. Warford is not going to be drafted in the 3rd, he will be drafted in the 2nd, and before Pugh. Pugh isn’t even in the top 5 OG Prospects of Kiper, Mayock, McShay. or GMCliff……

Also a Warford fan Pman. He manhandled another 1rst rd DT, Richardson, in the Mizzou game. I don’t know if he could keep up with Chip’s desired pace / snap counts. I like him for MIn or Pitt. I would that we could see a few OL picks taken in the first few rounds, but I would add Schwenke in the 3-4 rd area. Versatile, athletic center w guard experience. He could compete w Kelce for starting C and at worst provide good insurance if Kelce isn’t all the way back.

I like Pugh because he can play RT and RG
Warford is strictly a Guard.. I bet you $10 to your Charity of Choice that Pugh gets selected before Warford..
Pugh and early 2nd Rounder, Warford a late 2nd/Early 3rd Rounder

He may be able to do both, but he isn’t dominant at either position. Warford is at his position. I’m only interested in those players.Thats what I mean, I think you are looking for flexibility, finesse players, where as I am looking for outright dominance my friend.

Hows the weather down in Charlotte Paul. I’m thinking about moving there.

Eagles would have an awesome OL for the next 6-8 Years
I would have no problem if they did this, though it wouldn’t be the most exciting Draft, but 3 Goid Apkayers to add to the OL for a long time
(both Peters/Herremans) don’t have a lot of time left..

I’m starting to think that Joe Sports is really Howie Roseman, under that assumed name.

Warford is a Solid 2nd Round Pick, he won’t last till the 3rd

End of 2nd/Early 3rd Rd for Warford most likely

It kind of starts where Warnack/Cooper go in the first
Then you have some OT/Guards like Fluker, Pugh,Long,
Watson that project as 2nd Rounders and have more versatility since they played OT in College but probably project as Guards in the BFL pushing their Value above Warford.. But I like Warford and Armstead as pure Guards over these other players

If all the Eagles do, is draft nothing but O-linemen, D-linemen, & Secondary, I’ll be ok with it.

I don’t care where he goes, as long as it’s not with the Eagles, that would be a wasted pick….I think he stinks

Hw isn’t a dark horse as far as I am concerned. He is a guaranteed beast in the trenches.

He isn’t a dark horse as far as I am concerned. He is a guaranteed beast in the trenches.

Damn right gmcliff, I’m with ya on that one too buddy. A guaranteed beast in the trenches! plus he runs a 4.4…

My bad gmcliff I’m on subject but looked at the big WR forty, I got you!

If Masmo doesn;t work out and make the Eagles, maybe the 76ers can take a look at him ..

NFL News,
CB Buster Grimes (Falcons) signed a 1 Year Deal
With The Miami Dolphins for a reported $5.5 Million
Grimes was a Pro-Bowler for the Falcons in 201’1 but was injured early in 2012 and missed most of the Season..