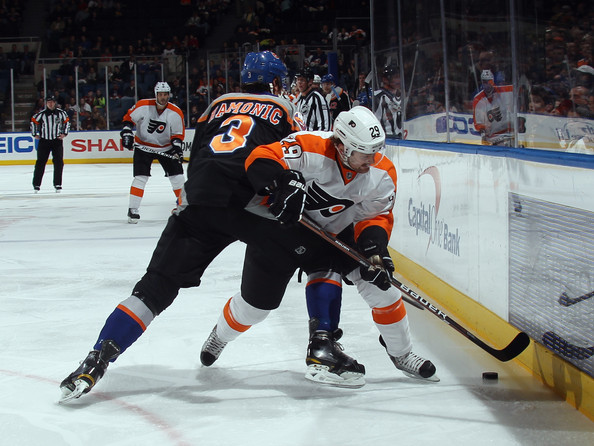 The Philadelphia Flyers have traded forward Harry Zolnierczyk to the Anaheim Ducks for “defenseman” Jay Rosehill. The quotes are there because Rosehill is used primarily as an enforcer.

Zolnierczyk was recalled to the Flyers recently to finish serving a four-game suspension earned for a head hit against Mike Lundin of the Ottawa Senators. He has been a healthy scratch recently, along with fellow call-up Tye McGinn.

In 44 games with the Flyers, “Harry Z” scored 3 goals and 7 points. His main asset has been his speed, which he used frequently in his call-ups as a fourth line forward to pin opponents in the offensive zone.

Moving Zolnierczyk should not impact the Flyers in the long-term. The deal is fairly pointless, though, as Rosehill is not generally effective for anything resembling hockey besides fighting. The cap savings in the trade equate to about $50K.

If this is the only move the Flyers make for the trade deadline, it could certainly be worse. In all likelihood, it was an overreaction to the fact that Jake Voracek had to stand up for Claude Giroux last night when that’s not really his responsibility.

Revere Not Rollins In Leadoff Spot For Phils

Wasted trade chip. Could have used him in something bigger. Rosehill gives us nothing

Out of the playoff picture, no D-man & not many skilled forwards, so they add a useless goon. Also they’re talking about getting Clowe from the Sharks. Power forward, with ZERO goals. BWAHAHAHA!!!! The comedy never ceases with that organization! The love them some muckers & grinders, don’t they?!?!? I will say it again, THEY WILL NOT WIN ANOTHER CUP, until Snyder sells, or croaks! The Broad Street bully way of thinking, is prehistoric, & must go! Is it so much to ask, to draft some good D-men & goalies. How many drafts do they have draft a Center-man. We need skilled forwards & D-men, not muckers, grinders, useless goons, & pylons on the blue-line!!!! I’m disgusted with this team! They don’t deserve to make the playoffs!

Not sorry to see Harry Z go. That dude really didn’t bring much to the table except for late hits and cheap shots.

Harry Z’s three goals included last year’s output. If you’re making comparisons, Couturier has 15 goals and 34 points in that span… not to be nitpicky…

You already have Rinaldo in the lineup and Harry Z was a less effective and less intelligent Rinaldo.

Couterier is having a tough season so far, but that doesn’t take away from what he did last year in the regular season and in the playoffs. Try again Eagles.

I don’t like Couturier at all, he isn’t winning face offs, he isn’t hitting anyone, he isn’t scoring, he isn’t fighting, as soon as he gets on the ice it is boring hockey

This 2013 Flyer Team is probably the worst I can remember in winning Face-Offs.. The lose about 55% of the time and are even worse in the most Critical Times, in fact, their overall Special Teams Play (which have always been pretty good) have all lacked this Season and in a short Season with lots of games in a compressed time frame, Special Teams becomes even more important.. They need a lot of changes all the away around from their ROster, to their Coaching Staff to the Front Office in my opinion

they were about the same when richards and carter were the top 2 faceoff guys. with giroux we are much better as the #1 faceoff guy we are about 4% better than we were when it was richards. problem is everyone after giroux sucks like 44% but carter was 47ish

If you’re going to throw a player away, can’t you at least get a draft choice instead of someone who’s going to be a scratch for the rest of the damn season? Pathetic.

It’s hard to believe we were in the Cup finals a couple years ago.

It’s even harder to believe that we can ever get that close again with a front office, coach, and owner as completely disconnected from the style of play that works in this league.

But hey!, we just soared past the Sabres in the standings – so I must be the fool here and Holmer, Lavy, and Eddie are the geniuses.

I got a call the other day from the Flyers about coming back to the season ticket-holder fold. I couldn’t help but laugh. They have to be kidding. A neighbor of mine bought season tickets for the first time tho… I’m not kidding when I tell you he still doesn’t know the difference between a “crease” and a “faceoff circle.” I guess that’s the fan base now. Good luck with that.