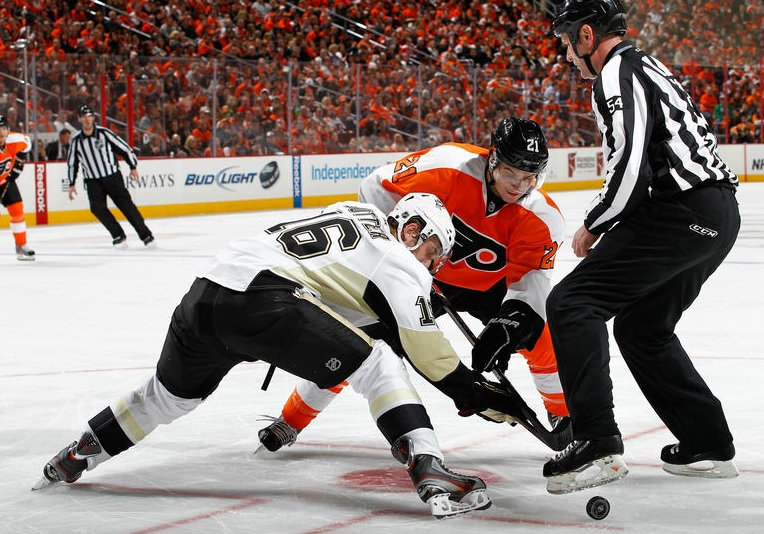 The Adirondack Phantoms have welcomed a number of new additions in the past few weeks as a result of junior seasons ending and free agent signings from the Philadelphia Flyers organization.

Flyers general manager Paul Holmgren traveled to Glens Falls this weekend to watch the farm team firsthand in two games. The last place Phantoms, with a 28-36-3 record heading into the weekend, won both contests. The Sunday afternoon game against the Binghamton Senators was miraculously tied by AHLer Garrett Roe with 0.3 seconds remaining. The Phantoms finally claimed victory in the 15th round of the shootout.

Diana C. Nearhos of the Post Star reported via twitter that she spoke with Holmgren about the team and several of the new players. “Holmgren just confirmed what we all knew: Laughton is not long for this team/league. He said most of the rest will be here next year.”

While no organization in the NHL is as unpredictable as the Philadelphia Flyers (which is neither an endorsement nor an indictment), Laughton appears to be a lock for the 2013-14 Flyers roster.

The biggest “knock” against Laughton at the NHL entry draft was that it was unknown whether he would develop into a top six forward in terms of offensive talent. The rest of his game- skating, hockey IQ, leadership, physicality, defensive prowess- was considered elite.

From the season opener against the Peterborough Petes until January 11 (when the 18 year-old left the OHL temporarily for the NHL), Laughton scored 13 goals and 33 points in 32 games played for the Oshawa Generals. He was on pace for a 27 goal, 69 point season.

During his five-game stint with the Flyers, Laughton didn’t look “out of place,” but he was unable to earn his first NHL point and finished with an even plus-minus.

One telling statistic that bodes well for his future is that he started in the offensive zone on just 29% of his shifts while finishing in the offensive zone on 50%. In other words, head coach Peter Laviolette entrusted him with a lot of defensive zone responsibility and relied on him to get the puck out of their zone. The heavily weighted zone starts can also explain why he wasn’t getting more than two shots a game on average.

Since his return to juniors, Laughton added 10 goals and 23 points in 17 games with a +18 rating. Extrapolate those results and the pace, if set at the beginning of the season, would have resulted in a 40 goal, 92 point season.

Laughton scored his first professional point and first professional goal this weekend with the Phantoms as well. The goal was a shortie against Connecticut Whale goaltender Cam Talbot (no relation to Max) that can be viewed here.

The biggest concern surrounding him now is whether he can rein in his physical play so as to not be a liability. His boarding of fellow prospect Frederic Larsson during the rookie camp last July foreshadowed two boarding incidents that occurred during the OHL season. Between both major penalties, Laughton was suspended for fifteen games.

Bill Meltzer of HockeyBuzz, addressing the topic of Danny Briere’s future with the organization, touched on one of the predominant issues for the Flyers moving forward in his latest musing.

“Many people focus exclusively on the defensemen (and/or the goaltending) when they talk about the team’s defensive problems. Well, this team’s goals against average isn’t going to improve significantly unless they get more consistent defensive commitment from forwards as well as defensemen.”

Laughton’s inclusion into the line-up for the 2013-14 season should help address this personnel issue. Between Laughton, Sean Couturier and Claude Giroux, the top three lines should (on paper, at least) be able to better support whoever is tending the net (which is a whole other issue entirely).

Notes From The Phillies’ 2-1 Win Over Miami