Notes From The Phillies’ 2-1 Win Over Miami 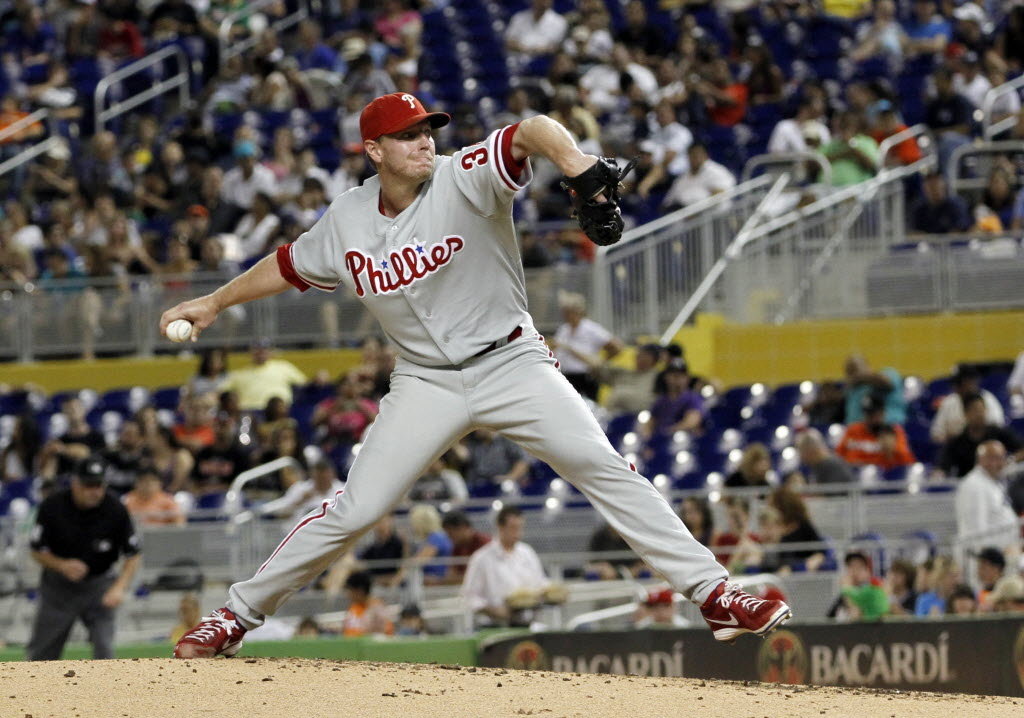 The Philadelphia Phillies finished their weekend series with a win on Sunday afternoon, edging the Marlins 2-1 in Miami. Their record now stands at 6-6 on the season.

Before this series began, the general consensus was that nothing short of taking two of three games from this series would be acceptable. The Phillies managed to meet their quota, but they did it in a pretty discouraging fashion (at least offensively).

The Marlins pitching staff has some competent pitchers, but there’s no excuse for the Phillies’ hitters to struggle as heavily as they did over three games. They didn’t just struggle against the Ricky Nolasco’s and Jose Fernandez’s, they couldn’t even hit Chad Qualls despite having opportunities to face him in three different innings today. Nothing else I could say about the lineup could be more damning than that statement.

Offenses go through slumps in baseball, and its no reason to get overly concerned. However, the Phillies are in a spot where they have to take advantage of games against inferior competition. They can’t afford to fall too far behind the Nationals and Braves this early in the season, and the lineup had to give the team more than what they did over the weekend.

The good news for the Phillies was that the Miami lineup was as bad as advertised. This is a lineup stocked with reject Phillies Greg Dobbs, Placido Polanco, and Juan Pierre, and was without their only capable hitter, Giancarlo Stanton for the entire series. On their best days, this lineup is going to have trouble scoring more than two runs, and that was the case for this series.

The best news from the series was the performance of Roy Halladay on Sunday. Granted, this was hardly a major-league lineup, but it was still impressive to see Halladay shake off his struggles that have been going on for well over a month and deliver a seven-inning gem. Hopefully this is a start that will restore Halladay’s confidence, and serve him well in his upcoming starts.

Revere really can cover ground. Nix hit a bomb. Good game. It’s ashame, we can’t play the beer leaguers every night. Those fans, ought to storm Lorias mansion, with pitchforks & torches! What a disgrace! Talk about a team, that needs to be contracted & expunged!

fans? you mean the ones who come dressed as blue seats! ? it is a terrible baseball city– and with what they did in the off season as you said before contract those a.holes.

Hope Galvis is ok, after getting hit.

Take a Wn anyway you can get them.. That’s 2 Serues Eins in a row and something Positive to build on.. The Good News is that both Hamels/Doc Pitched well and the Bullpen did a good Job all Series
There’s nothing wrong with winning 2 out of 3 on the Road regardless if it’s the Marlins, chances are moving forward, the Phils will be in a lot of close games
And if they can Win 14 Games (even 13) out of their first 25 Games until Ruiz returns, they will stay within reach of the Braves/Nats
Ruiz’s prescence is a big one behind the Plate, handling the Pitchers and of course his Batting ability in key moments..

These Braves are not the same old Braves, they have Speed, Power, Very good Defense, and a Roster full of Players in their Primes and still have a great Bullpen and a very game Manager in Gonzales, what they don’t have is dominating Starting Pitcher that they usually have had in the past.
They are smonmg hot out of the gate which does not bode well for the Phils

Reported late Sunday night Doug Collins set to resign. What a mess the Sixers, Flyers and Phillies are. The honest to goodness truth is the Eagles at 4-12 are the closest team to a championship lol. My goodness.

the phils are a mess? how?

Phillies will stay at 2nd maybe claw to first but overall stay at 2nd for the year. I dont see the mets being a threat the Nationals are Solid (Sadly) Braves are to but they are like the Fish they Flounder miami is miami so if we get things together we should be good but it obviosuly wont be easy.

phils right now are clearly the third best team in the division, they will need to play exceptionally well and get a break here and there… looooong season!

i like what he is doing with galvis at this time… he is getting utley, rollins and young off days which is necessary

A couple of Team Stats

Team Pitching is Ranked 13th in th NL with a Team ERA of 4.82 so far in the Season and the biggest area of improvment that’s needed and this is even after the Good Pitching this Weekend versus the weak Marlins..Hopefully if Hamels/Doc can stay on track and Pitch well, the Phils can jump up in the PItching Stats pretty quickly. but they must get that TEAM ERA below 4.00 and closer to 3.75 to have any chance to compete with the Top Teams

have a cigar doesn’t like hard stats, he can’t manipulate them with pom poms

i said they were third best team in the division…is that pom pom waiving?

Meanwhile Brewers RHP Kyle Loshe has Pitched 13 Innings over 2 Starts
with 3 ER and an ERA of 2.08 and has always been a fast starter as he signed with the Brewer’s about a month ago..

Have a cigar – these were the chumps of MLB ( KC, NYM, Miami) .500 is a little disappointing – it is not panic time but definitely a concern

Is there anyway we can trade Howard to an AL team so he can finish his career off as a DH? This guy CANNOT run. It’s horrible to watch.

to all you guys who are banking on jason peters playing at pro bowl level after 2 achilles tears…take a look at howard run after 1 surgery!

i don’t know how the braves are doing it…they have four starters batting below .215…

WOW! Are we lightening up a bit? I see some teeny bits of criticisms today. Are we finally seeing the light, Superfan, & realizing the realities of this squad?

contrary to what you think i am not delusional i see their warts — i watch almost every inning of every game– i understand they have aged and see the holes.
my point in ‘defending’ RA is simply that he has made some bold moves in an effort to win it all– and in sports they don’t always work out.

What bold moves???? He was given an open checkbook, like a kid in a candy store, in which an GM, could have accomplished, & he still failed miserably! Stop it now! He took a WS Champion team, regressed it every subsequent year, with the 3rd highest MLB payroll, with no future plan, nor position prospects in site. Enough said.

If you can Keep Teams from Scoring many Runs with Good Pitching, and Score Runs in bunches via the Home Run Offensively and play sound Defense, that’s a pretty good Recipe for Winning a lot of Games .. So even Uggla, Upton may not hit for HIgh Average, these guys will pop 25-30 HR’s Season
The Braves OF of Upton,Upton, Heyward are all younger than 28 Years old, All signed to long-term deals and will probably be around for the next 5-6 Years so get used to seeing the best OF in the NL down in Atlanta

Haveacigar? Are you new to this? The Braves always start off hot. Then they flounder. Same ol song and dance.

was just saying that the bats aren’t that hot yet they are getting wins.. i know its a long season, i know the phils are a much better team in july/august… i get it.

You guys are fools if you think this is the same old Braves.. This Team is not only built to Win in 2013 but for the next 5-6 Years with a very young Core of everyday Players, a Deep Pitching Staff with many young arms and a minor league System loaded with more arms..
Best OF in the NL, have young SS (Simmonds) and 1B (Freeman) who will battle for All-Star Spots the next 6-8 Years and a quality
Cather,3B & 2nd to go along with the Best Bullpen bar none in the MLB
and a good Game Manager and excellent GM in Frank Wren..

Shutup paulman — every year you pick the Braves and every year they fail. You are a closet Braves fan. STFU.

INcorrecto again Birdbrain
Last Year I picked and was probably the only person to pick the Washington Nationals to Win the NL East with the Braves finishing 2nd ahead of the Phils
I’ve been pretty spot on with this club the last few years as far as their Playoff/WS chances go.. You may not like what I have to say, but it’s been the truth…