Shutout by Brodeur, Flyers All but Eliminated 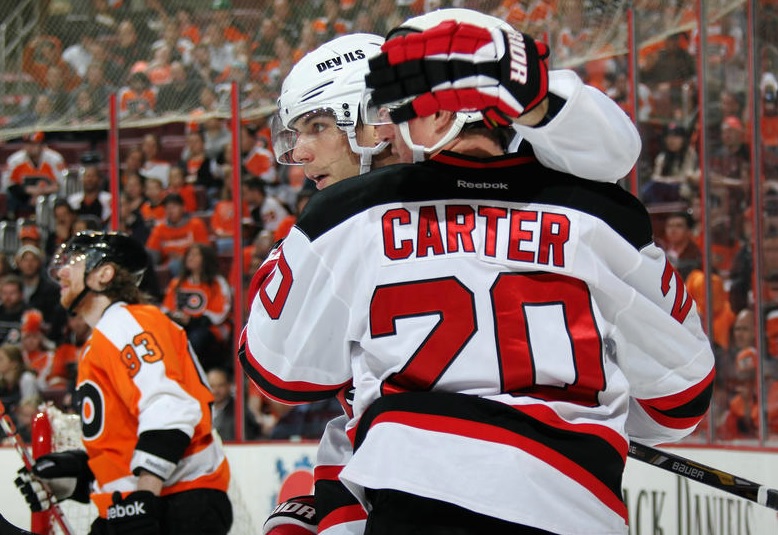 The New Jersey Devils entered the Wells Fargo Center with an 0-6-4 record in their last ten games.

The New Jersey Devils entered the Wells Fargo Center without having held a lead once in the month of April.

The New Jersey Devils left the Wells Fargo Center with two points after shutting out the Philadelphia Flyers 3-0.

The 2013 NHL season is over for the Flyers. They have not been mathematically eliminated, but all it will take is a win for the New York Rangers tomorrow night to make it official.

It’s not that many fans expected the team to make the playoffs at this point, but one would have hoped to see a better effort against a division rival that was in worse shape than the home team before the puck dropped.

Instead, the Flyers skated with virtually no energy. The passes were either off the mark, too soft to reach their target, or low-percentage passes through traffic that led to easy turnovers.

I asked head coach Peter Laviolette about how he addresses those types of passes after a game.

“Every game is different. I don’t necessarily think one game or one period leads to to the other. I don’t think it was necessarily that way in the first period,” said Laviolette. “Second period, I would agree with you. Even the powerplay passes seemed a bit off tonight. I think New Jersey and the way they pressure also adds to that. But I think you’re right in what you saw. The passes were off just a little bit, or we tried to pass when maybe we should have shot. We had opportunities to shoot and looked for something better.”

Laviolette wouldn’t comment on specifics, but everyone in the press room was thinking of Matt Read’s missed opportunity in the second period after that remark.

At the 4:58 mark of the second period, Read stripped Patrik Elias of the puck and had a near breakaway the other way. As he skated into the offensive zone, though, he slowed down and waited for teammates to catch up rather than take the one-on-one shot against Martin Brodeur. The time spent waiting to make the play eventually ended with it being broken up.

After the puck was cleared from the zone on the next shift, Simon Gagne tried to pass back to defenseman Erik Gustafsson while his linemates worked their way back to the neutral zone. Gustafsson fumbled the puck, appearing to not expect the pass, and a two-on-one developed the other way.

Ryan Carter, a fourth liner for the Devils, beat goaltender Ilya Bryzgalov with the ensuing wrister.

The Devils carried the one goal lead late in the third period, when another mistake from a rookie defenseman cost the Flyers a comeback bid. Oliver Lauridsen fumbled the puck at center ice and forward Jacob Josefson quickly moved the puck to a speeding Matt D’Agostini. Brayden Schenn, expecting the puck to just be fired into the offensive zone, wasn’t ready to cover D’Agostini.

Bryzgalov struggled with the one-on-one approach (not that it’s an easy task for a goaltender), and couldn’t make the save. Breaking his stick against the post, Bryzgalov looked like he wanted to just head home at that point. He played well (the third goal was an empty netter), but fans who look at the box score only are going to see this as another reason to prematurely anoint Steve Mason as the answer in net.

Games like this make it difficult to see the bright spots in the organization (unless you’re looking forward to the NHL entry draft). While Peter Laviolette is a good coach and wouldn’t be out of work for long, an outcome like this might just be the final evidence that it’s time to begin looking for a fresh voice.

“Players care. The organization cares. It’s not a comfortable spot. There’s been other nights like this as well, but you got to keep pushing forward,” said Laviolette.

Have to agree with that statement, even if none of the players, coaches, or management staff seem to quite know how to achieve that.

Notes From The Phillies’ 8-2 Win Over St. Louis

This 2013 Flyers Team did not deserve to make the Post-Season this Shortened Season and deserves to be home watching the Playoffs like the rest of us.. They just were not a good club any way you look at it

Josh, I don’t think that Mason is that much better than Bryz. I think that they are both average goalies, but one will be much cheaper (against the cap) to keep, so that is the guy that I would keep. Same production, half the cost.

My personal opinion is that you can’t throw away four years of bad records and assume a change of scenery will instantly make Mason “consistently good.” That doesn’t mean he can’t improve or have better results in Philadelphia; just that nothing in sports is absolute and the best you can do is make educated assumptions based on what you know.

If Bryzgalov is to be bought out, they simply better have another quality goaltender ready to replace him than Steve Mason.

I agree with that, but if we were stuck with one or the other, I would go with the cheaper of the 2 inconsistent goalies.

I’ve been trying to avoid being the umpteenth person to write about a Bryzgalov buyout, but in short, the compliance buyouts can be made either this summer or next summer.

Point is, there are very limited options this offseason unless you’re looking for just a back-up goaltender. Next summer, the market will be much better. A trade for Jonathan Bernier, who is unproven and risky, would require giving up an asset like Matt Read. I’m not fond of that idea.

JJ, if it only take Read to get unproven, risky, but talented young goalies like Bernier, or Schneider, I’d do that in a heartbeat! It’s not like Read is Stamkos, or anything, or that we are cup contenders, next year. We need a goalie, an entire defensive corps, & at least 2 scoring wingers. Guys like Briere, Bryz, Hartnell, Fedatenko, Slowburn, Meszaros, Lilja, Gervais, Foster & ever Kimmo, need to go! I still don’t know why Holmgren, resigned him?!? Pure idiocy! Build around the Grossman, the Schenns, Giroux, Simmonds, Vorachek, McGinn, & Laughton. I think Couturier is an overhyped player, who will be nothing more than a defensive forward. He’s soft & has shown, next to nothing offensively, in 2 straight years. He got unwarranted hype, for shutting down Malkin last year, & did nothing else! I’m highly disappointed & disgusted with Giroux, his leadership & performance this year. As I stated, when it happened, he should have never been given the C, it needed to go to Kimmo, or Talbot.

This a middle of the pack/bottom half of a Roster in today’s NHL
Special Teams were horrible this Season as well as inconsistency along the Blue Line, Goal Tending and even on the Offensive end..
No quick fixes with this Franchise, lots of upgrades need to be made

I still like the Eagles chances for a fast Start and GC Kelly could use the Conditioning and Up-Tempo versus his Opponents with 3 Games in 11 Days which 2 of them are at Home and against Teams (Chargers/Chiefs) that have new Systems & New Coaching Staffs and Roster Changes as well
I expect the Eagkes to come out 2-1 in the first 3 Games which will be a must if they are to contend for Playoffs..

Holmgrem & Snider ruined the team when they traded Mike Richards and Jeff Carter — Suter and Parise spoke for the league, they don’t want nothing to do with this franchise