Notes From The Phillies’ 8-2 Win Over St. Louis 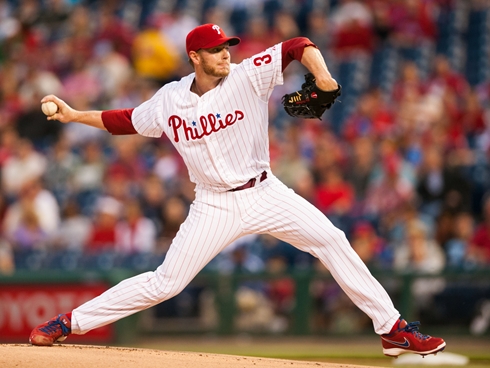 The Philadelphia Phillies snapped their four-game losing streak on Friday night, taking down the Cardinals 8-2 in Philadelphia. Their record now stands at 7-10.

It’s great to see Roy Halladay enjoying success again, but don’t get carried away with excitement.

I think what you’ve seen from Halladay in his first four starts is a pretty good sample of what you’re going to see from him throughout the year: highs and lows. There’s going to be nights that he feels good, and will be able to recapture his old form. But there’s also going to be times like his first two starts of the year where he’s very hittable.

Halladay won’t always be able to hide the fact that he’s lost something physically. He’s in the process of reinventing himself, and finding new ways to get guys out. He can still be a very good pitcher in a rotation, but his days as a top-of-the-line starter are through.

Also consider the facts that in his last two games, Halladay had the benefits of facing a minor-league lineup that made things easy on him by swinging early and often, and tonight his offense made his job considerably easier by spotting him eight runs in three innings. That’s not to take away from how well he was able to pitch, but it’s just some things to keep in mind.

Offensively, while it was great to see the Phillies breakout for eight runs, it’s hard to get excited because we don’t have much reason to believe that this group will be able to sustain it. The offense has looked better in the last couple of games since Charlie Manuel shook up the lineup, but unless the hitters collectively change their approach, their going to continue to be frustratingly inconsistent.

Shutout by Brodeur, Flyers All but Eliminated

Notes From The Phillies’ 5-0 Loss To St. Louis