Notes From The Phillies’ 2-0 Loss To Pittsburgh 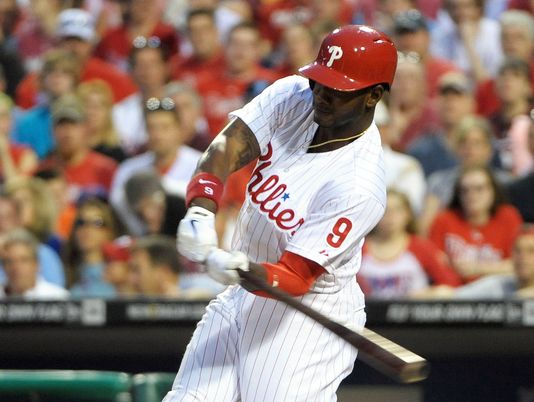 The Philadelphia Phillies had their two-game winning streak snapped on Tuesday night, falling to the Pirates 2-0 in Philadelphia. Their record for the season drops to 9-12.

Cole Hamels has pitched well for the most part this season, but he’s now 0-3 and is in danger of not winning a single game in April. Hopefully in his next start, the offense will score him a couple runs…you’d hate to see Hamels suffer through the same ordeal that Cliff Lee had to go through a year ago.

It’s disappointing to see this offense continue to have completely hopeless nights like this. They just can’t find any consistency, nobody seems capable of stepping up and carrying the team right now.

Ryan Howard’s batting average is just fine at .274, but his lack of power production hurts. Sure, he’d benefit greatly if the guys around him played better too, but he’s got to better than one homer and six RBIs 21 games into the season.

Then you have guys like Domonic Brown and Ben Revere, who played so well during Spring Training and all of a sudden can’t hit to save their lives.

The Phillies will resume their search for answers tomorrow night, with Roy Halladay aiming for his third straight quality start.

Leonard Weaver Retires As An Eagle

resting guys? hey Charlie we are in panic mode

you are in panic mode in April? really? hmmm

If they are not above .500 significally this is the D-Day date
Tuesday, July 16, 2013 MLB All Star Game
for sale:
2nd base Chase Utley
RHP Roy Halladay
C Carlos Ruiz
Charlie Manuel replaced

I am not in panic mode, but I am definitely uncomfortable with the offense right now. I think that we are putting a lot of weight on Chooch coming back. I think that that he is a good hitter, but I think that he played over his head last year.

Ruiz due back in 5 days,but has some health issues and may not be ready for a couple of week, but bottome of Order (Brown,Revere,Catcher and PItcher Spot) all below the Mendoz Line.. while the Top half is hitting the ball ok, but with little Power or Extra Base Hits making Runs tough to come by..
Final Record for 2013 Season 83-79 in a close battle with the NY Mets for 3rd Place in the NL East..

it looks like D. brown will never be the player he was supposed to be…..
that is a real shame- he was going to be an influx of youth and productivity and it looks like he can’t get it done.

And you’re surprised?!? Anyone who has eyes & has ever played the game, can see, that he is undisciplined, over-matched, & can’t play on this level. I only have been saying it, for 3 years now, but what do I know?!?

i am a bit surprised actually considering he was a 300 hitter in the minors and was considered a very top prospect by real baseball people. obviously there is a huge hole in his swing that minor league pitchers haven’t been able to expose

He has seemed to revert back to his flawed, undisciplined ways, that he had before Spring training. He is either stubborn, stupid, or incapable of following advice, & the teachings, that seemed to improve his Spring training mechanics.

I still can’t believe people had the bean-bags, to compare him, to Strawberry & McGriff! BWAHAHAHAHA!!!!

This team, is the most boring, undisciplined, clueless, punchless, over-matched, bunch of overpaid mutts, that I’ve seen, in a LOOOONG time! The entire outfield is putrid! The entire infield are in deep decline, in skills. 4/5 of the rotation is a crap shoot, & the BP is a mine field, AGAIN!!!! The Architect of these failures, band-aids & has-beens, has got to go, ASAP!!!! It’s already over a year too late! The time clock is counting down.

2 nights in a row a Double play at home plate, LOL
Mayberry and Utley almost collide on a popup right after Young and the catcher — they are so aggressive to catch the routine pop-ups but then look at 3rd strikes – this team is a mess