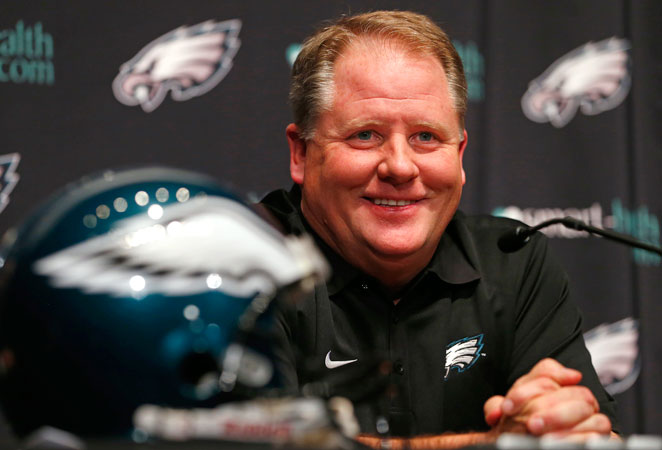 I got the chance to spend some time with the Eagles coaching staff last week during Chip Kelly’s event for the team’s alumni.  We had a great time talking football and sharing stories from games and years gone by.

Kelly addressed the group and he understands that Philadelphians want to be proud of the way their football team plays the game.   They plan on fielding a tough, physical and well prepared team that will properly represent the city.

Even though Kelly is portrayed by some as a “mad scientist on the football field”, he’s not.   Underneath his pursuit of getting every advantage he can find through scientific knowledge and football savvy, I see a “tough, old fashioned football coach”, who believes in winning the game at the line of scrimmage.

The Birds believe they will have a very good offensive line, which will allow them to run the football effectively.  Kelly believes in the running game.   You’re going to see the Eagles attack defenses with a zone blocking scheme along with elements of the read option attack in it.

If you detected some excitement from the new coach when he got the chance to watch a healthy Jason Peters, you weren’t mistaken.  It also wasn’t a surprise that the Birds used their first pick to draft an offensive tackle, which will allow them to move Todd Herremans back to his best position and thereby improve two positions on their offensive line.

It’s not an accident that Alabama offensive line coach Jeff Stoutland is here to coach the offensive line.  The Eagles are intent on winning the battle upfront.

Kelly’s offense wants to dictate to the opposing defense with both a tough ground attack and an explosive, but turnover-free passing game.  They want a high completion rate from their quarterback and their passing offense.

Again, they will be running parts of the read option and increasing the tempo of the game to put pressure on the defense.  They’ve taken parts of his Oregon offense that can be transferred to the NFL, and parts of the West Coast offense, then merged them together to form the offense the Birds will be running.

Kelly and his staff know how important it is to stay away from turnovers, so this will play a major part in who the quarterback is going to be.  They know that you must be able to audible at the line of scrimmage.

On the defensive side of the ball, the first thing they talked about was a change in the defensive culture, especially in the secondary.  It wasn’t an accident that all the players they signed in free agency are known for playing hard.  Their secondary might not be the most talented, but they will tackle you when they get the chance.

Unlike the group that took the field a year ago, this defense will play hard and to the whistle on each play.  They will hustle to the football, then hit and tackle ball carriers.   That includes the secondary.  You’re going to see 3-4 personnel ( three defensive linemen and four linebackers)  in multiple looks, some 3-4 fronts and some 4-3 fronts.

The Eagles coaches and player personnel people are all in agreement that anything short of the players best effort will not be tolerated.

Evan Mathis Has “Clean Out” Surgery On His Ankle