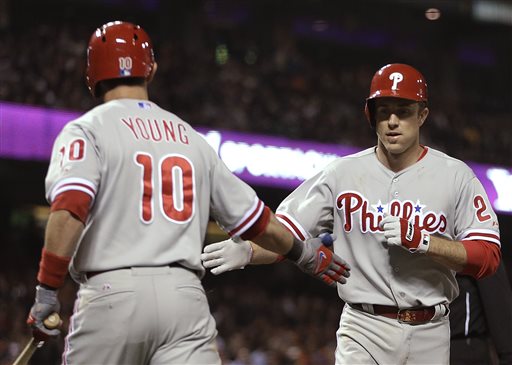 The Philadelphia Phillies won their second straight game on Tuesday night, taking down the Giants 6-2. Their record improves to 16-18.

It’s nice to see the Phillies have a little success against one of the better teams in the National League.

Once again, the team received quality performances from their pitching staff and from their lineup. If the offense could ever develop into a reliable threat to score at least three runs a game, the Phillies would have a great chance to win every night. Their starting pitching has been excellent for the most part. Right now, Cliff Lee, Cole Hamels, and Kyle Kendrick are giving the team good (if not great) efforts when they take the mound. Even Jonathan Pettibone has performed remarkably well.

The biggest problem that this team has had is that the offense has taken too many nights off. The last couple of nights, the lineup has managed to stay focus and do some damage against a couple of talented pitchers. You’d like to think its a sign that this group is turning the corner, but their history suggests otherwise.

Evan Mathis Has “Clean Out” Surgery On His Ankle

Utley & Kenrdick, are the only consistent positives! What a mess!

Another big win, keep the momentum and good play up..
1 Game and 1 Series at a time, collectively as a Team, they get right back in the thick of the NL East Race..

its crazy last year everyone wanted Cloyd up when he was dominating and they didnt make the call until very late… this year he has been a gas can and gets first call. I guess whoever is making these decisions doesnt understand hot hitters?

only thing i can think of is they wanted to replace doc with a righty specifically?

Morgan throws a straight fastball, 86-89 when I saw him recently, not much movement , fade on the change , cloyd not even as fast, but he’s from the right side

how can they get shut out vs the Marlins and then dominate the Giants? This team is a yo yo-
One day Go Fighting Phils the next F-ing Phillies.
Chris Wheeler needs to go —

Who is he? Adam Morgan is 23 year old lefty who is pitching in just his second season of Minor League baseball. He has rapidly ascended prospect ranks after posting a 3.29 ERA and 140 Ks in 123 IP for Clearwater and a 3.53 ERA and 29 Ks in 35.2 IP for Reading in 2012. Keith Law ranked Morgan ahead of Jesse Biddle, the consensus top Phillies prospect, in his most recent rankings.

Stuff: Adam Morgan challenged hitters throughout the night with three pitches: fastball, change-up, and a slider. He threw the fastball in the early innings at 88-89 and worked righties at the hands and knees. The fastball reached 92 MPH in the second and stayed between 91-93 for the majority of the night – he did hit 95 and 97 once each. To lefties, Morgan worked inside with the fastball and rarely threw his slider.

Morgan was not afraid to challenge hitters with his off-speed pitches, coming with change-ups in 2-1 counts three times. When Morgan is ahead in the count to righties, he looks to his slider. He caught a few Chiefs looking. Morgan showed remarkable consistency, remaining at 93 MPH late in the game, and not dipping below 91 MPH with his fastball. His biggest change of speeds on the night was 19 MPH (93 MPH fastball to 74 change-up in top of the sixth).

Morgan located his pitches very well – he induced very weak contact and was supported by Cody Asche‘s strong arm at third. His biggest mistake came against Jeff Kobernus in the third, leaving a fastball just a little too far up and middle in that Kobernus just cleared the left field wall with.

Fielding: Morgan got off the mound well, producing a nice play to his left and behind him toward Cesar Hernandez in the first, fielded two bunts well, and covered first base in the sixth on a ball hit to Cody Overbeck‘s right. Very good lateral movement.

Bunting: Morgan hit with Michael Martinez on first. He missed a fastball down the middle and then set down a nice bunt up the first base line.

Final Thoughts: In my opinion, Morgan could be a starter in the Major Leagues today. His biggest strength is his location and his changing speeds – his slider doesn’t have a lot of bite but caught righties looking. His 83-84 MPH slider can get predictable, however – he used it as his out pitch every time the count went to 0-2 or 1-2.

Didn’t throw like that on Sunday, most fbs below 90 and straight

**JUST IN**
Doc has torn Rotater cuff, frayed Labrum, caused by rubbing of a Bone spur. Likely Arthritis clean-out too. 3 months ++ recovery. Horribly ironic, that I had the same exact injuries, to my right shoulder. I also now have a snapping scapula, from the after affects. Basically his career here is over. It’s ashame!

Been saying for over a year, that he was pitching hurt, but these turds, dysfunctionally, ineptly didn’t! The idiocy of this Front office & Medical staff, may be the worst I’ve ever seen!!!!!!!

I stated then in Aug 2011 that something was wrong with Halladay after he pulled himseld out of the Cubs Game on that Hot,Humid,August afternoon..
He has not been the same ever since in my opinion and has been over-compensating with whatever occured that day, but it was more than Heat Exhaustion, it was something in his Arm/Shoulder, he became more bent when releasing the Ball and he release spot became lower causing his lower velocity and less command on his Pitches..

Doc crossing fingers for you but we still have:
a perfect game and a playoff no hitter to remember.

So this idiot has been hurt for this long and has said nothing? Done with him. Good riddance.

BoB, try blaming the true culprits! The ineptly, dysfunctional medical staff, & retarded front office! They have MRI’d him, & Xray’d him, 7-12 times, & failed to see, &/or ignored the issues. I admire him pitching through this injury, because I know how painful it is. Your retarded, imbecilic GM, & inept medical staff, is fully the blame, & should NOT, have jobs!!!!

Doc Halladay is everything that is right about sports,meanwhile you nitwit that you are praise Vick, wait for Vick like a messiah, but trash a bona fide superstar, hall of fame pitcher, good riddance to you nit wit bird brains

jakedog sunday was by far morgans worst performance of the year, may have just been an off day?

looks like roy shouldve never took the club friendly deal of 3 years 60 million and shouldve signed elsewhere for 5 years 100 million. whoever his agent is is dumb shit

He signed 4 years 80 million with a vesting option. Good contract for everybody. Dominating pitcher who was responsible for a lot of great wins

Don’t Phils hold an Option for Doc after this Season..
I could see them bringing him Back for ST next Season, but not at a big Salary,
Would any Team committ big $$ to him for next Year with his shoulder issues..
It will be interesting to see what happens, but I cannot See Phils or any other aream committing big $$ for the unknown the kids ahead for his Zpit hung Career.. I see him landing back at Toronto

It’s a vesting option Paul! He isn’t going to hit the qualifiers. Innings, DL, etc, etc. He’s gone, & in no way shape, or, form, do I bring him back! But knowing this imbecilic, SOB, GM we have, he’ll re-sign Doc, Utley, Young & Ruiz! If he isn’t fired, & they don’t make major changes, I might stop watching them all together! They are boring, old, undisciplined, erratic, & virtually un-watchable! I can’t take watching “Popup”- “no hustle” Rollins, Howard “the K”, “Juice-less” Ruiz & this horrific, trash truck juice outfield anymore. Not to mention, the enabling, dysfunctional, excuse making, lying, inept, imbecilic, front office & coaching staff!!!!