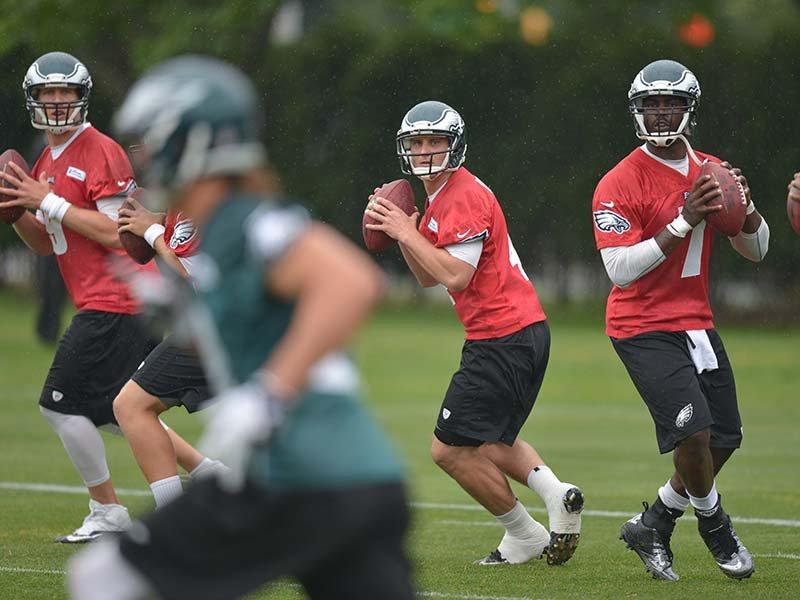 Eagles Pro Bowl left tackle Jason Peters wasn’t at practice today and head coach Chip Kelly told us that he knows why and it didn’t have anything to do with an injury.  “We know where he is, and we know what’s going on,” said Kelly, who let us know that he expected the Pro Bowler to be back soon.

The absence of Peters produced an opportunity for number one draft pick offensive tackle Lane Johnson.  He practiced with the number one offense. “I just came out here today and went out with the ones,” said Johnson. “I didn’t really have too much to think about it. I just went out there and played.”

Eagles safety Kenny Phillips was kept out of practice for precautionary reasons, but it wasn’t anything serious.  We were all thinking about his knee.

It was raining throughout the Eagles practice this morning and it didn’t help the offense.  There were far too many balls on the ground after plays.

With Andy Reid, the Eagles took their practices inside the bubble, but Kelly kept the team outside in the rain.  “I think football’s played outside”, Kelly said in explaining why he kept the team outside. “Last time I checked, [Lincoln Financial Field] doesn’t have a dome. It rained a little bit. I know it may have been a little inconvenient for you guys, and I do apologize for that, but I think we had a practice. It wasn’t like we had a hurricane or anything like that.”

“We just need to get a lot accomplished. We don’t have a big indoor facility, so there are a lot of things. You can’t practice special teams like that, so if we can be outside, we’re going to be outside. We have to play outside. We have to get used to it,” Kelly said. “I know you’ve got to practice in it if you’re going to play in it. We’ve always felt that; unless it’s just so bad that you can’t be productive. But we had some guys slipping and sliding a little bit. They have to learn to stay on their feet in those situations, so we felt it was good working outside today.”

Michael Vick began the 7-on-7 workout by staring down a throw down the middle of the field.  Safety Nate Allen broke on the ball and should have had an interception.  Vick’s practice was up and down.  Vick put a deep pass into the lap of wide receiver Riley Cooper, but he dropped the ball.

Matt Barkley had a ball picked off and should have had more intercepted.  He tried to make a couple of throws outside and he let them go late.  In the NFL you can’t make a late throw to the outside and not run the risk of getting it picked off.  Barkley is probably the most accurate quarterback on the roster in the short to intermediate throws.

“You have to make a really important decision,” Kelly said in response to a question about why he doesn’t name a starter at the quarterback position . “Why should we jump to conclusions? Why do we need to name a starting quarterback in May?”

“Right now we haven’t done a thing in front of officials,” he said. “We haven’t done anything except we’ve had three days of voluntary minicamp before the draft, and today was our seventh OTA. So none of us have had any thoughts of, ‘Hey, we’ve got to get a guy named by a certain point in time.’ It will play itself out.

“It will play itself out over the course of time when we’ve had an opportunity to make a thorough evaluation. It is a big decision. When you make a big decision, you have to take your time and let it play itself out on the field. So we’re not looking at it like that. They rotate on a daily basis. Billy will tell you who will play in each group and they’ll just go out and play.”

In a month of practices, the Eagles wide receivers have spent more time working on blocking drills than they did through more than a decade under Andy Reid.

The rainy weather didn’t chase Eagles owner Jeffrey Lurie inside.  He was out there on the field for the practice.

Notes From The Phillies’ 9-3 Loss To Boston

Notes From The Phillies’ 3-1 Win Over Boston

I read that during 7 on 7s, when there are no real d-linemen, Kelly has position coaches drag out big cut-out D-linemen and stand there with them.

And Vick doinked a ball off one of them, which is kinda funny….though predictable.

Eagles OG Danny Watkins is currently behind journeyman Allen Barbre on the depth chart.
With LG Evan Mathis recovering from ankle surgery, Watkins had a chance to prove he belongs on the roster as a backup. Instead, Barbre has been taking all of the first-team reps in Mathis’ absence. The former first-round pick is long past bust status, and is a candidate for release.
Source: CSN Philly
May 28 – 9:46 PM

I think if Vince Young was still on the roster that he would be the opening day starter.

Ummm…he’s just sitting out there. If they thought he could contribute they could just pick up the phone. (And wouldn’t that be a complete train wreck in every way. Even I would take Vick over that disaster.)

I forgot to insert *sarcasm* sometimes when I type I expect others to know when im being a jackass.

sorry, others on here are always typing absolutely ridiculous statements that they actually believe, and sometimes I have a hard time distinguishing between them…..

Heard the Eagles are in bringing in QB JeMarcus Russell for a look..

The quarterback issue is a concern but the defense is what worries me!!!

This is the kind of thing that happens when you leave players to their own devices regardless of what they are getting paid. They should expect a lot more unexcused absences as it gets hotter. Hopefully next year they’ll be back in the dorms at Lehigh.

It also doesn’t help to build the cohesion necessary by not keeping the players together 24 hours a day 7 days a week at least for summer camp.