Notes From The Phillies’ 4-3 Win Over Boston 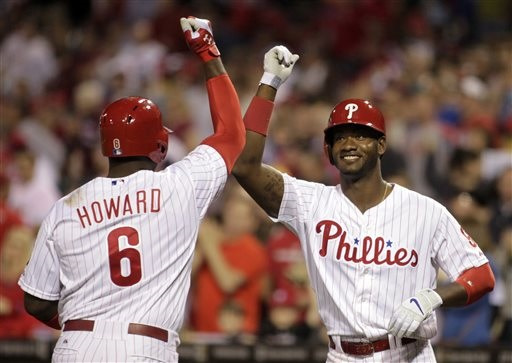 The Philadelphia Phillies won their second straight game on Wednesday night, taking down the Boston Red Sox 4-3. Their record improves to 26-27.

It’s good to see Kyle Kendrick shake off his two rough starts and return to the form he’d shown for most of his first 10 starts of the season. The Boston lineup is certainly nothing to sneeze at, and it was impressive to see Kendrick keep them in check.

It’s even better to see Domonic Brown continue to come into his own. He just keeps hitting the ball out of the yard, and he’s the only guy in that lineup whose getting it done right now. Can we think about batting him higher than sixth, Charlie?

What Direction Will Sam Hinkie Take The Sixers?

After getting yoyo d the last 2 -3 years and mismanaged Dom has finally been given a chance to show his aaa numbers and spring training numbers were no fluke. Nice to see him have some success and even better to see him progressing every game/week/month…. He is a reason to watch this team

He is the MVP of the Team thus far, no doubt… with Papelbon representing the Pitching Staff.. The Fact that this Phillie Offense has been anemic all season and to be only 5-6 Games out by June is very fortunate.. If the Phils can get their Bats going collectively (as they usually do come SUmmer weather) they can hang right in there.. They need to go on one of winning streaks or win 9 out of 12 Game stretches to boost their Confidence and get them pumped for the Summer

atlanta and washington are nothing to be scared of especially atlanta with all those k’s in their outfield. justin uptons hrs will slow down a bit but his average and ks will remain the course. only question with this team is will freeman continue and will uggla get hot?

btw ill take dom brown over any outfielder in atlanta

lmfao at bj upton batting 146 with 62ks, him and his brother have as many or more ks than howard.

fuck atlanta and that overrated outfield.

It’s the Braves IF that is really good (Freeman,Uggla,Singleton & Johnson) which is superior to the Phils as far as Production and Batting go..

paul, uggla who does hit hr but he hasn’t hit above .230 the last 2 years and is currently hitting 161…. makes $13M– if he was in philly he would be crucified! and their SS and 3B are hitting .240—Freeman is their only good IF. phils IF is hitting .260 as a unti with 19 hr… not where we want to be but as for ATL being superior… the facts don’t bare that out!

When I look at IF Comparioson

2B – D Uggla Batting ,186 with 10 HR’s and 20 RBI and a stiff in the field, An edge to Phils when Utley is playing
, but Uggla when playing the Phils plays extremely well for some reason

SS – A Simmons Batting .249, 5 HR’s 19 RBI’s, excellent fielder with a lots of upside and is only 23 Years Old, Future All-Star in the making as he fills out and matures .. Even right now with Rollins

Braves have Freeman,Simmons & Johnson as a core group of IF for the next several Seasons and are
3B – Chris Johnson Batting 3.46 3 HR’s and 14 RBI’s another solid Fielder who at 28 Years old is just hitting his prime and was a throw in with the Upton Deal from Diamondbacks.. Big Edge over Mike Young

Braves IF Core are all Young (Freeman,Simmons & Johnson) and have more upside and will improve, Edge to Braves not only in 2013 but for the foreseeable future

funny all the nitwits that were pissing and moaning about bj upton and ‘RAJ ‘not getting this great $15 million FA’– i say this.. .168!!! oh and if you say its still early– his career numbers are like 18-20 HR and 70 RBI a year– the same nitwits were critical of another FA the phils signed that average 24, 87 and .264– I still think there is a run in the phils– they have been brutal but as has been pointed out under charlie i think they have the best second half record in baseball

My only problem is what we have now… We got scraps now but at least they aren’t 100 million dogs.

I’d like to see Phils go after top dogs this offseason ie cano, choo (who I really wanted the Phils to trade for last year) and/or elsbury. Cano won’t go anywhere but the other two should / could be in play.

the phils will have some flexibility after this year for sure– if we end up with an IF of galvis, asche and hernandez we are going to need a big bat in the OF– looks like DB is one but we need a bopper for sure…

jimmy will be here next year. im thinking we see asche replace young & galvis man 2nd and give ceasar another year

you said the ‘braves infield is really good and i don’t see it… very good 1B and below average everywhere else– to say they are currently even at SS is assinine– he may be a player in future but to say ‘really good’ about the current infield… wow
and i’d love to hear what you’d whine about if the phils had dan uggla at $13m– when he’s on the braves you say he is a good player.

braves are dominating imo because of gattis 32 rbis and 12 hrs filled in for mccann and now in the of. he has dominated the minors so i see him as the braves legit future and the reason why they will let mccann walk

im pretty sure ceasar, asche & galvis could all play as good in the if as these braves and all hit 240 but the phils dont put in young guys that hit 240…

Any Free-Agent OF out there this off-Season who are in there Primes??

the problem is that teams are securing their good young players by signing them to longer term deals even when they are arbitration eligible– its the new way they do business so guys don’t get to free agency till they are in their 30’s– phils did it with rollins, utley and howard– a little bit with cole but cole held out because he knew a left w/ a ws mvp was going to command huge dollars. the nats will be/are doing it now as is the braves…. then you make a run with your core– thats the business of it
look at the recent FA signings and what a disaster they will end up being….

There were a lot of people questioning Dominic Brown…for the ones that still are you can expect to have that sour grapes taste in your mouth for a long time to come.

i questioned him last year mostly because of how awkward he was in the field, im just watching now. im not on board and tooting his horn as a future star like so many did with heyward in atlanta but im getting cautiously optimistic because of his track record and because management is no longer jerking him around.

i think it is fair to question brown in the past and currently he didnt prove anything yet, but for the people who have said and who do say he sucks and will suck yea some sour grapes for sure

people on here like to go negative early– its their MO– they also don’t understand just how tough a game it is at that level– brown had some real growing pains on a team that was missing its two best hitters– look at how pence was when he had to be the main man– people are on howard and his SO.. they forget the number of huge homers and huge rbi’s he has had– and will still have — everyone knows his numbers go thru the roof in july, aug, sept…