Notes From The Phillies’ 9-2 Loss To Boston 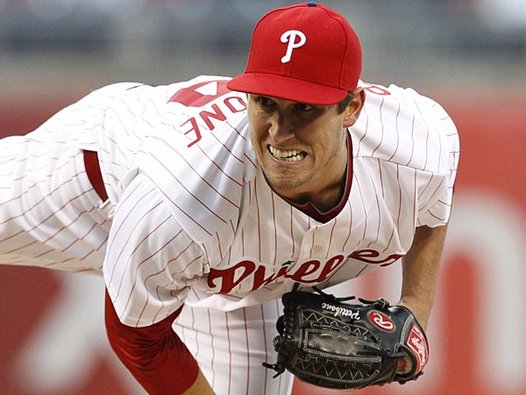 The Philadelphia Phillies had their two-game winning streak snapped on Thursday night, falling 9-2 to the Red Sox. Their record drops to 26-28.

Even though it wasn’t a statistically successful outing, I really liked what I saw from Jonathan Pettibone tonight.

After allowing Boston to score four runs right off the bat, it looked like it could be a long night for Pettibone (and the bullpen). But instead, the rookie managed to keep his head up and work his way through four additional scoreless innings, holding a powerful lineup in check and keeping his team in the game.

Pettibone has been an excellent surprise for the team ever since being called up from the minor leagues. He’s showing more and more that he belongs in the majors. In his eight starts, this was the first time that he allowed more than three runs, and he was still able to impress on some level.

Unfortunately Pettibone’s teammates were unable to do anything to help him out. The bats were silent after the first inning, and the bullpen came along and put the game out reach.

Eagles Lane Johnson Excited About Getting Chance With First Teamers

Notes From The Phillies’ 8-5 Loss To Milwaukee

Why is Durbin & Horst still on this Roster.. Bring up some young
Arms to replace these 2 immeadiately, they both have been terrible all Season

paul, you should ask our fearless leader, Ruin 2morrow, that exact question.

14-2 not once but twice ? Recheck the final score

No mention that elsbury had 5 stolen bases? Embarrassing on behalf of the catcher. Phils really have no choice but to reup chooch or sign McCann this offseason

McCann still has those problems/issues with his Eyesight and other nagging issues.. I am not sure he is a long-term answer for Catcher

he is not a long term answer nor is chooch but both would be good stop gaps most likely until joseph, valle or rupp are ready. joseph wont be ready for minimum of 2 years

fixed! i got the 14 from Boston’s hit total for the night haha my fault

I read and hear a lot of fans wanting galvis to get a starting job by next year and I just pray our organization doesn’t want the same. I see Wilson Valdez in him with better defensive skills and a worse bat.

Hernandez and galvis are your future middle infielders, like it or not, the phillies are high on these two, particularly Hernandez, per Todd zoellecki

im cautiously high on hernandez too. galvis blows and is a utility bench infielder

hernandez seems to hit line drives– obviously its a small sample size but the few swings i’ve seen he seems to square it up nice– good speed too. if galvis is our SS be prepared for a 240 hitter with minimal power… lots of teams make due with that kind of SS– we just aren’t used to it.

Phillies released RHP Chad Durbin.
It’s not a surprise, given his 7.80 ERA and 2.00 WHIP in 15 appearances this season. Durbin was pretty good last year, though, and shouldn’t have trouble catching on elsewhere. He just might have to settle for a minor league deal. May 31 – 2:17 PM