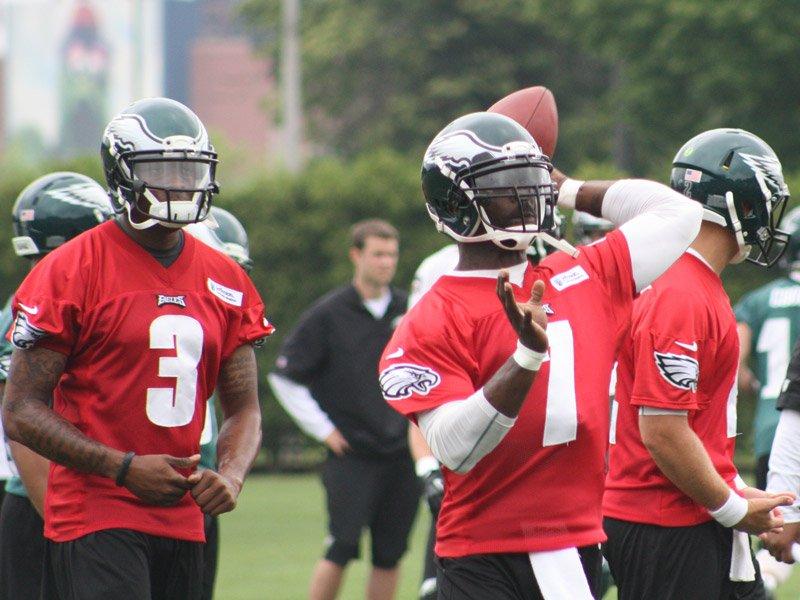 The Eagles got in a lot of work yesterday on the read option.  They worked on individual segments with the quarterbacks, running backs and offensive line getting in quite a bit of work.  When they got to the team period, which involved everybody except the kickers and punters, Michael Vick, Nick Foles, Matt Barkley and Dennis Dixon all took their turns running plays which included the read option concept.

On one play, Vick got the entire defense to bite on a faked handoff, then he blazed through a huge hole on the right side for what would have been a big gain.  Chip Kelly saw it.  Pat Shurmur saw it.  The rest of the team saw it.

Vick seemed to be angling for the starting job yesterday because he played a conservative quarterback as a passer, by checking the ball down a great deal.  The former number one pick in the draft knows if he stays away from turnovers, he will be the starter.  He took a number of shots down the field and made some nice throws, but for the most part, he took the check down and stayed away from turnovers.

Foles and Barkley were taking more shots down field for the most part and at times they paid for it with near interceptions .

To me this quarterback competition is very simple.  Vick’s ability to run gives him a major advantage in this quarterback battle because Kelly is a believer in the read option.  He has talked at length about how important it is that the quarterback is a run threat.  The threat of the quarterback running can be used to occupy one or more of the defensive players.

Many times you will see players come from the backside of a play and make the tackle because there’s nobody assigned to block them.  Kelly believes in occupying as many players as possible and one way to do it is with the quarterback being a run threat.

Nearly every time one of the Eagles quarterbacks hands the ball off with a sweep look going to the left or right, he takes off the other way to force the backside defender to keep put and that prevents him from pursuing to that side and it also opens up the cutback hole for the running back.

Imagine how much you’re going to fear Vick running with the ball as compared to Foles and Barkley.  It’s not even close.  That’s the advantage which Vick holds in this competition.

This doesn’t mean he holds onto the job, but I think he’ll be the guy who starts the season.

Yesterday at the start of the 7-on-7, Vick made a throw across the middle to wide receiver Jeremy Maclin that was a thing of beauty.  Maclin was running a crossing route and it was against a zone.  Vick hit Maclin in the middle of the Birds linebackers. There’s only one quarterback on the Eagles roster, who has a strong enough arm to make the throw.

Vick also threw a 35-yard lazer to wide receiver Aurelius Benn as he rolled out to his left.  Again there’s only one quarterback on the roster who could have made the throw.

Remember Kelly saying that he was keeping Vick because of his “skill set”.  Yesterday we saw Vick’s “skill set” at work.

Notes From The Phillies’ 7-3 Win Over Miami

Cary Williams Has His Say About Missed Workouts