Notes From The Phillies’ 4-3 Loss To Minnesota 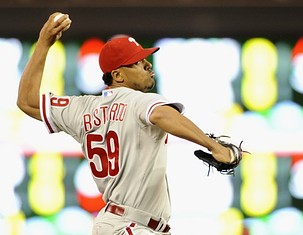 The Philadelphia Phillies lost their fifth straight game on Wednesday night, falling to the Twins 4-3. Their record drops to 31-35.

All of the ground that the Phillies made with their five-game winning streak has officially been undone. Their current five-game losing streak has destroyed whatever momentum they had gained, and now has the team in a terrible funk.

Charlie Manuel just doesn’t have a lot to work with on this roster. He’s got a lineup that’s missing a couple of key pieces (Chase Utley, Carlos Ruiz), and he’s getting very little offensive production from anyone not named Domonic Brown. Ryan Howard continues to struggle, with just one home run and six RBIs in his last 20 games.

He’s also got a bullpen that continues to disappoint. Mike Adams’ injury and ineffectiveness forced Manuel to go back to Antonio Bastardo for the eighth inning last night, and the lefty just imploded. It was the second straight day that the team had seen a game lost in the eighth inning because of their bullpen.

Chip Kelly Shouldn’t Give Into Players On QB Decision

I know Manuel doesn’t have a lot to work with. But he uses the same basic approach to managing mature stars and immature call-ups – you get to stay in the game until you blow up.

With pitchers, this is devastating. Why was Bastardo left in so long? Why can’t these guys see that a pitcher doesn’t have it and yank him or just send in a pitcher for one or two batters based on matchups? The formula is the formula – 8th inning goes to the 8th inning guy, period…. until he blows up.

I understand that this builds loyalty and admiration from the players. I guess we can cheer for that evident admiration when we’re at the games, because that’s about all there is.

If the guy is this formulaic in handling pitchers, you don’t need him (nor the pitching coach).

Lol how do these gms & managers make millions and aren’t smart enough to sit galvis??? It amazes me they put this bum out there every night while the future Caesar Hernandez just watches. I

Could you imagine if the phillies had Bryce Harper ? He would be in single A. I just don’t get it. Utley is gone and its crystal clear Caesar is your future
At 2b and he is riding the pine rather than learning. He should be playing on the Phils everyday or mike Martinez should be up and Caesar should be playing every day at Aaa. Fuckin morons

Yup! The next genius move will be to trade for some 37 year old second baseman.

I wonder how much influence Manuel has. His shtick only works with older, mature players. If the GM makes these moves to keep that bumbling backwood bubblehead content, I’d hit the roof – but I wouldn’t be surprised.

Nice Phils called up another gas can. I think they should move the smoking section further away from the bullpen for safety issues at the stadium.

Phillies recalled LHP Jacob Diekman from Triple-A Lehigh Valley.
Tyler Cloyd was sent down in a corresponding roster move. Diekman had a 5.70 ERA and 37/24 K/BB ratio over 30 innings this season in Triple-A and will pitch in middle relief.