Notes From The Phillies’ 8-0 Loss To New York 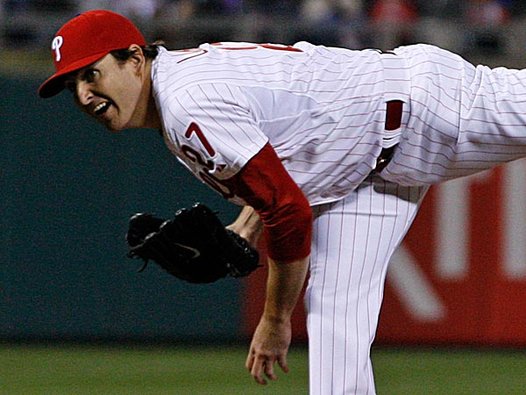 The Philadelphia Phillies lost the finale of their series with the Mets on Sunday afternoon, falling 8-0. Their record drops to 36-40.

What a miserable end to a frustrating homestand.

The Phillies really let a great opportunity for some easy victories slip away. Dropping two of three to a team like the Mets is a joke. What does a series like this say about the character of this team? Back in Spring Training, we heard a lot about how the veterans of the Phillies were upset that they were being counted out by many experts. They supposedly had a pretty big chip on their shoulders, and were determined to fight and prove those writers wrong. They’ve had too many games like today where it just looks like the offense doesn’t even try. They’ve had too many winnable games slip away to bad teams. There’s no way that most of the guys on this team can claim to have any kind of chips on their shoulders.

I really don’t like the way Charlie Manuel has put together his lineup since Chase Utley returned. Jimmy Rollins should not be leading off, and Michael Young should not be hitting out of the three-hole. I thought Jimmy was doing just fine batting third. He looks comfortable there, and his abilities as a switch hitter still allow Manuel to break up the lefties (Utley, Howard, Brown) in the order. Michael Young is not a fit at all for that position. He doesn’t hit for nearly enough power, and he hits into too many double-plays.

Either Young or Ben Revere should be in the lead-off spot. Both players have handled the role well lately. They’ve been able to get on base, and set the table for the rest of the order. Ever since Manuel has gone back to his more “traditonal” lineup with Rollins first and Young third, the offense has really looked bad.

Notes From The Phillies’ 8-7 Win Over New York

Rumor on the streets is that Phillies Ownership will sell the Team to A Consortium down in Charlotte who will relocate the Team there, then the Oakland A’s will relocate back to
Philadelphia where they belong.. I support these moves a 100% ..

We are bad, but you can’t have them. I don’t want Billy Beane’s “Money ball”. We already have winkie dinkie do with the 70 Stinkers.

I would trade the Rocky Statue and the potentially the Liberty Bell to have Billy Beane as the Phils GM.

bugs, maybe you’re right. Billy Beane’s out-of-the-box thinking, in a big market, that actually spends $$$$, might be a great fit.

Dude. Someone, anyone who has a plan and actually knows about baseball.

Did you see Franco tearing it up at Reading. I know that it is only 4 games but I can dream can’t I. Dude keeps raking and maybe Asche doesn’t even get to play 3B for the big club next year.

bugs, I said it a few times, they should switch Asche back FT to 2B, & both Franco & he should be here next year, from day 1. Asche, probably can play now, but should be switched to 2B (ala Utley). He doesn’t have the power, RBI #’s, for 3B. He could be the next Utley?? Franco isn’t ready yet. After the roster expansions & trade deadline, maybe?
I still want Lee- Texas 3B Olt, + 2 other prospects.
Crapelbon (stole from you XD) & Nix- Detroit 3B/OF Nick Castellanos, Closer Bruce Rondon, LHRP Matt Hoffman.

Can Cesar play SS if you move Asche to 2B? Thinking after J-Roll is gone.

Wondering if Crapelbon is playing his way out of a trade?

Cesar has played 2B only, & at this time, looks to be a BU. Texas messed up Olt, bringing him up & down, switching him to 2B/OF/DH, the end of last year & this year. He is still considered their top prospect, with Profar, & both are blocked by All-Stars, Beltre & Elvis Andrus. Olt instantly upgrades this team. Hits for power, x-base hits to all fields, & is a good 3B. I’d trade everybody, if we could get Castellanos, Profar, Olt, & Stanton. Stanton & Profar, are unlikely, but Castellanos, & Olt are given, if they want Lee & Crapelbon.

Just a question, can this possibly be the worst 2-3 year period, for all 4 franchises at the same time? Considering the payrolls, $$$$ these players are being paid, fan expectations, media overrating & overhyping them, I have to say yes, & it ain’t getting any better, anytime soon! The M.I.A. NBA team, is a blackhole, & are irrelevant! The Birds, are at the minimum, 2 years away from doing anything! The Phillies are a lost cause, need to be purged with an enema, & unless Ruin 2morrow, his staff, & his inept talent evaluators are gone, we are 3-5 years away! The Flyers are run by X talentless Goons & an Owner with dementia, who still thinks it’s the 1970’s. I have never been more pessimistic, than I am right now, & that’s saying alot! Hopefully, the upper Managements & Ownerships wise up soon, or it’s going to be a long 2-5 years!

I think that I would agree DCAR. I think that Charlie and Lavs will probably lose their jobs too, so all of the coaches will have been replaced within 2 years. None of the teams have a direction and the GMs are really bad. The only wild card is the Eagles right now, but they still seem to be far away.

The Eagles ain’t no WC! They’re as far away than anyone. IMHO, this is who I think can be fixed the fastest-
1- Flyers (Solid, young, nucleus).
2- Birds (Only because, the rebuild has started).
3- Phils (Have to be purged).
4- The NBA team, that shall stay un-named.
The problem is, the 1st 3 teams, are run by inept, overmatched, front offices, & blindly loyal, ownerships! Who gives a rats @$$ anymore, about the irrelevant team, that shall stay un-named! They won’t sucker me, into wasting a $, ever again. 30 years of diarrhea, trash truck juice & afterbirth, is enough for me! I’d be happy, if they contracted & expunged the team. 3 days till the draft, we still don’t have a coach, we have a bean counting dork as a GM, no clue of what their off-season plans, nor interests are, & an entire organization, that has gone into the witness protection, for 5+ weeks! It’s an absolute disgrace, embarrassment, & frustration, to be a Philly 4 fan right now!

The Early 70’s were Rouoght too DCar,
The Flyers were improving but the Eagles, Phils and 76ers were among the worst Franchises in each of their Repsective Sports/Leagues..

Eagles with Owner Len Tose
1st Round Picks of QB John Reeves or remember QB Mike Boroyla…
HC Joe Kuharick… Geez.. they were terrible.. Only Tim Rossovich and Safety Bill Bradley were fun to watch on those Teams.. (WR Ben Hawkins too)

Phils were terrible too.. a Young great Pitcher in Steve Carlton where he Won 27 Games in ’72 or ’73 while the Team won about 60 the entire Season
Willie Montanez was my favorite player at the Time

76ers had a 9-63 Won-Lost Record inb .’72 and had the worst winning % of any NBA Franchise for years and years which I think the Charlotte Bobcats just broke or tied 2 years ago… 1st Round Pick Jim Spanarkel… Woo Hoo..

The early 70’s were worst than now in my opinion for the Teams had little Talent, no expectiations, poor Ownership/Front Offices and were a joke for the most part but the Recent Underperforming of Philly Teams is probably more bothersome to me since they do have talent, do have very high-payrolls, have high epectations which they have failed to meet..

Jon Heyman of CBS Sports hears that the Phillies are much more likely to trade infielders Chase Utley and Michael Young than pitchers Cliff Lee and Jonathan Papelbon.
“It’s our job to win, and these are guys who are hard to replace,” Phillies GM Ruben Amaro told Heyman over the phone when asked directly about moving Lee and Papelbon. Utley, 34, is scheduled to become a free agent after the 2013 season. Young, 36, is in the same boat.
Related: Jonathan Papelbon, Michael Young, Cliff Lee
Source: CBS Sports
Jun 24 – 1:20 PM

Problem with this thinking is you arent going to get much of a return on Mike Young or Chase Utley. Age, declining production, injuries and neither are under club control next year…

That’s why this stupid MOFO POS, needs to be fired! He better be smoke screening everyone, because if he thinks this team can rebuild around Lee & Crapelbon, or he can get any significant pieces without trading them, he needs to be put away! The Youngs are worthless! Ruiz is nothing without PED’s (8th hitter his entire career for a reason)! Utley, if he doesn’t get hurt again, MIGHT, get us a top 10 prospect! Howard is untradeable & immovable! Rollins, IF, he excepts a trade, could get us a couple of 10-20 prospects! Kendrick, could get us a return, but needs to stay! So, we have no choice trading Lee, Crapelbon, Rollins, & Utley. FA, is sparse the next 2 years, & we don’t have much of MLB prospects ready, the next 2 years. Hernandez? Is a BU. Asche? Has got the power numbers to be a 3B & needs to be switched permanently, back to 2B. Franco? Going to be a stud, all around 3B, is being fast tracked, but isn’t ready. Joseph? He’s a poor man’s Posey, but a concussion has hampered his progression. Rupp? Might be ready next year. Robles? Has good BP potential. Pettibone? Hopefully keeps improving. Morgan? Would have been called up before Pettibone, but got hurt. Martin? Has great stuff, but has control & meatball issues. Biddle? At the earliest, next years roster expansion. Quinn? Is a string bean & is 3 years away. Tocci? Is a skinnier than Quinn & ???? We gotta make trades! Wholesale! Not band-aids, & stopgaps.

I think you try to trade chase, both youngs, and pappelbon. pappelbon from everything i hear from my boston friends is a bad teammate/locker room guy and a me first guy. phillies dont need that or his side show. i think him and detroit are a match made in heaven.