Notes From The Phillies’ 6-2 Win Over San Diego 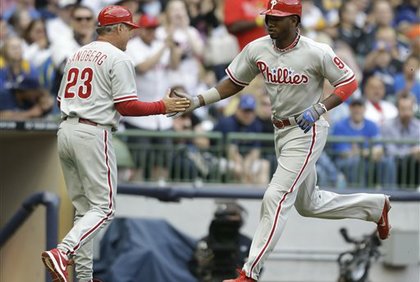 The Philadelphia Phillies snapped their two-game losing streak on Tuesday night, taking down the Padres 6-2. Their record improves to 37-41.

Its good to see Dom Brown breakout and make a strong contribution again. When Brown is at his best this season, the offense seems to click much more naturally. He’d been struggling over the last two weeks, and had become almost a non-factor save for a couple of nice moments here and there. If the Phillies are to somehow survive and keep themselves relevant, they need Brown to be special.

It’s a shame that this team just can’t be counted on to find any kind of consistency. We’ve seen a lot of games like this one where they actually look like a competent major league team. The starting pitching is solid and the lineup, while not the most dynamic, is capable of being decent when they aren’t going up to the plate with a free-swinging mentality.

The reality is that you never know which team is going to show up every night. This team could give you a solid 6-2 win behind a strong pitching effort and a well-rounded offensive performance. And they could just easily come back the next two games and be held to three hits by some team’s fifth starter with an ERA in the 5.00’s.

The Next Ten Days and Flyers Goaltending

Notes From The Phillies’ 7-5 Win Over San Diego

Mike Adams has 3 tears in his shoulder, & had to get a 2nd opinion to find this out. Who the f^#@ is running the medical staff down there, Ray Charles! WTF!!!! The Phillies said, they did their due diligence on Adams, & his health history, & believed he was worth signing. But anyone with a f^#@ing brain new how major of an operation it was, that he was coming off of, & at his age, he was inevitably going to have other surrounding issues. But not Ruin 2morrow! 2 years $12M, for a 34 year old damaged goods. Stupid SOB!!!! Do they even own Xray & MRI machines down at that complex? They waste their $$$$ on everything else!

The 2008 Team Salary you have to keep relative
Rollins, Utley & Howard’s had not received their current long-term Deals which at that time, these players were younger and in their Primes with what everyone thought would be Top Players for 4-5 Years..
Then when you add Pitchers like Doc,Lee, Papelbon and extend Hamels,
There’s another $50 Million in Salaries..
The lesson is not to give long-term deals to anyone (3 Year max)
And not 4-5-6 Year Deals like the Phils did

It’s the market premium players don’t sign for short term deals. It’s unfortunate but a guy doesn’t get to free agency usually till they are 30 or so and then they sign a 5-10 year deal. Puljos is hitting 258, can’t play 1B and has 7 years and 200 million left. Salaries escalate when you try to stay competitive. Players are breaking down all over the place. But you have to take the shot I guess

The Smart Teams Stay away from Long-Term Deals as much as possible (Giants,Cardinals,Rangers,Oakland etc,etc) You can’t avoid it all together but the biggest problem with the Phils is that they have had too many Players tied up with long-deals which impedes the ability to make any Trades..
(Rollins,Utley,Howard and the Big 3 PItchers) are 1/4th of the 25 Man Roster but account for $100-$110 Million of their Salary Cap which is crazy when you think about it … This is a big reason why Teams like the Phils, Angels, Dodgers are underachieving and have a shaky future for mis-allocating their Resources..
The Problem is

Zito 7 years a bunch of money, posey 9 years, Cain 8 years. Teams make an effort to keep their players, it’s less risky than free agency and they try to wipe out the last year or two of arbitration that was the deal with Howard, I think posey and Cain were in a similar boat.
Of course they got their second WS … If only!
Rollins only makes 11 I don’t think lumping him with the 20 something’s is accurate

Edit, carpenter done after this year

Pman- just stop with your thoughts about giving deals out. Noone is going to sign a 2 or 3 year deal. The phillies did what they had to t stay competitive. If they would have let Howard walk they would have been slammed for it… rightfully so. They gave it their all… it didnt work out. Remember the year you cried that they would barely be above.500? They won over 100 games. Let it go.

Oh and Pman was high on signing Loshe for 36 mill for three years , he is like 35

Okay men,tonight, first batter, jroll, leading off, , against a pitcher in his second mlb start, left hander, what’d you think this arrogant, dumbass Rollins does, pops out,

“The Phillies face tough deadline choices, writes Ken Rosenthal of FOX Sports. Team CEO David Montgomery sounds like he’s inclined to keep Cliff Lee, but also says that he’s willing to listen on anything. Montgomery also conceded that the fans’ attachment to the club’s core veterans factors into their unwillingness to part with them.”
WTF fans is Montgomery talking to? Not according to the many polls, radio stations, newspapers & blogs! What a clueless, inept buffoon! Thus the reason, Ruin 2morrow still is employed! OYE VEY!

I think the only players that have “fan attachments” are Chase, Jimmy and Cliff Lee. The general consensus from the fan base I think, is that the rest can go kick rocks. Especially Ryan Howard.

I understand the attachment for Jimmy and Lee but fans being attached to Chase cmon you havent been able to count on him or produce for 5 years now. times up