Notes From The Phillies’ 7-5 Win Over San Diego 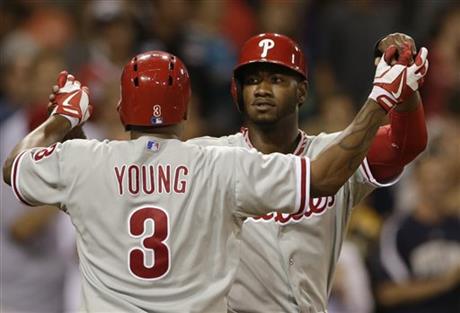 The Philadelphia Phillies won their second straight game on Wednesday night, taking down Padres 7-5 in 13 innings. Their record improves to 38-41.

The young, inexperienced arms of the bullpen really came through on Wednesday.

If you told me that the Phillies would need seven scoreless innings from the bullpen, (including four from extra innings) in order to win this game, I would have instantly bet against them. Yet somehow, the likes of J.C. Ramirez (who had an ERA of 6.53 at Triple-A before joining the team), Phillippe Aumont (who has talent, but lacks confidence), Jake Diekman (throws hard, but is still pretty raw), and Joe Savery (who hasn’t shown anything to convince anyone that he’s a major league reliever) were able to get the job done.

Its good to see the young arms all go out and have some success with a game on the line. Each of these guys can benefit from an outing like this.

Offensively, Domonic Brown didn’t drive in any runs, but he still played a critical role in the team’s win by reaching base three times and coming around to score three runs. As I said in yesterday’s “Notes From”, the Phillies need to Brown to be an active regular contributor in order for them to keep themselves in the mix.

Also, Carlos Ruiz is beginning to swing his bat effectively. Ruiz reached base three times in four at-bats, and had a multi-hit game for the second time in three games. He’s gotten at least one hit in six of his seven games since returning from the disabled list.

Notes From The Phillies’ 6-2 Win Over San Diego

If I were pitching coach, I would tell the youmg gud ‘Throw strikes, stick it up their ass, and don’t worry about nothin”…

No doubt that most of us expected the Phillies to sell off pieces between now and next month’s trade deadline, but it looks like Ruben Amaro Jr. is going all in. That’s the only logical conclusion I can come to after the Phillies announced this afternoon that they’ve traded for journeyman infielder John McDonald. I like this move for a few reasons:

1) By acquiring an aging veteran who can’t hit, Amaro won’t change the dynamic of the roster. I think it’s important for the Phillies to continue to not only get older, but also worse at the same time. McDonald should fit in nicely here because if there’s one thing this team needs it’s gotta be more age.

2) If there’s another thing the Phillies need it’s probably a light-hitting infielder. McDonald, who is considered by many baseball writers as one of the game’s good guys, will bring an .053 average loaded with professionalism and grit with him to Philadelphia. I see his .601 career OPS and an OBP that hasn’t been over .300 since 2005, and, I gotta tell you, that’s something I want to be a part of.

3) He’s crafty and resilient. McDonald, who is actually considered to be a well above average defender, has bounced from Arizona to Pittsburgh to Cleveland to Philadelphia since the beginning of this calendar year. That this many teams would take him on despite his complete absence of offensive ability must really say something.

In all seriousness, this move makes pretty much so sense. McDonald will join the team tomorrow and the guess is that somebody is on their way out of town. I guess.

LMMFBO!!!! mh, best post you ever posted. Galvis is going to AAA.

It’s a good thing the Phillies won last night so I can write the following about Cole Hamels because it’s true, not because it’s born out of the frustration of another numbing loss.

Not only is the guy the whom the Phillies invested their long-term future in last summer pitching like a bitch, he’s also acting like one again. The sympathy and excuses given to Hamels during his early season struggles are quickly evaporating, and rightfully so. Ask me three months ago, I would have told you the guy who showed up with a mustache launching hot dogs into the stands was about to win a Cy Young. Now the guy looks completely lost.

While win-loss isn’t the most accurate way to gauge a pitcher’s season, guys don’t just trip into a major league leading 11 losses before the calendar gets to July. It’s true princess’ teammates haven’t exactly lit up the scoreboard for him this season, but Hamels has pissed away plenty of opportunities on his own, too.

Of the 29 pitchers in baseball who have thrown at least 100 innings this season, Hamels’ 4.58 ERA is the highest. He’s been the losing pitcher of a game in which he was spotted a four-run lead (Kansas City), and two games in which he was given a three-run lead (Brewers, Mets).

And then there was last night’s horseshit performance where not only did Hamels blow another early lead and fail to pitch at least seven innings for the 12th time in 17 starts, there he was acting all cunty in the dugout after Delmon Young bobbled a game-tying single in the third inning. Forget that Young is a terrible human being and even worse baseball player. Young, fully aware of defensive incompetence, went over to apologize to Hamels, who shrugged him off. Total dick move.

Wonder if he acknowledged him after he saved his ass from another loss with a two-run homer in the 8th inning? Reminds me of 2009 when Hamels menstruated all over the mound every fifth day, giving up home runs, and stomping around the mound like he possessed a labia.

This guy is a fucking mess right now. And after three full months of this, whatever this is, it almost seems impossible, but you have to start wondering if this is ever going to turn around.