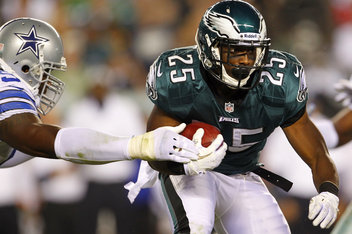 I recall the days where drafting running-backs consumed 20 of the first 24 fantasy selections.  Now these were the days where the names of Alexander, Tomilson, Westbrook, Portis, Johnson, Taylor, Martin, Lewis, and Davis led the charge.  When only a pair of quarterbacks, a trio of receivers and never a tight-end were selected in the first two rounds of a standard, 12 team snake-style draft.  It’s a passing league, running-backs split carries, and often times it’s a coin flip with which back or even if it’s going to be the quarterback rushing it in from inside the five yard line.  With that said, running backs are still going to get their share of touches, and overall, I see the elite and studs being thinner than I can recall in recent years.  The scoring settings for my running backs still reward more for actual rushing yards, and I feel a full point per reception is too much, so I have the settings in my leagues at .5

1.   A. Peterson– Won’t repeat what he did last year, but he is a beast, and runs like a man possessed.

2.   A. Foster-Already shelved due to injury, but will be just fine?  Strong runner, soft hands, td machine.

4.  M. Lynch– All he needs is the pigskin and skittles.  Primary focal point even with addition of Harvin.

6.  C. J. Spiller– Elite speed and can catch.  F-Jax will eat into carries, poor qb at center will crowd box.

7.  L. McCoy– O-Line will be better.  Eagles will run more.  How often will Brown be rotated in the mix?

8.  J. Charles– Will not increase rushing yards, but bigger role in passing game with Big Red in town.

9.  A. Morris– A freak out of nowhere his rookie campaign.  Success depends on health of RG3.

11. T. Richardson– Injury Risk and a weak supporting cast.  I’ll pass on him, but love the dreadlocks.

12. F. Gore- No Crabtree, risk of Kaepernick in pistol set, wider lanes for Gore to glide through.

14.  S.  Ridley– Will his value hold true minus Welker,  chances of Gronk and Hernandez missing time?

16. M. Jones-Drew-Still the main guy; but will the long rehab slow down his once elite speed?

17. R. Bush-Lions won’t pound the rock.  Bush will be second target through the air behind Megatron.

19.  D. Wilson-Show’s speed to create big play, but will split carries with backfield mate A. Brown.

20.  D. Murray-Flashes of dominance in 2011, but injuries have plagued a full season worth of output.

21.  D. Sproles-A jack of all trades, will produce better points in ppr leagues.

24. M. Ball-Broncos will score, but the coach hasn’t trusted rookies in the past.  This year different?

27. C. Ivory-The Jets are a mess, but their O-Line is actually decent.  Will get enough touches to produce.

28. L. Miller– Leading candidate for workload in Miami.  Nice upside and improved weapons around him.

29. A. Bradshaw-Always an injury risk, but the guy is extremely tough.  Flex option with nice upside.

30. E. Lacy– Drafted higher than other rookie by the Packers.  Will Green Bay commit more to the run?

31.  A. Brown-Gets the goal-line touches, and showed he can carry the workload when given the chance.

34.  D. Williams-Remember this guy?  With Newton/Tolbert for the goal-line, he is merely a flex option.

35. B. Pierce-Reports are he will see more touches, I agree Baltimore will rush more than recent years.

36. B. Brown-Chip is going to run, rotate his players.  If Brown has solved the fumbles woes, watch out.

37. F. Jackson-Spiller won’t get all the carries.  Jackson has had some serious injuries last few seasons.

39. J. Stewart-Like Williams, use to be a guy to draft.  Steward always hurt, more of a reception back.

40.  G. Bernard-Rookie with big time speed and a nice change-up from North-South style of BJE.

40. R. Williams-Would have been the go to go in ARI, but Mendy now in the mix.  Bench spot for now.

41. M. Bush-Big back, good for half dozen touchdowns.  Limited  starts unless injury to Forte.

42. M. LeShore– Nice 2012 season for where he was drafted.  With Reggie in town, production to suffer.

44. J. Franklin-He could end up with more carries in Green Bay, but for now his role is questionable.

45.  J. Forsett-With MJD coming back from an injury, he could start, at worse see decent action.

46. R. Hillman-Will end up giving way to Ball, but Hillman can catch the ball and will see some carries.

49. R. Turbin-Lynch clearly the guy, Russell and even Harvin will get rushing attempts.

50.  S. Greene-His role with Tenn is a mystery.  Limited with skillset, but should see 150 touches.

Notes From The Phillies’ 6-4 Loss To Los Angeles

Was The Holiday Trade The Right Move For The Sixers?