Notes From The Phillies’ 6-1 Loss To Los Angeles 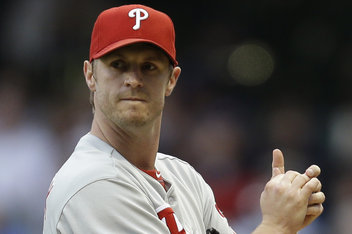 The Philadelphia Phillies lost their second straight game on Sunday, falling to the Dodgers 6-1. Their record drops to 39-44.

The trade deadline is fast approaching, and the Phillies seem more and more likely to become sellers.

They just can’t get themselves to or above the .500 mark. For the last few weeks they’ve been stuck between three or five games below .500.

There’s no energy on this team right now. Cliff Lee is the only guy that has consistently performed at a top level all year, and he can only perform once every five days. Chase Utley and Ryan Howard just don’t have any explosiveness anymore. The bullpen turned out to be a major disappointment. Cole Hamels has given the club next to nothing.

On a typical night with this team, all you see is uninspired baseball. This is the type of play we’ve seen for several years now. It’s about to time to break this thing up.