Questions Abound On The Defensive Side Of The Ball 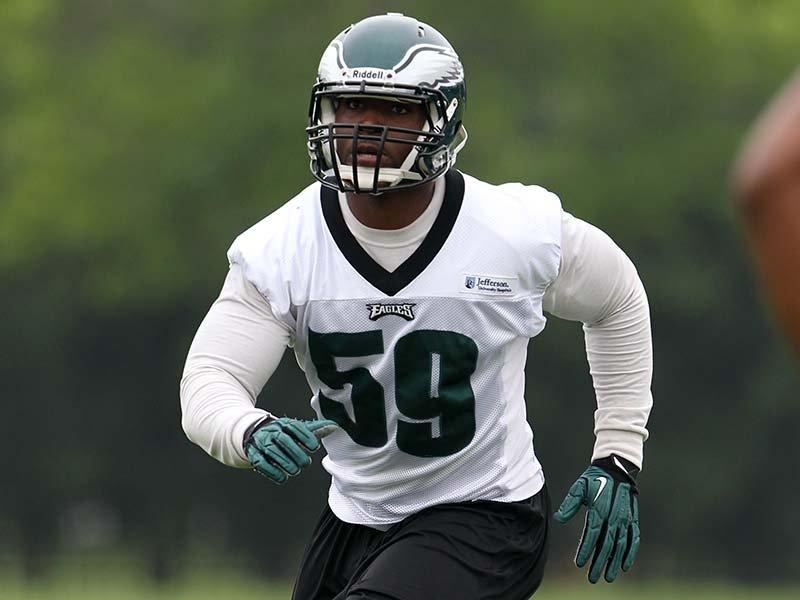 We have no idea what this year’s Eagles defense will look like.  No longer will they be playing a 4-3 defense, this time around it will be a 3-4 hybrid, which is a 4-3 under alignment with 3-4 personnel, which means they’ll have three defensive linemen and four linebackers.

A new defensive coordinator, Billy Davis, will be in charge and quite a few new defensive players will be wearing the midnight green.

Second-year defensive tackle Fletcher Cox should be their best defensive lineman and I hope they make him a three-technique defensive tackle, lining up on the outside shoulder of the right or left guard.  If they line him up in that spot, he should have a big season and spend a lot of time in the opposing offense’s backfield.  It will be difficult for teams to double-team him in this position.

We’re going to find out if he is the big time player, they think they drafted.  I think this kid is the real deal. Decent goals for Cox would be six or seven sacks, a bevy of quarterback hurries and a few forced fumbles, along with some All-Pro mentions.

I don’t see any other possible stars on the defensive line, but they need a number of the defensive linemen to step up to be steady and dependable.  The leading candidates are veterans Isaac Sopoaga, Antonio Dixon and Clifton Geathers, along with rookies Bennie Logan, Joe Kruger and David King.  They need these big fellas to be solid against the run, while occasionally registering a sack or pressure on and off.

Linebacker Connor Barwin will be featured in this defense.  They’ll be lining him up all over the place. We need to find out whether he is a linebacker, who will pressure the quarterback with 11.5 sacks like he did in 2011.  Or is he really a coverage linebacker, who will struggle getting to the quarterback like he did in 2012 while notching just three sacks.  He looks like a good match up for tight ends, but remember he was brought here to put pressure on quarterbacks.

Barwin will be starting at the left outside linebacker spot, but there’s no telling who will be starting at the right outside linebacker.  Veteran Trent Cole was starting their during camp, but Brandon Graham and Phillip Hunt will have get a shot at the job.  I know they’ll be asked to drop in pass coverage, but that will only be 10% to 15% of the time, on the rest of the pass plays they will be rushing the passer.  The guy who can get to the passer, will be the starter.

Cole has to prove he’s got something left in the tank.  Graham played half the plays Cole did in 2012, but nearly doubled him in sacks 5.5. to three.  The outside linebackers are the top pass rushers in the 3-4 defensive alignment, so they need two players with double digit sacks from this group of outside linebackers.

DeMeco Ryans was the most consistent defensive player for the Birds in 2012 and he will hopefully have a better year in 2013 with more big plays.  They need him to come down with a few more interceptions, while causing more fumbles as well.  Another part of his job will be overseeing the maturation of second-year linebacker Mychal Kendricks.

I got the chance to talk to Kendricks and I liked what I heard and saw during the OTA’s.  He’s starting to sense plays before they happen.  This is a must if you’re going to be a good NFL linebacker.  He’s got to be a playmaker for the Eagles defense and I think he’s on the way to being that.  They need big plays, forced fumbles and interceptions, out of him, plus they’re planning on turning him loose more often as a blitzer.

Cary Williams has better size than speed and is likely to get beaten a number of times for big plays, but he’s going to play with the attitude which Eagles fans love.  He’s a fighter.  On the other side, they’re going to more of the same from Brandon Fletcher.  He seems to be a better athlete than Williams and more technically sound, but everybody gets beaten sometimes in the NFL.

Brandon Boykin is likely to continue to start at the nickel spot.  I would like to see him really push for one of the starting cornerback positions.  He’s really a better athlete than either of the starting corners, but his lack of size makes it quite a challenge for him.  The fourth cornerback is likely to be rookie Jordan Poyer.  He missed just about all of the OTA’s and mini camp because of his school’s late graduation date.

The Eagles starting safety positions remain up for grabs.  Patrick Chung is likely to be out there with some combination of Nate Allen, Kurt Coleman or rookie Earl Wolff.  Wolff is going to be given a good shot at the job.  He can come up and support the run, but can the rookie handle the speed of the receivers in today’s pass happy NFL.  I don’t know whether Kenny Phillips’ knee will ever allow him to be a consistent starter.

This defense isn’t going to be great in its first year, but they can play hard and smart and not give away points like the 2012 Eagles defense did.

Obvious story with 11 days till camp….WAyyyyyy too many questions on defense. I don’t see it gelling till mid october early November at best. SO…the offense needs to score if we have a chance.

A real Struggle I see..
No True DE’s in the 3-4 Base Package ..
Playing Kendricks on the ILB when he should be a OLB
Safety Postion up in the Air.. I believe we will see Nate Allen and Eric Wolff as the Starters the last half of the Season.. I fear that Kenny Phillps may not even make the Roster if he can’t practice and participate on a daily basis and with his knee-swelling issues, and multiple surgeries, it may just be time for him to hang it up even though he’s still only 28 Yeasr old.. Patrick Chung to me is strictly a back-up and a Special Teamer and is very poor in Pass Coverages.. He plays well down in the Box so against a Physical Run first Team, and maybe can have him out there against Run-First Teams which there aren’t many left in the NFL..and with the NFL being a Pass-Happy League now, Chung to me is strictly a back-up in case of injury… I like both CB’s B Fletcher & C Williams but there will be a learning adjustment, they are sound fundamentally, play hard and play Physcial which the Eagles CB’s haven’t done the past 4-5 Seasons so to me, this is an improvement…
Boynkin I am not sold on, he’s a little too small, and get’s lost in the slot amongst the bigger Players playing in the middle of the field.. Can he play out on the outside remains to be seen, I wouldn’t mind seeing take some reps as a Scat-Back WR/RB and maybe be that elusive 3rd Down RB out of the Backfield and since I see D-Jax gone after 2013, maybe Boykin can have a small package of plays with the Offense ..
This is last chance for Curtis Marsh to show that he belongs in the NFL, can he step up and battle for some Playing time..I do like the Prospects on Jordan Poyer who I had rated as the 5th Best Overall Cover-CB but has some baggage, and off-the field issues which knocked him out from being Drafted which is a big Fall.. How he repsonds will be critical to his chances of making the Roster but I think he can develop into a solid Slot CB by 2014
LB’s are still a mess — Graham,Cole,Hunt are not LB’s
Kendricks belongs on the Outside, Ryans is limited in pass Coverages
and Chaney,J Phillips,Matthews just don’t excite me
I do like youngsters C McCoy from Canada and E Acho from the Cleveland Browns potential and think they will get lots of opportunities to stand out in Camp and move up the Depth Charts..

Bottom Line – DC Davis will play as many as 20 of the 25 Players on the Roster from the Defensive side of the ball throughout a Game shuttling in Players along the DL/LB and changing up the Safeties based on Down & Distance, their Opponenets tendancies and of course, the Score of the game and.. so there will be plenty of Opportunities for Players to get an opportunity to make plays and get noticed and help contribute to the overall success of the Team..
I do not see any Players with Double-Digit Sacks for they just don’t have that kind of Athlete playing OLB which is the key Sack Producers in the 3-4 Scheme but I do see 4-5 Players who can get about 6-8 Sacks a piece
(Barwin,Kendricks,Graham & Curry)
I do not envision Trent Cole making the 53 Man Roster and believe he will be traded by mid-camp for a 6th Round Pick for a Team needing a pure 4-3 Pass Rusher (Falcons, Panthers or Vikings all come to mind)

AT DT I Soapaga as Starter with A Dixon as Back-up, Draft Pick Logan as 3rd String

Trevard Lindley is really just a body. He will be cut eventually. He flat out sucks. So Marsh will surpass him, if he already hasn’t, and if he really is a player.

Lindley is showing to be 2nd opn Depth Chart at CB so far..
Howie Roseman just loves this kid for some reason.. He does have potential to be a decent Slot CB which I think is his best fit..
A big Camp for both Boynkin and Marsh to see if they belong in the NFL
I think Boykin has potential, but on the Outside and not the Slot where he jsut gets lost in traffic.. Let him play outside and give him an area of the Field to cover and I think he could do very well ..