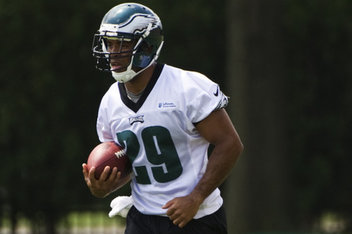 I got the chance to sit down and talk to former Eagles great safety Brian Dawkins a couple weeks ago at the NFL Rookie Symposium and he talked about Nate Allen.  Dawkins said he believes Allen is the most talented of the Birds safeties, but he’s not sure whether he will ever live up to that talent.

“He’s got good size and when he’s healthy, he’s got good to great speed for a safety”, Dawkins said.  I like his foot quickness and ability to change directions.  Nate has it all ability-wise to be a very good safety in the league.”

“He’s got to regain his confidence”. Dawkins said again and again.  “He lost his confidence when he was injured the last couple of years and he’s got to get that back.the Eagles”.

I agreed whole heartedly with Dawkins comments about Allen.  Nate is never going to be a big hitter, but he can be a ball hawk.  As a tackler, he just needs to approach ball carriers confidently, then wrap them up and get them to the ground.  Allen picked off quite a few passes during the camps, so he may be ready to live up to what Dawk was talking about.  Dawkins came to a number of the Birds workouts in the month of June.

Chip Kelly Comes Clean About Why He Kept Michael Vick Around

As projected coming out of College.. Nate Allen would be much better in a Tamp cover 2 Scheme where he plays more of a centerfielder for pass coverages..
He has poor Tackling techniques as he puts his head down much too often and loses his target and therefore takes bad angles or misses his target
He needs to square his shoulders and take a lower position on opponents when tackling and drive thru his target.. He attempts to tackle Pilates up way too high and gets carried down the field and slips off all together..
If he would keep his head up more, square his shoulders and take a lower position in tackling, he would be a pretty good Safety
These were my notes on Nate Allen when prepping for the Draft 3 years ago when the Eagkes Selected him.. He has much to improve on but gas the physical tools to do so, his mental toughness and psyche is another story and must come from within if he wants to become a Good Safety in the NFL..

***NFL News & Rumors****
With the impending indictments to be charges to Cleveland Browns Owner Haslam with a price fixing scheme in his fuel/truck stops empire
It had been rumored that Eagkes Owner Jeff Lurie is going to sell the Eagles to
A group headed up by Don Smolenski, Ron Jaworski, Dick Vermiel and other’s
Jeff Lurie will then become the Owner of the Cleveland Browns and reunite with Joe Banner… You heard it here first…

Don’t see this happening. Sure, I’m sure he misses Joe’s warm and fuzzy personality (who doesn’t?), but this is incredibly far-fetched even for you.

Don’t get me wrong, I’d welcome the change, but can’t see it happening.

***More NFL News***
Owner of Jacksonville Jaguars (Khan) purchases a Premier Soccer Club in London to further indicate his and the NFL’s plans to relocate the Jaguars
Franchise in London by the Year 2017..

I just can’t wait for everything to start next week to be honest I never wanted Reid to leave if I was Jeff Laurie I would’ve got rid of all the bad seeds on the team and told Reid to hire spaggs as Dc my fear is now all the picks we had the last couple our draft picks will be a waste curry ,graham ,Kendrick’s , cox cause they don’t fit a 3-4 they can tell me cox can play in any scheme but I know he would play much better in a 4-3 I just don’t want our picks to be a waste and desean might be out of here to cause Kelly already said he likes big players and I don’t see how desean fits in that but I was just a Reid got that’s just me hell I would’ve never got rid of Donovan I think if he was on the team the last 2years we would’ve been in the playoffs cause as much as everybody else hated don he didn’t turn the ball over and Vick does to damn much. And drc should still be here cause Cary Williams is better suited for a cover 2 scheme he is to slow cant play man to man he just sucks and he gets to many penaltys on the field also because he can’t cover call me crazy but I would start marsh over him just to see what he can do cause Im honest with myself I don’t see the eagles going anywhere this year unless foles is the qb cause Vick has to many turnovers and the d is gonna be learning on the fly Patrick Chung is nothing more than a special team guy and back up safety it should be earl Wolff and Nate Allen the corners should be Brandon Boykin and marsh and fletcher should be in the slot I know what people are gonna say Boykin is to small but outside of the Seahawks what team in the league has big corners look it up that should be there secondary and if I was in charge I would trade desean and Jason peters and cole cause they need all the draft picks they can get to help there D out for the next few years and if Percy harvin can bring you a 1,3,6 desean should be able to bring the same look at there stats they don’t lie damn near the same desean is a little bit better though there 5wr should be maclin ,djohnson , Benn , cooper and that 6-6 guy