Report: Jeremy Maclin Has A Torn ACL, Done For The Season 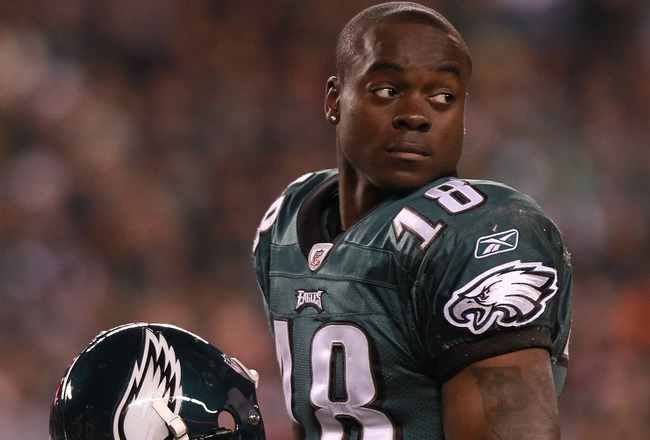 According to Geoff Mosher of CSNPhilly.com, Eagles wide receiver Jeremy Maclin has suffered a torn ACL, and will miss the entire 2013 season.

Maclin was carted off of the practice field with a leg injury earlier today.

Maclin’s injury is a serious blow to this offense. The remaining receivers on the roster will be hard-pressed to replace what the fourth-year man brought to the table. Guys like Riley Cooper, Damaris Johnson, Arrelious Benn, and Ifeanyi Momah will now be in competition to start opposite of DeSean Jackson. Jason Avant also seems much more likely to make the team, although he’s primarily a slot receiver.

The former first-round pick was in the final year of his rookie contract, and this injury puts his future with the Eagles in serious doubt.

Notes From The Phillies’ 10-0 Loss To Detroit

Sheesh. He was our best receiver in my opinion.

Sad for Maclin, especially in a contract year. I thought he was going to have a strong season. Somebody will get him cheap next year.

This is just sad. I feel bad for the shit that happens to this team sometimes. Not to say this is a critical blow to the point where it ruins our season, but were all really about to find out how good Desean Jackson really is along with the rest of this receiver corp. Word on the street is that Damaris J is having an amazing camp in his sophomore season. Me personally I am really excited to see Riley Cooper get more snaps and chances. I think he can be a breakout player, especially in the redzone considering he is the biggest receiver the Birds have besides that 6’8 guy.
This offense is still going to be a top 5 this season.. James Casey and Zach Eartz along with Celek should have Chip licking his chops. Watch out for Chris Polk this season, who will have a monster breakout year. I think he’s better than Bryce Brown.

Laurent Robinson is out there as well as Brandon Lloyd and Austin Collie. laurent robinson is 28 runs a 4.38 had some decent games as a Cowboy but was over shadowed in a crowded WR corp with Bryant and Miles Austin. Went to Jacksonville is pretty much the same situation as Dallas with Blackmon and Shorts.

Brandon Lloyd is 32. Never was a speedy guy but is a sure handed play maker. At his age I would stay away.

Austin Collie is interesting. 27 years old but can never stay healthy. Very good route runner and has been productive when he played. He is willing to sign a injury-liability waiver so the Eagles would not be locked into keeping him. I think Collie is the best available WR on the market.

no to laurent robinson, hes coming off a torn acl, and mcl…..

My prayers go out to Jeremy Maclin, and wish him a speedy recovery.

A Baseball thought. You cant tell me in the whole Phillies farm system their isn’t a better option then Raul Valdes. 8-0 in 2nd inning. Are you kidding me? Its like batting practice.

Wow major blow for the offense, well hopefully some of these young receivers can step up.

the majority of injuries at the vet were to the other team . now we have this fine complex and WE seem to be getting all the injuries !

Not a Maclin fan, think he is soft but Im sitting at my computer thinking “oh shit”, we are one concussion, broken rib, twisted ankle to DJax away from sending out Riley Cooper, Avant and D Johnson as our receivers. That may be the worst receiving corp in the NFL. Compared to Cruz, Nicks, Bryant, Garcon, Austinin our division this team would be in serious trouble. Our receivers wouldn’t scare anyone. It is imperative that one of them big receivers we have turns out to be a player. I could be like the old saying you don’t miss something until its gone.

Even without Maclin, there are worst WR corps out there. Like the Pats. Hell Tom Brady would probably make D. Johnson and Cooper catch 80 balls each. I think the Redskins, Chargers, Steelers, Browns all are worst and Im sure there are more.

Chip will use the TEs a lot like NE does. Ertz will probably line up as a WR as well. I don’t see Lloyd coming here. Rmbr Chip is boys will Bellichick and he wants nothing to do wth Lloyd.

Like others on here, I wasn’t a big Maclin fan. It just seemed like every time he got touched in a game he would leave the field. He is fragile and I never expected him to say healthy this year anyways (his fragility is one of the reasons he didn’t get his ext before this injury/same thing with Nicks). I hope he recovers to 100% tho. ACLs are not a death sentence anymore in todays NFL. He will get the best medical treatment/Dr he could ask for. At least it wasn’t an achilles tear

You know I have never been a Maclin fan, but I have to say that he was a threat. Me personally I thought he was soft as hell. But if the D didn’t account for him, he would make them pay. He has been our most productive receiver, scoring touchdown’s the past few years. So we shall see what the Eagles do, maybe one of the young bucks can step up. If not then like Denny and Gm said let’s give T.O. a call. Okay everybody let’s go you know it I know it everybody know it’s. On three one, two, three. T O T O T O T O T O T O. LOL

Eff TO. I would rather have Robinson or Collie and their injuries than him.

Bugs if you take Robinson and Collie numbers and combine them together. They still don’t match TO’s production. Now I haven’t checked to make sure but I bet he probably has better numbers than the two combined. But the eagles would never go there to sign Terrell back anyway, it’s just for fun mentioning him.

Was better but not now. Now he is a washed up has been who could have been a hall of farmer if he wasn’t such an idiot.

Shame to hear about as Maclin appears to be snake-bite about remaining healthy to play a Full Season.. And wish him well in his recovery and rehab..
I satiated that Naclin was going the free-agency route after this season anyways but never want to see any player go out like those
On the positive , at least this injury has occurred very early in Camp and manyPlayers will have an opportunity to step up and get noticed BJ Cunningham, Salas, Sheppard & Momah..
Let’s see what they can do for I believe that Kelly will gave 5-6 Receivers (including the TE’s and not really rely on 1-2 WR’s to have 80 Receptions..
They will spread the ball and 5-6 Receivers with 25-40 Receptions each which is not a bad thing..

Better him than DJax, but I think his future with the birds isn’t in jeopardy. One thing about this is kind of funny, because I know Chip Kelly wants to get rid of Ron Johnson but Johnson may very well outshine the other receivers at that outside spot.