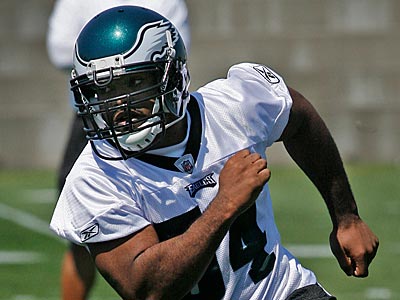 One of the most important moves of this training camp is the transformation of a number of former Eagles defensive ends to outside linebackers.  This is needed for the Birds to be able to change from a 4-3 defensive front into a 3-4 defensive alignment.  They need Trent Cole, Brandon Graham and Phillip Hunt to become effective outside linebackers.

So far in this training camp, Graham and Hunt have been impressive in the transition, but veteran Cole hasn’t been nearly as effective.

Cole hasn’t been able to cover any of the tight ends during the one-on-one battles in pass coverage.  He’s been a step or two late in every battle, whether the receiver is going inside or outside.  Even more importantly than his attempts in pass coverage, Cole hasn’t been able to get to the quarterback in the pass rush drills.  Last year Cole was able to come down with only three quarterback sacks, so this is going to be a big preseason for him because he’s got to prove to Chip Kelly and company that he can still get to the quarterback.

Graham was starting to come into his own last year when he registered 5.5 quarterback sacks in only 220 quarterback snaps, which is an amazing stat.

During yesterday’s practice, number 55 came off the ball like a blur during the one-on-one pass rush drills and went by number one draft pick Lane Johnson on his way to the quarterback.  He looks quicker at 260 pounds.  The former Michigan Wolverine came inside one time on his pass rush and outside around the corner on the other.  Both times he reached the quarterback.

In the one-on-one pass coverage drills yesterday, Graham stood out by running with a couple of the tight ends.

It’s still early in the process and today the Birds will put on the pads for the first time, so we’ll get the chance to see how Cole, Graham and Hunt will play with the all the equipment on them.

I also like what I’ve seen of Chris McCoy, who was signed by the Birds in the off season as a free agent.  McCoy is a very good athlete, with great size and speed.  He’s been impressive as a blitzer and coverage linebacker, so far in the workouts.

Notes From The Phillies’ 10-0 Loss To Detroit

Notes From The Phillies’ 12-4 Loss To Detroit