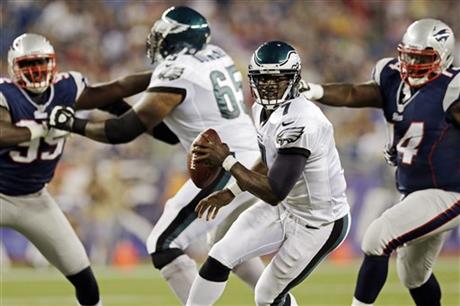 As Chip Kelly tries to determine who his quarterback will be for opening day, Michael Vick made about as strong of a statement as he could to win the job.

Vick put on a great performance tonight, finishing 4-5 for 94 yards and a touchdown. He made quick, decisive, effective decisions and delivered some smooth strikes with his passes.

On the Eagles’ first third down, Vick hit Jason Avant in stride for a 22-yard gain. Vick was protected well on the play and did a good job delivering the ball quickly. On the next play, Vick found DeSean Jackson for a 47-yard touchdown strike. Once again, Vick delivered a perfect pass, putting the right amount of touch on the ball while also delivering it quickly. On the team’s second drive, Vick rolled out after a play-action fake and found a wide open Riley Cooper for 19 yards.

Vick was on point tonight, and he looked great. There was no hesitation, no mistakes, no turnovers.

Foles Stays In The Race

Nick Foles’ night didn’t start as well, but he had some impressive moments that kept the . On his first drive, Foles caused a turnover by fumbling the ball away. The second-year quarterback was pressured on the play and tried to throw the ball away to avoid the sack. However, the ball came out of his hands before he could throw it forward. In that situation, Foles is better off taking the sack. The pressure of the rush got to him, forcing him into an uncomfortable position and he made a mistake.

Foles ran Kelly’s offense at very fast pace on his second possession. Foles delivered a nice quick throw to Bryce Brown on third down. Foles reacted well to the pressure, and had a quick strike to his running back to keep the drive alive. On the next play, Foles found Jason Avant for another first down. The quarterback then ran for a first down, and connected with Brown again to keep the chains moving. He made another precise throw to Avant to get the ball down to 8-yard line. It was a 10-play, 66-yard drive for the second year man that ended in a touchdown run for Bryce Brown. The offense had a great, quick pace during this drive.

Foles didn’t have quite as strong a performance as Vick, but he showed some important qualities tonight that will help keep him in the mix.

Tom Brady and the Patriots made quick work of the Eagles, and Billy Davis was unable to so much as slow them down.

On the first possession, the Patriots ran the ball right down the Eagles’ throats. Stevan Ridley took off for a 62-yard gain on the first play from scrimmage, and the team scored a touchdown five plays later. On the second possession, the Patriots put the ball in Brady’s hands and he had no trouble picking the defense apart. Brady went 7-8 for 65 yards and a touchdown on the drive.

The defense looked just as soft as they were last season. There were missed tackles, blown coverages, and no fight or intensity. On the first two possessions, New England totaled 160 yards and two touchdowns, running just 16 plays in only

Brady and his offense moved the ball at will, and they could have scored however they liked. The Patriots only began to slow down once Brady and the starters took their leave and gave way to Ryan Mallet and the B-team. The second team defense had their issues too, as they gave a miserable effort on a 51-yard touchdown run by LaGarrette Blount. Blount, who is not exactly the fastest guy you’ll ever see, effortlessly cut back and made his way to the endzone.

Ridley and Blount combined for 191 yards and three touchdowns on just 19 carries. Preseason or not, that’s simply inexcusable and it may very well be a sad sign of things to come.

Its only preseason, but the way the defense played tonight was very reminiscent of the game last season against the Atlanta Falcons where it was simply no contest. This defense has a lot of issues that they’re going to have to work through.

Even though both Michael Vick and Nick Foles looked good tonight, its important to keep it all in perspective.

Stiffer challenges remain for both quarterbacks. What we saw tonight was a very limited sample of what both individuals are capable of. We saw them both operating at a good level tonight, but both guys have their flaws which will be exposed in due time. Praise both quarterbacks for their effectiveness tonight, but don’t go overboard.

I think Vick was the more impressive of the two quarterbacks tonight, and he’s on his way to winning the job. Foles played very well on his second drive, and there’s still some time for him to catch up, but this is clearly Vick’s job to lose.

We got our first look at what Chip Kelly’s offense could bring to the table, and it looked pretty good. The offense was fast paced and efficient. The unit looked organized, and the first, second, and third teams all enjoyed some degree of success.

Notes From The Phillies’ 9-2 Loss To Washington

Michael Vick and Nick Foles Play Well, But Eagles Fall To The Pats