In A Good Move, Eagles Use Clay Harbor At Wide Receiver 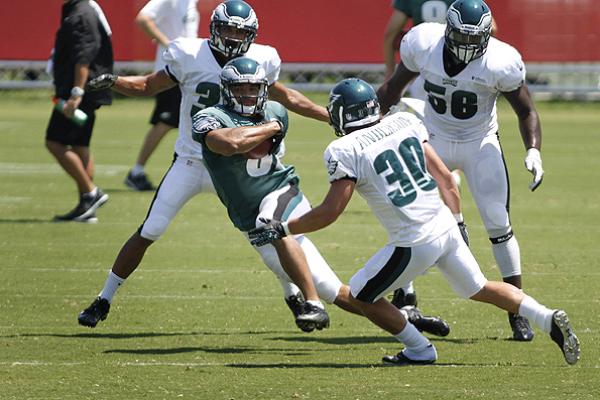 In what I think is a great move, the Eagles had tight end Clay Harbor take some snaps at the wide receiver position.  I’ve seen steady improvement from Harbor for the last couple of years.  He’s gotten faster and more fluid in his routes.

He was dropping passes last year before the season, since them he has been catching passes after practice everyday from the jug machine with Jason Avant and Kurt Coleman.  Harbor’s hands have gotten better.  I’ve seen improvement from him and I think they need to find a way to get him on the field.

They’re going to be playing multi-tight end formations and using Harbor wide receiver in certain situations makes sense.  It’s going to create matchup problems for the defense.  Unlike the Andy Reid-led teams, which struggled in the red zone, I think Chip Kelly’s team is going to be formidable with a good running game and a multitude of pass catching tight ends.

“We’ve got seven tight ends, and he already knows how to play inside because all the tight ends know how to play the slot,” coach Chip Kelly told members of the local media.  “He had three big catches for us Friday night.  He’s probably the fastest of the tight ends.  Until, really, there’s some cut downs and there’s some guys available, we think that the best route for us is the guys we have.”

At some time during this preseason, you’re going to see Harbor playing some wide receiver.

“So if we can cross-train Clay a little bit and get him to play outside receiver now — we believe he knows how to play inside and understands all our route concepts — so it’s just a matter of the more versatile you can be the better impact you can make,” Kelly said.

Cary Williams Should Shut Up And Practice

I think this is a good creative move too! Reid would never try this I don’t believe. What d back is going to be able to out muscle harbor, no linebacker will be able to cosistently cover him and he will create matchup problems for safeties as well.

I see Clay in a non-racist Riley Cooper role.

I think I just mentioned this (Harbor to play some WR & Slot)
In an earlier Post to take advantage of his athleticism, natch up problems and blocking ability down the field and especially with the Depth at TE and the
Thin WR Corp the Eagles currently have experience wise..
Good move for the Eagkes and for Harbor..

Paulman bet me $10 that chase wouldn’t sign for more than $10 million a year with the loser sending the proceeds to the charity of the winners choice. Then 2 hours after chase signed for $27 million over 2 years said that he was not paying and basically said fuck you to cancer and Children charities.
And for that you are a classless, poor, piece of shit lowlife Squelchers who has no integrity. I truely feel bad for every single parent, teacher, sibling and family member who had a hand in raising such an asshole. You should change your name from Paulman to Paulscumbag as you certainly have no manly qualities.
I would love nothing more then to spit in your face in real life, but since I cant the above will be my spit all day every day.

Paulman cured both my children of cancer, how dare you say these things!

There needs to be some type of psychological evaluation done here before people are given access to post……I doubt that I would pass the test either, but there are some damn crazy people out there who have WAY too much free time.

Paulman- Do you think Harbor could play some # 2 wideout opposite of Jackson or would he be more of a 3 or 4?

Paulscums an idiot harbor isn’t playing wr. Paulscum is just a goof who throws shit at the wall and steals from charity

Eagles,
I don’t believe Harbor is suited to play as an outside WR (#2 Opposite of D-Hax) due to his lack of explosiveness/pure speed, but I do think he can come in motion a lot, line up in the Slot and even come out of the Backfield to create mid-matches and gain momentum for once he gets moving, humid Soeed is pretty good, he just doesn’t have that quick first 2-3 Steps that’s you need pkaying out on the Outside..
Move him around, send in motion and spread him out I think utilizes his best skills and versatility to contribute..

he ran 4.58 on his proday and id bet he can run 4.4s now .. faster than riley cooper and jason avant

I hope to see Harbor utilized in the wr capacity Thursday against the panthers. It’ll be an interesting strategy to watch develop.

If Kelly is looking for mismatches then a 250lb dude running a 4.5 fits.

Absolutely. He is fast enough to play WR given his size.

Definitely a good move and shows Reid’s degeneration… He would regularly line L.J Smith and/or Chad Lewis up on the outside during camp, but never commented on it and never executed it during the regular season. Even though Kelly’s not committed to to it he’s talking about it to reporters which means it might happen. I think Harbor will work out well on a lot of the WR routes.

Imagine a smurf like Boykin lining up on him.

Clay Harbor probably would have beat out James Casey if not for the stupid guarantee contract Howie gave him ————– did any of Howie’s big free agent moves look good on Friday?( Chung looked the best but still was well below average on the field ) I’m not liking any of Roseman’s 2013 free agent moves so far maybe Cary Williams will prove something when he finally takes the field.

It will be interesting to see what the newly acquired Jeff Maehl can contribute by Thursday.