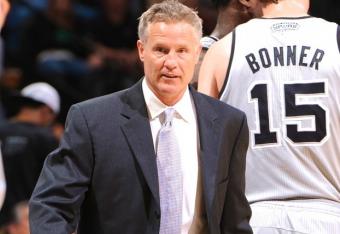 Yes, this is not a typo, though I usually have a few in my post. Brett Brown has been hired as the Sixers head coach. I believe if I am counting right, this will be the third time he has been hired. The Sixers have finally got the man that they wanted all along.  Brett Brown is set to become the 8th coach in 10 years (since Larry Brown left in 2003) for your team, your town, and your 76ers. Brown agreed to a four-year deal with the Sixers, according to the SI.com report. Yes, I believe it’s actually official now. We all remember that report that came out on Draft Night that the Sixers were ready to name Brown the head coach.  Hinkie squashed that rather quickly. He said that he wanted to go through the interview process first with other candidates. I can’t believe there were a lot of them, but hey, its still NBA head coaching job at the end of the day.

Of course there was another curve ball mixed in.  Reports came out at the end of  last week that some of Browns peers urged him not to take the job. Of course they did. I can’t really say I blame them either. Brown is highly respected around the NBA; he could have easily gotten another job next year, when something else opened up.  If the Sixers weren’t  going to give Brown enough money and job security to prove that they really wanted him, Brown would’ve likely said, “Nah, I’m good”.  I am guessing (of course I am), that Brown wanted nothing to do with being a transitional coach. All seriousness, who in the world would? The Sixers must have really wanted Brown and must have GUARANTEED those 4 years.

Brown has been with the Spurs since July 2002 and moved to the bench as an assistant coach before the start of the 2006-07 season.  Before his time with the Spurs, Brown coached 14 seasons (9 as HC) in the Australasia National Basketball League. Brown actually coached Australia in the 2012 Olympics. He led them to a seventh-place finish. One of the best things about Brown, other than sitting next to “Pop” all these years, he has spent almost a decade as the leader of player development for Spurs.  Oh yeah, they have won three championships in that time period.

Some have crowned Brown the savior already. I find that quite amusing, but hey, he did work for “Pop” so that’s always a good thing.  To be honest, I would have been happy with anyone on that Spurs staff. Why? Two words- Gregg Popovich. Me happy.