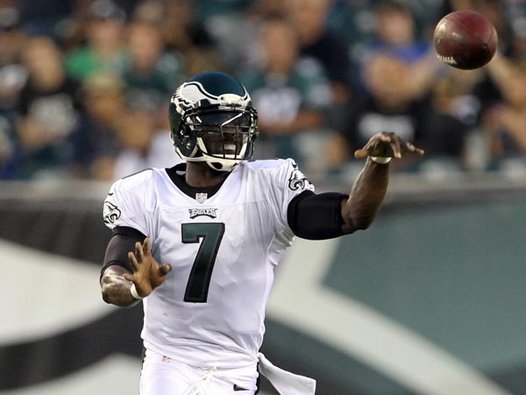 Thursday’s matchup with the Carolina Panthers will be the most important game of the preseason.

No matter what the Eagles do in the third game (their opponents are the dreadful Jacksonville Jaguars) one of the worst teams in the NFL.  The final preseason game versus the Jets is for the back-ups, at-least they are for most NFL teams, Chip may approach it differently.  The matchup with the Panthers will allow fans and media to see specific areas, testing “key” players that we are counting on for the 2013 season.   The Panthers have player personal and an offensive and defensive identity that will really test us.  By no means am I saying the Panthers are a good team.  I just personally see matchups they will bring that will test the Eagles in areas we need to see.  This is a great matchup; and the reason being?  The Eagles will be tested; and we need a better idea of what this roster has moving forward.  Below are five areas the Eagles need to prove themselves in.

1.  The impact of Eagles tight-ends versus the Panthers good line-backer trio

Luke Kuechley had a terrific rookie season, and will emerge as one of the best all-around NFL linebackers during his sophomore campaign.  Unlike the linebackers of our Philadelphia Eagles, he is a terrific tackler, but one of his biggest attributes is his ability to defend the pass.  Chip Kelly will have the opportunity to showcase his tight-ends when the opposing defense has the arsenal to stop it.  In addition to Kuechley, both Beason at the strong-side and Davis at the weak-side will look to take the middle of the field away from the Eagles quarterbacks.  This is a great early test for Kelly; and a big stage for Ertz, Celek and Casey to demonstrate their ability to create space when covered by the better linebackers in the league.

2. Eagles offensive line holding their own by a strong and athletic defensive front four

Lane Johnson and the offensive line will defend versus a big, physical and athletic defensive line.  The Panthers defensive front seven is a very solid unit, and was under-rated last season.  They bolstered their front line by drafting defensive tackle Star Lotelelie in the first round.  Their secondary is where the Eagles want to attack.

3.  Will the Eagles show the ability to stop the Panthers from running, running and running some more?

Panthers are a run team first.  We were gashed last week by the Patriots.  Williams is a shifty back, Tolbert big and physical.  6th rounder Barner adds depth to the backfield depth chart.   Should we mention the best ball carrier on the team is their 6’5” 245 lb quarterback?  If the Eagles are thinking long-term about returning to a respectable status, they will see more than just RG3 twice a year.  Seattle and San Francisco are going to be top of the class for many seasons to come, and although Kaepernick is big in stature while Russell Wilson is undersized, both will force the new hybrid 3-4 to show the ability to stop the run-option.

4.  With the Panthers having a poor wide receiving core past the aging Steve Smith, will the linebackers be able to contain a very good tight-end in Greg Olsen?

Olsen is fast, athletic and is able to play both the tight-end and wide-receiver position.  Who takes on the assignment of covering him?  We saw Kendricks get torched by a 5’9’ running back.  Olsen doesn’t have the speed of Vereen, but he can move and has excellent hands.  The Eagles have really struggled with the tight-end coverage for much of the past decade.  With an athletic and fast linebacker in 2012 2nd rounder Kendricks, Davis and his unproven defensive resume must show the ability to get the most out of their most athletic linebacker on the roster.

5.  Gap awareness by the Eagles defense

The 3-4 requires players to play smart, sure-tackling defense.  The secondary must be able to jam their man at the line of scrimmage and handle 1:1 coverage.  The 3-technique defensive ends must stick to their gap assignments.  Critical timing must be second nature, so the aggressive blitz schemes can put pressure on the quarterback.  As is stands, the Eagles defense looks awful in most areas.  There are more positions open on the Eagles defense then definite starters.  Who wants to start the season-opener?  Starters will be decided after Thursday night’s game.