Young Eagles Will Try To Finish Strong And Make The Team 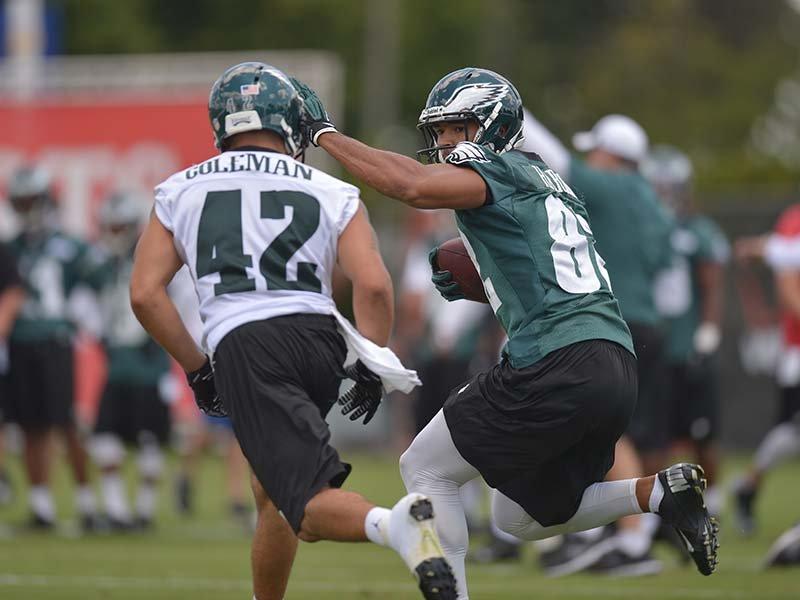 The “Turk” is loose this time of year in NFL locker rooms and that includes the Eagles.   He’s the guy, who comes up behind a player and says, “The coach wants to see you and bring your playbook”!!!  Unfortunately the Turk is going to bring out some tears from some disappointed players on Friday and this weekend.

Excellent special teams play and versatility are ways to avoid the Turk.  Making a couple of tackles on the punt or kickoff team, then proving to Chip Kelly that you can play two or three positions are all ways to keep the Turk away.

Everybody has been talking about backup tight end Clay Harbor being on the bubble, but I disagree.  I don’t think Harbor is going anywhere.  The fact that he’s been playing both tight end and wide receiver gives him a huge advantage.  He’s the fastest tight end they have on the roster, plus he’s done a good job on the special teams.  If they cut him, I’ll be shocked.

Harbor will play both tight end and wide receiver tomorrow night in North Jersey against the Jets.

I think you’re going to see a number of plays each game out of that four-tight end formation all year long.  It’s going to be a problem for league defenses to matchup against.

Harbor’s value will likely cost one of the wide receivers a job.  The Birds will be a bit heavy with tight ends and light on wide receivers.

Backup quarterback Dennis Dixon is likely to wind up on the Birds practice team.  If Michael Vick goes down, he’s the only remaining quarterback who could still run Chip Kelly’s entire system and help the running game with his mobility.  Remember this offense is all about the running game.  If you stop the Eagles running game, the offense is in trouble.

I was disappointed to see that the Birds waived outside linebacker Phillip Hunt, but chances are he will wind up on their injured reserve list and be back next year for another shot at a job with the Eagles.  He showed flashes at times, but didn’t stand out like I think he might capable of doing.

Backup outside linebacker Chris McCoy seemed to be a sure thing for most of the camp, but he was awful against the Jags.  They were targeting him, running right at him and the young linebacker didn’t put up much resistance.  It should have infuriated him but there was no fire from the young man.

The Birds didn’t solve the problem on that side of their defense until Emmanuel Acho came in game and put an end the problem.

Somebody needs to let McCoy know that he had better step it up tomorrow night or he’ll be on his way home soon.

Young free agent defensive lineman Damion Square needs have a solid performance tomorrow night at the defensive tackle spot.  He didn’t do much against the Jags, so he needs to finish strong against the Jets. His versatility will likely help him keep a spot on the roster, but he needs to show that the poor Jacksonville outing won’t be a common thing.

Safety Kurt Coleman isn’t going to be a starter at safety, so he needs to showcase his ability to play special teams.  Colt Anderson could Kurt Coleman’s chances if he Anderson plays well at the safety position.  They could hang onto Coleman, if Anderson, the team’s best special teams player, is unreliable at the safety position.  If Anderson plays well at safety on Thursday, it could mean good-bye for Coleman.

Former number one pick guard Danny Watkins is in trouble.  He started out strong during training camp, but he has faded and Allen Barbre has caught him and surpassed him.  Kelly has no allegiance to him because he didn’t draft him.  I’ve heard that Watklns doesn’t love the game of football as much as he loves firefighting.  He might soon get the chance to firefight full time.

Huge free agent offensive tackle Michael Bamiro has shown some promise but he’s a project, who will wind up on somebody’s practice team or bench.  I know the Birds would like to be the team that develops him, but a team might grab him off the Eagles practice squad.

ESPN: Robert Griffin III Will Start In Week One Against The Eagles