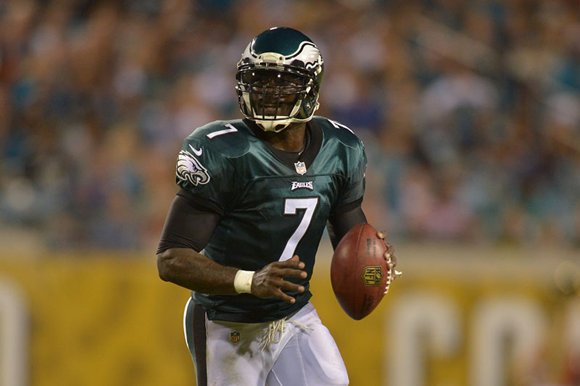 The quarterback depth chart will come as no surprise. This appeared to be set in stone from the beginning.

Matthew Tucker has had a really nice preseason, but I don’t see how the Eagles can keep four running backs. Tucker is a practice squad candidate.

Injuries to Jeremy Maclin and Arrelious Benn opened the door for guys like Salas and Shepard to make it.

I think the Eagles will find a way to stash Clay Harbor on the roster. He’s had a good camp, and his talent, versatility, and athleticism are traits that Chip Kelly won’t want to part with.

I don’t see how Danny Watkins makes this team. He hasn’t shown anything special, and he’d likely be inactive on gamedays anyway with the Eagles probably only dressing three lineman. Who would Jeff Stoutland rather have on the roster to develop? A disappointing first-round pick who is almost on the wrong side of 30, or a young guy with untapped potential like Bamiro?

Joe Kruger and David King are practice squad material. Curry and Geathers have both been pretty good in the preseason.

Antonio Dixon is the notable name that doesn’t make it here. He’s been vastly outplayed by Square and Logan.

Its time to say goodbye to Casey Matthews. The emergence of guys like Knott, Acho, and McCoy have made him expendable. Everette Brown played well enough to earn a roster spot as well, but I can’t see the Eagles keeping five reserve linebackers.

I don’t see how the Eagles can justify bringing back Curtis Marsh for another year. The third-round pick from 2010 has shown absolutely nothing. Brandon Hughes might get the nod over Lindley because of his special teams ability, but I think the Eagles have seen enough of Hughes as a cornerback and will finally give Lindley an opportunity after releasing and re-signing him multiple times over the past few years.

I have Kurt Coleman making the roster for now because I just can’t see the Eagles going into the season with Earl Wolff and Colt Anderson as their backups. They need some kind of experienced presence behind Patrick Chung and Nate Allen. If Coleman isn’t that guy, then I believe they’ll pick up another experienced safety elsewhere.

What Can The Eagles Do To Improve Their Roster Before The Season?

I prefer Coleman to Allen. Coleman has made more plays than Allen in the past three years and he will hit you. Allen is and has done the exact opposite of Coleman in the same time frame!!!

Really liked what I have seen from Acho, Knott and McCoy.

*** I do believe they look to add a CB & Safety which would replace Lindley & Coleman.. Lindley has actually had a nice Camp and is playing his best ball as an Eagle from what I have seen of him..
*** I also think that the 5th WR Position is a Toss-up between Sheppard & Salas and since the 5th WR will most likely be “inactive” for games, I believe they take Sheppard over Salas for his Upside Potential

On OL, I can’t see how Danny Watkins or Dallas Reynolds make this squad..
I could see OT Bamrino making the 53 Man Squad if they decide to place OL Dennis Kelly on PUP to start the Season which is a strong possiblilty since he had SUrgery a few weeks agao and may need another month before being into top Football shape.. Kelly has not suited up or played in a month so he will need some time to get up to speed

Here goes our first wave of cuts, no surprises.

Eagles will try to get DE King on Practice Squad if no one scoops him up
I am glad that DT Dixon, OL Reynolds are gone, both were not very good last Year and failed to impress this Sumer Camp/Pre-Season either..
With Tennant gone, this means that Justin Vandeverde will be back-up Center to Kelce who has not had a great Pre-Season in my opinion
OT Dennis Kelly will prossibly be a PUP list which can open up a Spot for
Bamrino or Tobin since they have been playing and are in shape since Kelly had mionor scoping Surgery a few weeks and is not up to speed yet

What Count are the Eagles down to Player Wise..

Who are the final cuts? and who do you perdict we pick up at CB Safety an WR per what i hear that is the FO focus

@ Paulman they are at 62 so they need 9 more cuts if i am not mistaken again not including any trades i wonder if we can go down to 52 with the hope of adding i know the max is 53 so i wouldnt see why not.

Trade Clay Harbor or Watkins for someone that needs that position or use a middle to late Draft pick next year for a player on a squad be it Safety Corner back i wouldnt mind any from the Bengals maybe Brandon Ghee or Taylor Mays. Or Leodis McKelvin. or we just stick with what we have

Trade Watkins for what, a used roll of TP? Dude is worth less, than worthless! Harbor won’t get anything either. Maybe a 7th. Byrd is a pipe-dream. Would be fantastic, but not happening. What gives you any inkling, that Weaselman can pull something like that off? He’s as clueless as his counterpart, Ruin 2morrow, across the street, at the bank.

Thinking the next moves are

What about Travis Long?

Woops, forgot to list him as a Release Player

This would bring to the Eagles down to 50 Players ..
Then they go out and add a CB, a Safety and a WR or OL

Love Maxwell,and Winston Guy, both would be serviceably better than Allen, and Chung…..

We’ve only been harping on Vaccaro & Cyprian, since before the draft. Too late now, Bruh!

I just can’t get over such a weak draft, after 14 years of failed picks…..going on 15 just to save face DCar.

cut travis long you will have 50 then add the WR/S/CB to complete 53 keepy Dennis kelly on the Pup and if no one is needed keep him stashed then go from there but if not barring injuries get more depth at the position. our PS will have alot of DT/NT CB/ Oline depth for in case

sorry that is 51 nvm lol

Curtis Taylor Was released. from Cards may be a good pick up for depth at safety.

Let,s sign Ras-I-Dowling – kid can play, but always hurt. Chip got to see him 1st hand when we had our joint practices.

I think the front office went too soft in FA this year. I know guys like Nnamdi and DRC didnt work out but thats no excuse for you not to try and improve your football club.

To win in the NFL you have to develop your own players but you also have to cash in on the right FA moves. The Saints signed Drew Brees and it literally change the entire franchise because of one move.

So what you made a bad move signing Nnmandi? pick yourself back up and try again. Dashon Goldston was out there, Sean Smith, Brent Grimes and yet we settled with Bradley Fletcher? makes no sense to me.

Agreed. When u gut a team, u need to bring in some playerz. Troy vincent, hugh douglas, both came via FA.

I still can’t believe how good Jaiqwan Jarrett looked last night, as bad as he was the past two years for us I thought he was out of the league, from what I saw, I would take him over Alllen right now. Lol

Jarrett is a trash truck juice smelling, stiff, playing for his NFL life! Cut it out! Allen blows too, but JJ is not better than him.

Atleast JJ will hit you with authority, Allen looks to grab you while someone else lays the lumber. Allen whiffs on a lot of plays because he does not want to get physical.

Some guys are different where it takes time to develop. Honestly does Philly ever have dumb luck like that? we have to be the most unluckiest town ever!

We have debates over whos the better QB Randall, Jaws or Mcnabb. none of these guys are hall of famers and yet these same crap cities like Indianapolis, New Orleans, Green Bay will be debating for years to come about their quarterbacks!

I wish we never drafted Donovan Mcnabb because he’s held this city back for decades now. The possibility of us having Aaron Rogers or Drew Bress or Ben Rothlisburger. lead this city to a championship out weighs 5 stinking NFC championships and a loss in the superbowl.

Im pissed off damn it!!

I also perfer coleman to allen .. but i think coleman plays the same side as chung who is our best ..

@andrew p its been like that all camp.. theyve been syaing hes been hitting people and making them forget all about laron landry…. The eagles play too many Effing games. they wre fickel with the safety position switching the names SS FS and then they said they are interchangable,, You cant do that to a rookie you need to simplify..

I said he and Brandon Graham has been victimized by poor coaching and the way they have been handled here in the past. No consistency to allow them to develop properly..