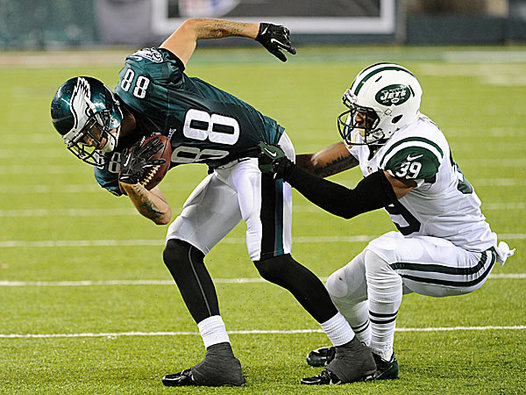 Eagles head coach Chip Kelly says the main reason he kept certain backup players on the roster is because of their contributions on special teams.

That sounds reasonable, but quite a few heads turned when some of the final cuts were made.  Today Kelly was asked whether he gave consideration to players who played for him in Oregon.

I know Kelly says keeping Matthews and Maehl had nothing to do with the fact that they played at Oregon, but I can’t agree with that.  I don’t think Kellyt has to apologize for making his decisions, but coaches never forget players that they win with.  Just about every coach I’ve ever seen tries to hang onto players that they won with and Kelly is no different.

NFL Headache: Do QB’s Lose Their Rights As Pocket Passers In The Read Option?

Just a Question out to everyone..
With WR/Returnman Damarus Johnson’s very productive Pre-Season in the Return Game, does anyone think it’s a bad or highly risky idea having D-Hax Return Punts (Unless naybe a game is on the line)
With Maclin out for the Seadon, I am not sure it’s a good idea to your #1 WR and only true Deep Threat out there on Punts..
Any thoughts on this…

But You don;t worry about The QB and offensive style Leading to a possible Funeral for him?

Get the heck out. This is Crap. Kelly will be back in college sooner rather than later. I really had hoped for better than this. I was all up on the GUS bus too then allowed the chipper to tell me he could design an offense and Defense to fit his personnel then he chooses to run his high school harry crap.

I don’t think being second in the league since 2008 is that easily replaced. Is he the big, strong wrsuch as Larry Fitzgerald or Anquan Bolden? Nope, nor should he be asked to perform like them, just as they will noy be asked to do things that he can do and they can’t. I will always appreciate D Jax because I remember the WR horror show we had under Ray Rhodes and Andy Reid unti Jackson got here.

second in the league in receiving yards.

If you gonna ask the coach a question and understanbably know why a false answer is given, then why ask the question at all?

Is it like the police confession thing? You keep denying it, but the cops know you did it, yet wants the confession out of you.