Eagles Defense Had No Answer For Phillip Rivers And The Chargers 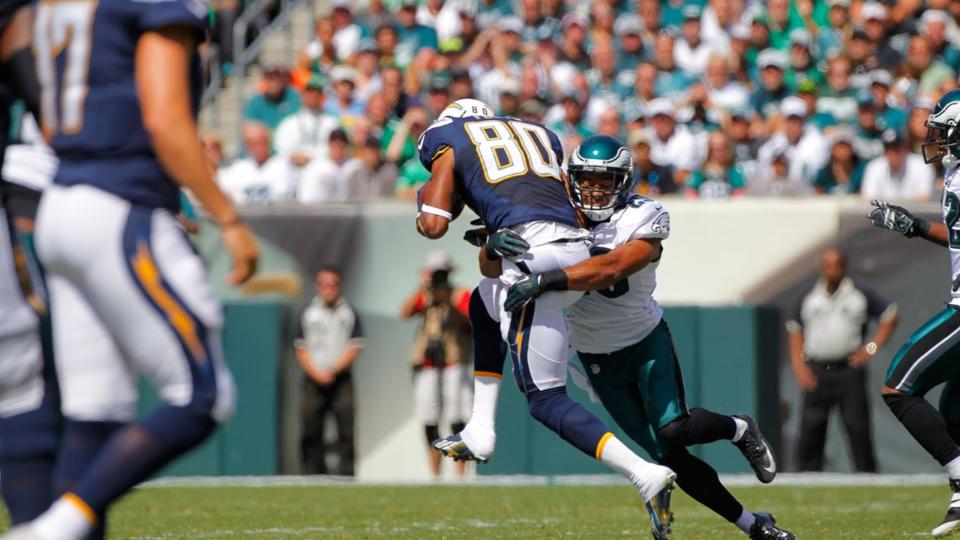 G. Cobb – Eagles defense lost on 3rd down[media id=349 width=480 height=360]The Eagles defense must play much better than they did today if the Birds are going to win many games.  It’s not a shock to me that the secondary was picked apart today by Phillip Rivers, but I expected the pass rush to put more pressure on Rivers.

They’ve got to find a way to get defensive tackle Fletcher Cox in a man-to-man situation.  He’s their best defensive lineman and he’s got to be more effective.  They should abandon the two-gapping every chance they get.  They’re not stopping anybody without a much better pass rush.

Rivers dropped back to pass 48 times and the Eagles pass rush was able to get one hit on him, which resulted in a sack by linebacker Connor Barwin.  That is just not good enough.  He completed 38 of 47 throws for 419 yards and three touchdowns for a 124 quarterback rating.  The Chargers gained 545 yards total yards.  They scored 33 points despite turning the ball over twice inside the red zone.

It seemed that Rivers was in total control of the game.  He detected the Eagles blitzes and made the adjustment to give himself time to make all the throws and completed pass after pass over the middle.  The Chargers receivers were too much for the Birds secondary.

“Couldn’t get them off the field”, head coach Chip Kelly said.  “We have to do a better job generating the pass rush.  We went up against an outstanding quarterback.  Good, pass‑catch combination with him and Gates, and didn’t seem like we handled that very well.”

Rivers was able to hook up with Antonio Gates on 3rd downs with no problem.  The Chargers converted 10 of 15 third downs, which is extremely high.  The San Diego quarterback was able to get the ball to Gates 8 times for 124 yards in his matchup with linebacker Mychal Kendricks.

The young linebacker has to learn to read the routes and backoff of a big receiver, so he can’t push off to get open.  He’s got to learn to change up his strategy from play to play.  On some plays, he should play off of Gates, then at the last split second before the ball is snapped, he should fly up and jam him.  You can’t let the offense know where you are and what you’re doing every play or you’re dead.  He has to go into the game with a strategy.

The quarterback  also got the ball to Malcolm Floyd six times for 102 yards, before he was carted off with a head and neck injury.  Fortunately, he’s okay, but DeMeco Ryans popped him when he was wrapped up.  Right cornerback Cary Williams, who was supposed to be guarding Floyd and had played so well against the Redskins was called for pass interference three times.  Each time he had a handful of the receiver’s jersey.  Trust me, I watched Williams throughout the off season workouts and training camp and he’s not a great man-to-man coverage cornerback.  He’s best when he’s beating up wide receivers at the line of scrimmage or sitting in a zone.

Safety Nate Allen was beaten all day.  He’s just not physical enough to play safety.  The Chargers were running a rub or pick play all day long, but Allen and the defensive backs never adjusted.  You have to play with an in and out call, so that you switch the man you’re covering.  Allen is always getting pushed around, as was seen on the play where Chargers running back Ryan Matthews straight-armed him to the ground.

Still the key of the game for the Eagles defense was how they had no answer for Rivers.  He was able to complete easy passes on short and intermediate routes.

“Phillip Rivers just seemed to know everything that we were trying to throw at him,” Williams said.

Billy Davis must give middle linebacker DeMeco Ryans the power to change the defense.  If the quarterback is going to make adjustments immediately before the play, then you’ve got to counteract that by showing him a certain blitz look, then getting out of it.  The defensive coordinator must have enough confidence in the defensive signal caller to allow him to play the chess game with the quarterback.  The other defensive players have to be savvy about disguising the coverage.

Brandon Boykin, who started at left cornerback in place of the injured Bradley Fletcher, had a solid game in coverage, plus he made a huge play by stripping the football from Gates inside the ten yard line.   He was beaten a number of times by Chargers receivers, but each time he was standing there right by the guy with tight coverage.  I think he should be the starting left cornerback because he’s the best coverage cornerback on the team.

Linebacker Trent Cole forced the other big turnover inside the red zone, when he stripped Ryan Matthews of the football.  It was a huge play at the time, but he wasn’t heard from much after that.  The Chargers were playing with a rebuilt offensive line.  Three of the five starters were new and former Eagle King Dunlap was the starting left tackle.

Rivers went to speedy and quick Eddie Royal when he got in the red zone as they connected eight times for 90 yards and three touchdowns. The Birds had no answer for Royal, who is extremely tough to cover in one-on-one situations.

Davis and the Eagles defense are going to need to blitz teams and find a way to turn their pass rushers loose.  He said they tried plenty of blitzes, but they’re going to need to change things up, by faking one blitz and coming at the opposing offense with something else.  Yesterday he was beaten by Rivers and the Chargers offensive coaches in the chess match.

“Three-man rush, four-man rush, five-man rush, six — we threw everything at them,” said Davis. “We tried to change it up, bluff blitzes and fall back. Phillip had a better day than we did.”