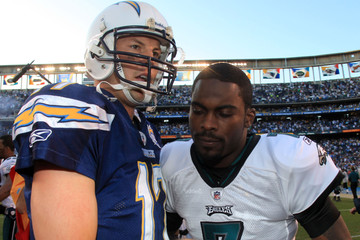 Apart from the electric offensive showing from Monday night, what many people were impressed with was the effort of the defense, which created a handful of turnovers and didn’t allow the Redskins to score any offensive points until the end of the third quarter.

However, the Eagles faced a completely different animal today. They faced an average NFL quarterback with a history of turning the football over. They faced average receivers and running backs. They faced an offensive line that featured the likes of King Dunlap. And the mediocre Charger offense demolished Billy Davis and his defense for 33 points and over 500 yards.

This was probably the worst defensive performance that the Eagles have put on in recent memory, and that’s saying a lot.

Even when Rivers’ top receiver, Malcolm Floyd, left the game with an injury, the Eagles couldn’t do anything to slow the Charger passing attack down.

Davis called a very timid game, rushing just three and four defensive lineman for most of the game. As a result, the pass rush wasn’t nearly good enough, and Rivers’ timing was seldom rarely challenged or disrupted. The pass coverage was soft, and anytime Rivers needed to make a play he was able to pick out the weakness in the Philadelphia secondary and exploit it.

The Eagles gave up 33 first downs. The Chargers held the ball for an absurd 40 minutes and 13 seconds. San Diego converted 10 of 15 third downs. They allowed two touchdown drives of 80 yards or more. When they needed a stop, the defensive coordinator and his unit came up short, time and time again. The defense forced just one punt, and if not for a couple of clumsy turnovers by the Chargers before the end of the half, San Diego could have easily lit them up for more than 40 points today.

Michael Vick was far and away the Eagles’ best player today.

The veteran quarterback threw for a career-high 428 yards and two touchdown passes, and also added 23 rushing yards a touchdown run.

Vick was absolutely electric. He looked relaxed and focused throughout the game, and had no problem finding open receivers. Most of his passes were things of beauty today, hitting his targets in stride for big strikes and the quarterback provided the spark that brought the Eagles back into this game and gave them a chance to win.

Vick picked the San Diego defense apart through most of the day. The turnovers and mistakes that have plagued him in the past have been nowhere the be found. He’s been sensational through the first two games.

As a team, the Eagles just weren’t mentally sharp today.

Lack of focus, mental mistakes, and penalties killed them today in all three phases of the game.

Possibly the most critical mistake belonged to DeSean Jackson, who drew an unsportsmanlike conduct penalty following the Vick touchdown run that helped give the Chargers a short field, setting up a late San Diego score. Jackson needs to his attitude under control, and act like a professional. Acting like a tough guy is all well and good, but when you take it too far, you wind up with nonsensical penalties like this.

Cary Williams was a hero in Week 1, but he had an absolutely horrendous game today. Williams drew three penalties, extending several San Diego drives, one of which led to an eventual touchdown. The former Raven was also caught overpursuing at times, and missed several tackles.

Newly-signed tight end James Casey dropped a touchdown pass on third down on the team’s opening drive, forcing the Eagles to settle for a field goal instead of a touchdown. Casey was unhappy with his playing time in last week’s game, but was unable to come through when his number was called this week.

Nate Allen was awful as well. The safety was run over by Ryan Mathews on first Chargers play, and was only able to take Mathews down by drawing a 15-yard facemask penalty. Allen was obliterated by former Eagle King Dunlap on Eddie Royal’s third touchdown of the game.

Alex Henery missed a field goal before the first half that wound up costing the team.

A week ago, I wasn’t impressed at all with what the Eagles’ defense had done against Washington. I thought that the defensive success was more a product of the Washington Redskins shooting themselves in the foot repeatedly than it was done on the Eagles’ own merit.

We saw this week that the Eagles’ defense is still very much an issue, and the fact that they were gashed this bad by such an average offense is really alarming. Its the pinnacle of ineptitude and inefficiency, and this is the defense that you’re going to see more often than not.

To be fair though, the defense isn’t entirely to blame for how badly they performed. Part of their struggles has to be attributed to the Eagles’ offense as well. The high-powered, fast-paced offensive is all well and good, but I think today they actually scored too quickly, not giving the defense enough time to rest and recover.

Look at the amount of time that the Eagles’ offense was on the field for during their scoring drives. The first drive that ended in a field goal took only 1:56. The Riley Cooper touchdown drive lasted just 1:20. The DeSean Jackson touchdown came on the second play of a drive, and only ran off 26 seconds. The Michael Vick touchdown run only took 3:14. The tying field goal at the end of the fourth quarter only ate up 1:20, and left the Chargers with two minutes to work with.

The fast-paced offense was the reason the Eagles were in the game today, but it was also a bit of a detriment. Chip Kelly needs to change his tune on his beliefs concerning the importance of time of possession. The game isn’t all about how many points you can score and how quickly you score them. You must consider the state of your defense as well.

Eagles Defense Had No Answer For Phillip Rivers And The Chargers