How Will The Offense Look With Nick Foles On Sunday? 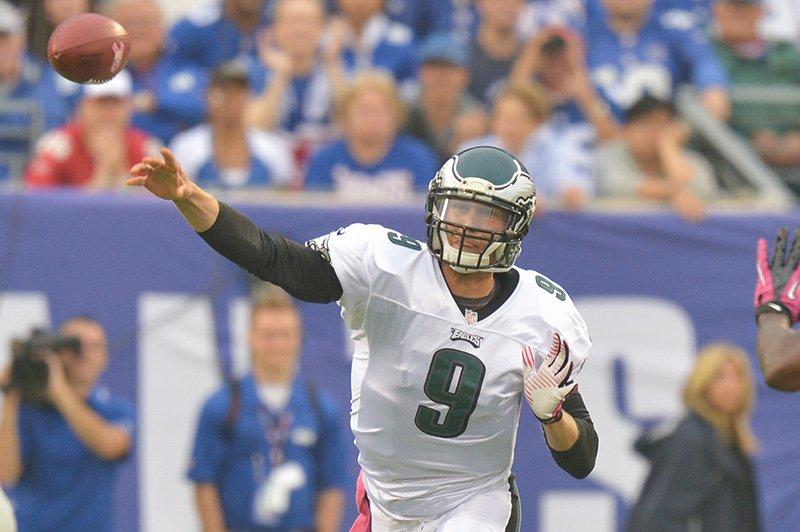 Can’t we be happy that we won our second game of the season?   Find some closure in sharing a lead for first place in our division?  No, we can’t, we have a record under .500, our starting quarterback is injured, and there are still noticeable flaws not being corrected on the offensive and defensive side of the football.

Quarterback controversy has returned, even though there should not be one.  Vick is injured; Foles is second on the depth chart.  When Vick is healthy, he regains his starting quarterback status.   Look too deep into what the coach says, and you could come away with the notion that if Foles has back to back 300 yard games like Mr. Kolb did a few years back; we may have a changing of the guard.  Kelly has a lot of fun with the media; it’s entertaining to say the least.

Foles is a game-manager who has nice touch to his throws.   I feel our offense simplifies when he is the signal caller, as the coaches are lest forceful with trying to make the big play only.  When McNabb went down and Garcia became our quarterback, the play-calling changed but the offense was still able to be successful because it still had weapons that could beat the opponent.  Foles does not have the ability to create plays with his legs, but he is able to keep plays alive due to his size at the quarterback position.

No longer should the run-option be featured.   Foles can’t run and other teams know that.  Our offensive line and running backs are talented enough to continue being a top five running team without featuring run-option formations.   Spread the receivers and put players in motion.  Increase the screen-passes, and utilize players that are not getting the snaps needed to make a weekly contribution to this team.  Casey and Ertz must be featured as part of this offense.  We know what Cooper and Avant bring to this team.  The film on these two veteran players is simple and short.

I just can’t point my finger to why we continue to ignore the multiple positions that Ertz and Casey play.  Wasn’t the reason we drafted one in the second round and signed the other to a substantial contract was to disguise” and create the miss-match.  This was supposed to be the one area that Chip Kelly would bring, the one we saw in the up-tempo and new style of player, several weeks ago.  We expected changes to be made from that Redskins game, but not for it to be something completely lost moving forward in Kelly’s first season.

On the defensive side of the football, it’s no secret that our secondary is bad.  We are going to see everyone get their fill-in at the safety and cornerback positions.  Besides Boykins who I really think has played solid throughout the season given what he has as help around him, the rest of our secondary depth are merely stop-gaps. I understand Kelly’s philosophy is to not let us get beat on the “deep pass” but the middle of the field remains open for feasting like a returns trip to an all you can eat buffet.

We need to blitz not from the inside gaps where players are still learning the 3-4 technique, but from the outside and with the overload looks.  Blitz with the athletes on the field.  Barwin and Kendricks need to be utilized better.  Curry and Logan showed us a lot in the pre-season, where have they gone? Cox was the most “polished” we felt was on this defense, and he has not been utilized correctly.  Making the “transition” to the 3-4 does not mean abandoning the 4-3.  Mr. Bill Davis who unlike Kelly has the NFL experience, needs to slow down on what he “plans” to do with this defense, assess what is best for the present, and relieve the constant pressure on the offense to score every time they have the football.

I get that Kelly is going through the “learning cycle” of the NFL, but his veteran coaches should be assisting, instead they are passive almost fearing their future could be in jeopardy if they speak up to the all-mighty Chip Kelly.  Do the job that you were paid to come in here and do.

If the Eagles utilize the pieces necessary to best suit what their current roster actually is, they win Sunday and the three games to follow.  Whether it’s Foles or Vick, a combination of the two, the Giants win was the start to our five game winning streak.  I’ve attempted to erase the tease that was the Redskins game.  I almost wish what we all observed was never shown to us.  I’m tempted to allow myself to believe that could once again be what our offense looks like for an entire season.

That moment has come and gone, but the season is still new.  A very strange five game start to a season with already so much up and down.

Did we expect more or less from the first season post Andy Reid with a rookie coach in charge?

Mason Carries Flyers to First Win of the Berube Era