Mason Carries Flyers to First Win of the Berube Era 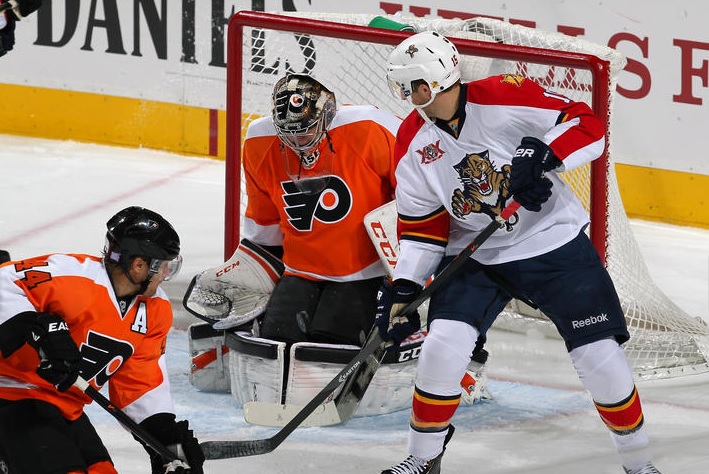 Standing with his hands on his hips, no suit jacket and loose tie, newly minted head coach Craig Berube responded to a reporter asking if he felt the Philadelphia Flyers looked like an improved team following their 2-1 victory over the Florida Panthers on Tuesday night.

It may not have been the most elaborate response, but there really wasn’t much to be thrilled about following the first game of the Berube era for the Flyers.

As his first order of business earlier today, Berube threw the previous top two lines along with all of the defensive pairings to the wind. Wayne Simmonds moved up to the top line while Jake Voracek bounced to the second along with Brayden Schenn. The defense included a reunited Kimmo Timonen-Luke Schenn pairing, a “shutdown pair” of Nicklas Grossmann and Braydon Coburn, and a puck-moving pair of Mark Streit and Andrej Meszaros.

The result? About as ugly of a win as you can get, but a win is a win. The Flyers desperately needed to earn one on the black side of the ledger and they stopped the bleeding.

The effort that both the fans and the front office have been looking for was sporadically visible, but the Flyers’ success was owed as much to Panther’s goalie Tim Thomas putting on a schizophrenic performance more than anything else.

At the 4:49 mark, Jake Voracek let a wrister fly from the blue line that caromed off the back boards and through the Panthers’ crease. Thomas misread the bounce, pulling himself out of position, and Brayden Schenn finished his shot cleanly.

Less than three minutes later, Thomas appeared to fall to the ice after a routine shot, and then dove back to the crease while Coburn simply fired the puck at the empty net. Thomas immediately skated away, slamming his stick against the boards and leaving the ice of his own accord.

Jacob Markstrom replaced him, and as of this post, all that is being said is that he has a “lower body injury.” Considering Thomas has allowed nine goals in three games since formally returning to the NHL and seemingly made his own personal decision to leave tonight, the only real injury may be his pride.

The first period aside, there wasn’t much to be happy with. The penalty kill looked strong again, including a four minute stand in the beginning of the third period after enforcer Jay Rosehill made a poor on-ice decision. Initially called for a roughing penalty, Rosehill headed to the sin bin before noticing a scrum beginning to break out near center ice. Rosehill skated full speed and jumped a Panther from behind, at which point he was promptly ejected.

“I thought it was a weak call originally,” said Berube, “And then what he did after was unacceptable. He can’t do it. He knows that.”

[This was followed up by a reporter asking, “Do you have a punishment in mind of some kind?” To which Berube answered,  “You want me to spank him? Get lost. Stupid question.”]

The Flyers killed twelve minutes in penalties, but were compensated with fifteen minutes of powerplay time, including a 5:00 powerplay in the third period after defenseman Erik Gudbranson made a hard check against forward Scott Hartnell that caught the Flyer in a vulnerable position.

With all of the firepower at their disposal, the Flyers generated virtually no offense with the man advantage.

Even strength wasn’t much better after the first period. The Panthers finished the game with 34 shots on goal and held a wide margin on shot differential throughout the game.

Honestly, if it wasn’t for goaltender Steve Mason putting on a clinic, this would have been a blowout.

Mason carried the Flyers almost entirely on his own. He stopped a breakaway attempt by Shawn Matthias after Kimmo Timonen made a poor poke check at the Panthers’ blue line during a powerplay in the second period.

The crowd at the Wells Fargo Center showed their support with a standing ovation after Mason made back-to-back saves on 2013 2nd overall pick Aleksander Barkov and veteran defenseman Ryan Whitney. Mason finished with 32 saves on 34 shots and earned the “first star” of the game.

The acquisition of Mason from the Columbus Blue Jackets last season set off some alarms as to the future of the team’s goaltending, as Mason had not performed consistently well in years. If Mason plays like this on a nightly basis, though, it will buy Berube some time to sort out the mess in front of him.

At the other end the spectrum, Andrej Meszaros played another average-to-regrettable level and deserves to sit a game. A poorly timed, lazy cross-checking/boarding penalty and a nearly disastrous turnover from behind the net midway through the game warrants some time in the press box.

One way to kill complacency and improve urgency is to force players to earn their ice time, and Erik Gustafsson should be playing on Friday with the way Meszaros has performed.

Berube has a ways to go to prove he deserves the opportunity he has been given here, but it’s also going to take time to put all the puzzle pieces together.

Time, unfortunately, which the team only has so much of.

Eagles Started Running Pick Routes In The Second Half

How Will The Offense Look With Nick Foles On Sunday?

New coach, same ugliness! If it weren’t for Mason playing like Roy, we would have gotten blasted. This might be the slowest, untalented, undisciplined hockey team, that’s been here in a long time!

Lecavalier and Schenn are the best line switching Vorecek and Simmonds made no difference. Giroux and Hartnell are not playing well.
Coburn’s game winner from Couturier ( never would have come up with that combination in a million years for the season saver )
Rosehill and Rinaldo almost blew it with those foolish penalties ( totally unnecessary) which lead to a 4 minute double minor penalty while the Flyers are holding onto a one goal lead.

Man, your sources are way better than mine